Pioneers Wanted Their Money Back

I recently obtained my Israel Tour Guide license. During the two-year course, I visited almost every site of interest throughout the length and breadth of the country.

I am often asked which of the many sites I enjoyed the most or which gave me the greatest pleasure. While naturally fascinated by the classical Roman sites of Caesarea and Bet Shean, the Hasmonean/Herodian sites of Masada and Herodium, and of course, the eternal city of Jerusalem, the site that evoked the most passion in me was undoubtedly Merhavia.

Merhavia was the first communal Jewish agricultural settlement in the Jezreel Valley.

The introductory movie shown at the Visitors' Center made a fleeting reference to a little known story of four young pioneers and their families, who in 1911 turned up at the gates of Hatzor Merhavia, the Great Courtyard of Merhavia, hailing from my hometown of Glasgow, Scotland.

My curiosity was whetted, and following my visit I was eager to research the story further.

My first port of reference was the book, Jewish Glasgow, which states: "The first Glasgow Jewish attempt at practical settlement in Israel started in 1909 when a group of families began saving with the view to establishing an agricultural village to be called Merhavia. This activity was almost unique among Western Jewish communities… "

It is a known fact that there was little aliyah from Western Europe at that time, let alone from the small Jewish community of Glasgow situated on the western edge of Europe. So how did it all come about?

The story dates back to the late 19th/early 20th century, when a large influx of Lithuanian Jews went to Glasgow, taking with them a strong Zionist commitment. Glasgow became a popular venue for Zionist rallies.

Research into material from the Jewish Archives in Glasgow disclosed that in 1909 a group of like-minded Zionist friends got together and formed the Glasgow Agudas Olei Zion. They began saving and collecting money to help establish a collective agricultural settlement in Palestine. At the end of that year they held a public meeting, and to their amazement 12 families transformed the idea into a reality by signing up and committing to go to Palestine.

In 1910 Professor Franz Oppenheimer, a German socialist economist, on hearing about the group, went to Glasgow to meet them. He was so impressed by their commitment that he introduced them to his scheme for an agricultural communal settlement, known as a Co-operazia, an idea he had proposed to Herzl in 1904, in which he saw the embodiment of his Altneuland.

This was the first such initiative by a western Jewish community and was greeted enthusiastically by the Zionist Organisation and Dr Arthur Ruppin, their representative who was based in Jaffa.

Each member of the group committed to raise £6 annually, to be sent to Rupin and invested with the Jewish Colonial Trust to buy land and agricultural equipment and to build homes.

The area/site chosen for the new agricultural settlement was near the village of el-Fuhle, at the foot of the biblical Givat HaMoreh in the Jezreel Valley, on land which had just been acquired by Yehoshua Hankin in 1910 from the Sursuk family in Beirut. The settlement/courtyard was to be known as Hatzer Merhavia (meaning wide open space) and was designed by Alexander Brawald in the German farmstead style. 400 dunams were set aside for the Glasgow contingent

In November 1911, a year after Merhavia was first established the group of four young pioneers and their families turned up from Glasgow with all their worldly possessions. They were a bedraggled group of 19, comprising four young men, their wives and children.

The valley was desolate and the land was harsh, inhospitable and malaria-ridden. There was no accommodation for the pioneering families and they had to live beside the well, in abandoned mud-brick huts with straw mat roofs, freezing in winter and experiencing very hot temperatures in the summer. Conditions were harsh.

Through the auspices of the Jewish Archives in Glasgow, I sourced a copy of a letter written in Yiddish dated 21st May 1912. It was written from Merhavia on Glasgow Agudas Olei Zion headed notepaper, and was signed by Lewis Coorsh, one of the four pioneers who had arrived the year before. It was to be paid into the Anglo-Palestine Bank by Glasgow Agudas Olei Zion 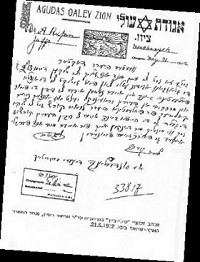 The 1912 letter asking for the money to be returned

There was clearly a story behind the letter.

By 1912 those still in Glasgow had each paid £18 to the Jewish Colonial Trust, but when word got back about how hard life was in the new settlement, they were reluctant to follow, and with typical Scottish/Jewish chutzpah asked Lewis Coorsh to write a letter to Arthur Ruppin requesting their money back …… and that is the story behind this letter.

Joseph Sunderland, one of the pioneers, was sent back to Glasgow to present the case for continued support, but it was sometime before there was sufficient money to build houses. A little more money was raised and a few more pioneers came out, but the settlement was unable to survive and was disbanded shortly after WWI. Perhaps the time was not quite ready for such a bold initiative, but it did set the stage for the Kibbutz/Moshav initiative which followed some 10 years later.

In 1922 another pioneer turned up at Merhavia - Golda Meyerson, (Golda Meir) and her husband Morri, who lived there for a few years. In her autobiography, My Life, Golda describes the still difficult conditions of the early 1920s.

So why do I feel such an affinity?

My grandfather arrived in Glasgow in 1903 with his landsleit from Zagar in Lithuania, amongst whom were these pioneers. He may have been a member of Glasgow Agudas Olei Zion - I don't know- but what I do know is that he was a friend and relative of those involved in the project. My grandfather never made it to Israel, let alone Merhavia, but I do know that, like me, the children and grandchildren of several of those involved in the project are now in Israel living the dream of their grandparents. I am proud of the part these early Zionists played in supporting Merhavia, and have much admiration for my grandfather's pioneering cousin, Lewis Coorsh, whose descendants are still living there.

That's one of the reasons I really love taking visitors to Merhavia.

The story of Merhavia is told in the booklet, Story of a Dream by Arye Guttman, one of the four pioneers.