Pianist Omer has talent to succeed 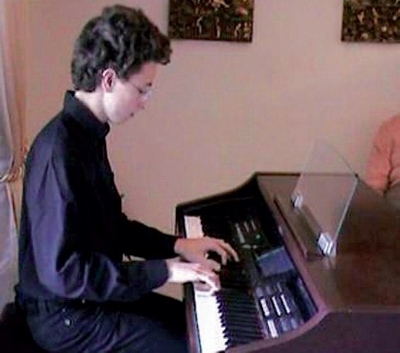 The setting given for an afternoon tea party – British style – was the beautiful house of Averis and Leon Leboff in Caesarea. With open hearts, they offered our ESRA Caesarea-Zichron branch their hospitality to stage the tea party. After visiting them to discuss arrangements and seeing the ground floor entertainment area which leads into a verdant garden, the digital piano in the corner lit up a thought in my mind. What about an afternoon tea enhanced by a piano concert? And if the young pianist I immediately thought of could come along and delight the audience, it could be a heart-warming occasion.

So it proved to be. Some sixty guests tucked into the goodies set out on tables and enjoyed the typical afternoon tea cuisine that was prepared and served by our committee members. Dainty sandwiches, scones and clotted cream with berry jam, fruit tartlets and a variety of home baked cakes were downed with gusto as the guests mixed and mingled. The highlight of the afternoon was indeed the concert, which was performed by the talented young pianist Omer Barash. Omer comes from Yesud HaMalah in the Upper Galilee and it was at one of the end of year concerts at the Clore Center for Music and Dance in Kibbutz Kfar Blum that I first heard and was captivated by Omer's talent.

Omer began to play of his own accord at the age of five, encouraged by his grandmother Eva who was convinced that he had a musical ear even at that early age. After an introductory period of lessons at the Clore Center in Kfar Blum, Omer continued to study under the tutelage of a private teacher before eventually returning to Kfar Blum where he studied at the Conservatory for another three years. Omer says that during that period, he discovered the power and attraction of various composers and by the time he was just 14, he knew that music was the calling of his life.

Aged 15, he was accepted to continue his studies at the Israel Arts and Science Academy (IASA) in Jerusalem, where he studied for the next three years. He tells of the pressures of the intensive work that brought not only challenge and competition, but also friendship and support from other students. He now realizes the importance of those years in forming his determination to continue and to succeed. His final year of study there was the most important because he so wanted to succeed, to follow his ambition and dreams and to be given the award of Outstanding Musician that he could take forward with him into his army service. His hopes and all the hard work brought achievement and he now enters the years of army service in conjunction with studies for Bachelor of Music at the Jerusalem Academy of Music and Dance.

Omer says that over the past three years, he has had to make a growing number of public appearances which have brought him more and more confidence and pleasure from the enjoyment and appreciation of the audiences. During the coming years, Omer will be given permission by the IDF to make public performances and he is only too delighted to do so – most especially if it is for a good charity cause. And so, he travelled down from the Galilee to delight our audience at the ESRA tea party, and was happy to gain more experience in appearing and pleasing his audience.

We wish him every success.