Oklahoma! was a Groundbreaker 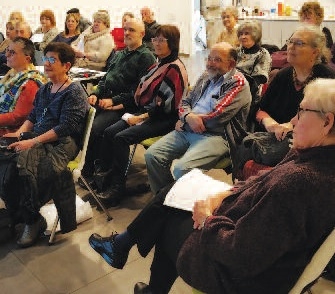 The audience enjoying the talk

Once again, Louise Stobicki educated and entertained ESRA Rehovot and guests with her perceptiveness of the social and cultural clashes depicted in the Broadway musical genre, this time focusing on the Rodgers and Hammerstein's ground-breaking creation, Oklahoma. Previously, Louise had presented in-depth insights into the social issues threading through South Pacific and West Side Story, highlighting how the lyrics informed the audience of the story line. She indicated that Oklahoma, Rodgers and Hammerstein's initial collaborative effort, was the first such musical to fully integrate the musical numbers into the story line.

Opening on Broadway on March 31, 1943, the show served as an important uplifting contribution to an America that was heavily engaged in the Second World War, at a time when its outcome was uncertain. When Curly, the hero of Oklahoma, sings at the end of the production, "We know we belong to the land, and the land we belong to is grand," the studio audience was able to leave the theater with renewed confidence that the U.S. and its allies would be victorious in the war effort.

On the darker side, Louise related how "the other," Jud, the nominal villain of the production, was depicted as a bitter, underclass loner with an appetite for drink and pornography, and how his role in the movie version was modified to eliminate any sympathy we might develop for the character. Also, behind the scenes and not part of the script and lyrics, was the ever-present conflict raging between the native Americans and the U.S. Government via the western settlers, and the expropriation of Indian land. As Louise reminded us, this was not the message that 1943 America wanted to hear.

With song sheets and videos of some of the numbers from the movie version, to paraphrase from R and H's State Fair, It Was a Grand Night for Singing, and from Carousel, And We All had a Real Good Time.