Not by Bread Alone 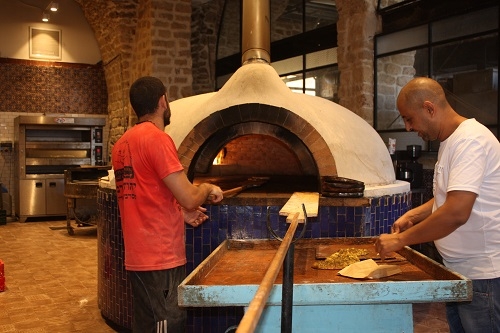 On the breadline ... busy at work at the Abulafia Bakery in Jaffa.

One of the most iconic places to visit in Jaffa is the renowned Abulafia bakery established in 1879, located on Yefet Street, an area where Jews and Arabs run businesses cheek by jowl.

I assumed that Abulafia was an Arabic name – Abu meaning father, affia meaning health or well-being. But apparently the name was also used by Sephardi Jews from the time when much of Spain was ruled by Arabic-speaking Moors from 711 – 1429, the so-called Golden Age when Moslems, Christians and Jews could follow their own religion and everyone lived in harmony (The Convivenzia).

Several prominent and influential Jews living there bore the name Abulafia. Meir Abulafia was the scion of a wealthy family and a renowned Jewish scholar so highly regarded that when his father died in 1225, he was honored by receiving his father's title of Prince ('Nasi').

Abraham Abulafia, born in 1240 in Zaragosa, learned Bible and Talmud as a child but at age 18 began a life of wandering after his father died. His first trip was to the Land of Israel where he hoped to begin a search for the Ten Lost Tribes, but owing to the chaos and lawlessness following the Crusades he got no further than the port at Acre. Back in Europe, he once more immersed himself in study and, being articulate and charismatic, attracted many followers, eager to learn of his writings on Kabbala and philosophical matters.

On returning to Spain, he concentrated on the study of mysticism and began having visions. In answer to an 'inner voice', he left for Rome with the intention of converting Pope Nicholas 111 to Judaism on the day before the Jewish New Year, 1280. The Pope ordered 'this fanatic' to be burned, but then died suddenly from an apoplectic stroke. Abulafia was imprisoned for only four weeks and then released, after which he started claiming to be the messiah. He continued writing until around 1291, but then all trace of him disappeared. However, his esoteric works are still read and were published in full as recently as 1990 in Mea Shearim, Jerusalem. 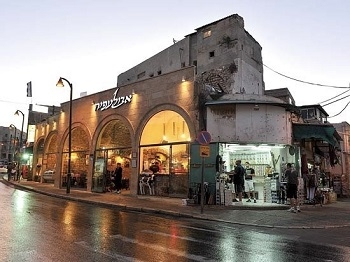 The familiar site of the Abulafia Bakery in Jaffa

A third Abulafia of note was Samuel Ha Levi, member of an illustrious family that served the Castilian Christian kings for generations. In 1356, he was permitted to build a family synagogue, the El Transito in Toledo. He defied all the laws that synagogues must be undecorated and no larger or higher than any church, presumably with the tacit consent of the King. El Transito was famous for its rich stucco interior and compared to the Alhambra in Granada and the Alcazar in Seville. After the Expulsion in 1492, it became a church, then a national monument in 1877 and in 1910 it was restored to the Jewish community and is known officially today as the Sephardi Museum.

Following the Expulsion, some of the Abulafia family settled in Safed in the Land of Israel where they established a rabbinic dynasty and later in Tiberias, where Rabbi Haim Abulafia helped to found the community. The Sephardi synagogue bearing his name remains the main one in the town to this day and his tomb is a place of pilgrimage.

In 1907, his great-grandson Shlomo built a house in Neve Tzedek at 2 Rokach Street. Around this time a young man named Shmuel Yosef Czaczkes arrived in the country and rented a small attic room in their home. He later became known as Shai Agnon, the writer. Shlomo Abulafia was one of the first people to build a home on land close to the port of Jaffa purchased by a society called Ahuzat Bayit.

On 11 April 1909, 66 Jewish families gathered on a desolate sand dune to parcel out the land by lottery. White and grey shells were collected. Each member's name was written on the white shells and the plot numbers on the grey shells. A boy drew the names from one box of shells and a girl drew the plot numbers from the second box. This event is considered to be the birth of the city of Tel Aviv.

Whilst Shlomo Abulafia is regarded as one of the city's founders, another Abulafia, Said, of Arab descent, began to make his mark even earlier, when in 1879 he established the now famed iconic bakery in Jaffa, which his descendants have continued to run for 140 years. His great grandson, also named Said, lives in Jaffa, a city he is proud of as truly multicultural. The touching story related below concerns his grandfather and illustrates this aspect of life there.

In the 1970's Rabbi Shlomo Zalman owned a shoe factory next to the bakery. During the Jewish holiday of Passover, it is forbidden for Jews to eat bread, so all Jewish bakeries close. However Abulafia's, as an Arab run business, remained open, much to the distress of the Rabbi who saw many non religious Jews queuing there to buy bread.

The Rabbi approached the bakery's owner, Said, asking him how much profit he made during the week of Passover. It was a substantial amount, but the Rabbi offered to pay him this money if he would close during Passover. Said consented.

For the next five years the agreement continued, but on the sixth year Said visited Rabbi Zalman a week before Passover. "My family" he said, "has made so much profit during the past five years thanks to the blessings from Allah because of our merit in closing during Passover, that we do not want to accept your money any longer".

The agreement was terminated, with Said promising to continue to keep the bakery closed during Passover. So it continues to this day. See the photograph of the grandsons of the two parties to the contract holding the original agreement.

This old-style bakery operates for 24 hours a day, using huge brick ovens to produce an amazing range of delicious products. One recommended specialty is a folded pastry called sambusak, filled with silky smooth mashed potatoes, onions, mushrooms and cheese. It is served hot with the addition of a hard-boiled egg and lots of black pepper. The desserts on offer can only be described as yummy! 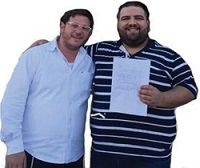 Today the original owner's great-grandson, Said, combines his work as a lawyer with running the family's real estate and a new branch of Abulafia in the Tel Aviv port. In 2007, being passionate about American football, he acted as President of the Tel Aviv Sabres – the local football team. It was unique in its composition of Muslim and Christian Arabs, local Jews, non Jewish Americans and even a Filipino Israeli. The players, despite being from varied backgrounds, all worked together towards the same goals – literally.

What Said has achieved represents the ethos of this melting pot called Jaffa. It is another example, of which there are many in Israel, of how people from different traditions, contrary to popular belief, can successfully work and play together, much as they might have done so many generations ago in Al Andalus, Spain. Viva the Convivenzia.