Nostalgia Express From the 1940s 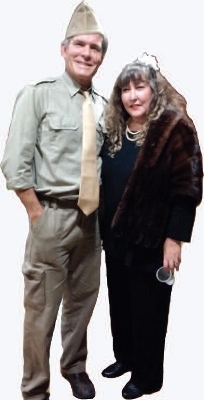 In mid-March, ESRA Rehovot members and friends took a nostalgic trip back in time to the early 1940s. The audience found the two-person show down memory lane, starring Daniella Roman and Grant Crankshaw, an absolute delight. Grant played Archie, the host of a World War II British army radio show; Daniella was Donna, the guest star on the program, and we were the live studio audience.

Songs from the era, among them: This Is the Army, Mr. Jones, As Time Goes By, P.S. I Love You and We'll Meet Again, were interspersed with humorous skits. We were invited to sing along, and many of us did. Grant, as Archie, tall, erect and proper in his khaki uniform, was the arch-typical British serviceman. Daniella's magnificent voice and powerful renditions enhanced the timelessness of the songs. Also included were a number of commercials from that era, funny in retrospect. Do you remember the one where thousands of doctors recommend smoking Camel cigarettes? I do.

My husband, Ira, and I got to speak to Grant, Daniella and Daniel, the sound man, as they were setting up. Daniel did an excellent job, but what else would you expect from someone who hails from Hollywood? All three were very personable, answered our questions and told us a little about themselves.

Daniella and Grant met in drama school in South Africa, and became engaged when they completed their studies. They were married after that, and made aliyah nineteen years ago. Together, they wrote and produced "Sentimental Journey," and another show, "Broadway Babes," which has been performed in several locations in Israel. They are the founders of Desert Rose Productions, whose aim is to bring English-language musical and drama productions to the Israeli English-speaking public.

Thanks to the generosity of the municipality, the show was held in our new venue, Malia Hall, in the Rehovot Municipality building. The spacious room allows us to accommodate more people than we can accomodate in the homes of members, where most of our events were previously held.

One of our ESRA members remarked to me after the show, "Why can't we have them here every month?" I, for one, wouldn't object.