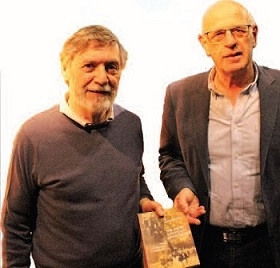 The Jewish Experience in Scotland is a new history of the Jews in Scotland based on the first-ever demographic and genealogical study of a national Jewish community. Sponsored by the International Institute for Jewish Genealogy in Jerusalem and some Jewish organizations in Scotland, including the Scottish Jewish Archives Center, it uses newly obtained data, obtained by Glaswegian Michael Tobias, Vice President Programming at JewishGen, to show how the various communities around the country were formed.

When the mass Eastern European migrations were under way around the turn of the 20th century, Scotland's Jewish community was growing at a rapid rate – but at the same time there was a large turnover as most people present in Scotland at one census were no longer in the country at the next census ten years later.

The detailed information from Scottish records from the middle of the 19th century to the present, plus newly digitized Scottish newspaper and court records, bring a new and clearer picture of Scottish Jewry. In some ways this challenges previously held perceptions of Scottish Jewish history, revealing the migrant and transitory nature of the Jewish population. It illustrates the growth in the 19th century and early 20th century followed by an eventual decrease in recent decades. At the same time, it has been possible to identify the emerging leadership of the various communal, religious, business and cultural bodies and to produce accurate data on occupations.

In the early years, many of the Jews were described as merchants or agents, dealing in goods such as clothing, furs and jewelry. Later, there was ready employment for Jews in tailoring and furniture-making. For a short time, many of Glasgow's Jews were in occupations associated with the thriving tobacco industry, while hawking and peddling goods around mining communities became a common form of activity from 1881 onwards, as immigrants were laying the ground for setting up in business.

The online searches of Scottish Court Cases have revealed the presence of a previously unknown group of Jewish artisans residing in Edinburgh during the 1780s, one of whom was able to act as a shochet, after training in London. Other digitized press newspapers have clarified the year 1817 as the date for the formation of the Edinburgh Hebrew Congregation, Scotland's first synagogue and its first official Jewish body.

Using this demographic data, the book charts the growth of the Jewish community in Scotland through the 19th century, with the bulk of immigration coming from Eastern Europe in the last quarter of the century. It shows, using figures for births and deaths, that subsequent population growth was largely a function of natural increase. Thus, a relatively young Jewish population with a comparatively high birth rate and low death rate ensured that natural growth would more than compensate for an almost complete halt in immigration with the outbreak of World War I.

The book tells the story of the small communities in the towns of Falkirk, Dunfermline, Greenock and Inverness when there were often as few as thirty Jews, or about a dozen families. They would often employ a minister, a religious functionary not always possessing semicha (rabbinical ordination), who would act also as shochet and cheder (religious school) teacher to educate the community's young.

In many communities, synagogues were regularly in existence for a number of years before public exposure, often due to concerns over possible expressions of prejudice in the wider population. Most of these regional communities experienced a major numerical decline in the period after the World War II and of the seven smaller communities, only those in Aberdeen and Dundee still exist today.

Most had welfare societies, providing support for their poorest members. Many also had educational, social, cultural and political groups. In Edinburgh, the multiple activities of these groups were organized through the synagogue. In Glasgow, with its greater size and resources, many of these bodies had independent identities. Thus, the Jewish Board of Guardians, Talmud Torah, the Jewish Old Age Home, the Maccabi sports club, the Glasgow Zionist Organization and Youth Movements, such as Habonim and Bnei Akiva, had their own premises. Women's societies were active in raising funds for worthy Jewish charities and encouraging the participation of women in communal activity.

A major part of the book looks at the integration of Jews into the fabric of Scottish society and the contribution which Scotland's Jews have made to its business, professional and cultural life. The department stores run by the Goldberg family showed considerable innovation in commercial enterprise and a leading figure in the whisky trade, Sir Maurice Bloch, was highly active in community organizations, local politics and philanthropy. One of the most prominent British Jewish entrepreneurs and a major philanthropist, Sir Isaac Wolfson, grew up in Glasgow and some of his benefactions reflect this early connection.

The transitory nature of many Jews in Scotland is reflected in a chapter on religious leadership. Glasgow and Edinburgh were home to many distinguished rabbis and cantors, over the years. Some major figures, like Rev. E P Phillips, Rev. Dr. I K Cosgrove and Rabbi Salis Daiches devoted decades to Scotland while more than a hundred others saw the country as a step on the way to career advancement.

The sons and daughters of immigrants arriving in the 1880s were the first to take advantage of the open nature of the Scottish education system, with many entering the medical profession producing such outstanding figures as Prof. Noah Morris and Prof. Sir Abraham Goldberg. Refugee psychiatrists and analysts who arrived from Germany and Austria during the 1930s made an acknowledged contribution to a previously underdeveloped speciality in Scotland. At one time, the Scottish High Court of Justice boasted several Jewish members, including Sir Gerald Gordon, a leading exponent of Scots law, and Lady Hazel Cosgrove, the first woman to serve as a High Court Judge.

The Scottish art scene was also enhanced by Jewish immigrants. Benno Schotz came to Glasgow from Estonia in 1912 and eventually became Professor of Sculpture at Glasgow's renowned Charles Rennie MacKintosh School of Art, and was appointed the Queen's 'Sculptor-in-Ordinary' in Scotland. Schotz nurtured the talent of refugee artists, like Yankel Adler and Josef Herman, who passed through Glasgow during the war years. 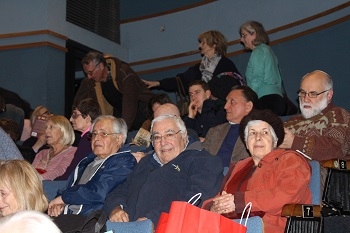 Turn up for the book ... some of the audience who attended the Tel Aviv launch

A fascinating chapter in the book comprises the memoirs, translated from the original Yiddish, of Elimelech Berislavsky who arrived in Glasgow in 1903 following a journey from the shtetl through Poland and Germany and across the North Sea to Glasgow via Grimsby. His story and attempts to find a place in his new country neatly encompass the story of many.

Over the last 20 years, numbers have been affected by increased social mobility, a gravitation of young people to London and the effects of modern lifestyles, including partnering and late marriage, plus a tendency to wed outside Scotland, all in keeping with trends in the wider society. The book shows how our understanding of the history and the social narrative of Scottish Jewry has been revised.

Following successful launch meetings in Glasgow, Edinburgh and Tel Aviv the book is now available for order at NIS60 (including postage and packing) from This email address is being protected from spambots. You need JavaScript enabled to view it..