My Well-Thumbed and Stained Machzor 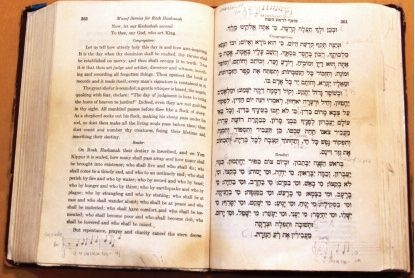 A companion through life ... the writer’s aged compendium of prayers

Those were days of awe. The shul in Cape Town, South Africa was packed to the brim with generations of families in their finery. The men, many topped with formal hats, wore dark suits and solid ties while the women, resplendent in variations of the season's fashionable colors, glittered with a sense of the occasion. The elders appeared stern-faced, some leaning on carved walking sticks while the little boys and girls, shoes unusually polished and ties slightly askew, strained on tiptoes to get a glimpse of the solemn rabbi and shul officials, sitting upright in their solid oak "boxes" on either side of the Holy Ark. Teenagers and adults carried machzors,* the "Adlers" bound in black, the "Birnbaums" in red, all looking in mint condition. After all, they were removed from the bookshelves for use just three days a year.

It was the first night of the High Holidays in 1968 and I was a 13 year-old high-pitched soprano choir boy. That evening represented the culmination of months of our preparation, learning, then honing the great pieces composed mainly in the 19th century for the imposing liturgy of the New Year festival. Just a month before, the shul president had presented me with a Birnbaum on the occasion of my barmitzvah and I held it with a reverence reserved only for the most holy of objects.

As evening fell, we were summoned to the bima and found our places around our rather flustered choir-master, who fidgeted nervously, anxiously wondering if we were all focused and in good voice. Our instruction was to watch him at all times, but I could not help staring at the grand cantor as he strode onto the podium to begin the service. Majestic in velvet white cloak and silk pom-pom hat, it seemed to us youngsters that his countenance was just like that of the Temple's High Priest and I struggled to take my eyes off him.

Then I looked down at the gold embroidered cloth covering the bima to peep at his machzor. Surely his would be a large, pristine, impressively bound volume, befitting his high station. But no, instead I was astonished to find a rather ancient, hand-sized edition seemingly fit only for the geniza.** The rough blue binding was almost detached and as he opened it I noticed that the worn, sepia tinted, well-thumbed pages were covered with scribbled markings and rough musical notes. Yet the cantor, whose tenor voice filled the large sanctuary, turned the brittle leaves with love and care, as if this humble book, with old-fashioned, fading print was a rare treasure. Too intimidated to ask, I could only wonder how long he had been using it and why he was not in possession of a machzor in keeping with his status and responsibility.

As I grew into adulthood, I began to serve communities as their shaliach tzibur special musical modes which serve as settings to the deep, moving liturgy and developed a personal set of markings as an aid to proper pronunciation and accenting, which I marked in my "Birnbaum". I collected and occasionally composed lyric melodies, traditional and modern, to compliment the nussach, sometimes three or four tunes for the same text. I penciled in musical notation for the opening phrases and developed a habit of including the composers' names, when known to me.

After a number of years, the pages began to yellow from the imprint of my fingers perspiring with the intensity of the physical and emotional effort entailed in reciting with meaning and feeling the hallowed words on behalf of the congregation. The binding began to disintegrate and some of the print became almost illegible. New publications, "Rinat Yisrael," "Art Scroll" and others offered a selection of beautiful, modern machzors which made the old "Birnbaum" look tattered, passé. Although daunting, I contemplated copying all of my notations to a new volume.

But how could I? I had developed a strange sentimentality towards what was an inanimate object, yet which contained so much value and meaning between its lines. This aged compendium of prayers, composed and collected through millennia, had become a part of my life, serving me faithfully in the moments of my deepest spirituality. It had travelled across oceans and continents with me, the one item I would always carry on the plane, not entrusting it to the baggage hold, for were it to get lost, I would be lost. It fit my hand like a glove, accompanying me not just three days a year but through months of preparation and nervous, excited anticipation. I would pull it from its prominent place on the bookshelf each time a friend or colleague asked for musical ideas for Melech Elyon or Ata Bechartanu and it had become the signal to my wife and daughters that the period of repentance was at hand when they encountered its familiar presence at strategic points around our home.

And so, 45 years later here I am with my beloved machzor. Growing old with me, it has become an almost organic companion, tracing paths of my life, telling stories of my experiences, echoing the sounds of synagogues on three continents. It holds the memory of my dear teachers and continues to be an inspiration and guide to God's gift of prayer. It is the source of so many of life's lessons and perspectives that linger through the year - "We are the dream that flies away and You are the King, the everlasting God" - and the most beautiful of prose - "I remember your youthful devotion, the love of your bridal days, how you followed me through the wilderness, through an unsown land."

Over the past few years, a group of young boys have joined me at the bima, singing melodies in the Mussaf service. Once again this year, on the night before Rosh Hashana we gathered around with our machzors to practice the repertoire. Just as we were about to commence, an 11 year-old looked down at my machzor with a quizzical expression, then back up at me and asked, "Chazzan Richard, why is your machzor so old and broken?". I expect that one day he will understand.

* Name of the prayer book used during the Jewish festivals. Amongst its other meanings, the word also means "cycle."