My Joy of Reading 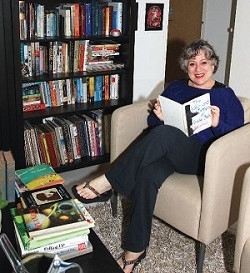 Long before I heard that Jews were the "chosen people" I knew that we were "The People of the Book". My parents spent a lot of time reading; my sister and I followed in their footsteps. We had many, many books, displayed like trophies in our home. Every room (except the bathrooms and kitchen) had shelves for books. One summer I did nothing except play one very long game of Monopoly with our neighbor Kerry and read Fifty Famous Fairy Tales over and over and over again. After that summer the book was ruined and "The Story of Cinderella" was torn to shreds.

The books of my childhood were some of my greatest gifts. Many of them now hold a place of honor in my apartment in Modiin. On my shelves are vintage (1930s) editions of Nancy Drew Mysteries, multiple copies of The Giving Tree and other Shel Silverstein classics, The World of Pooh (before Disney), the Planets book from the Golden Library of Knowledge ©1959. (When I was four years old, I refused to be in the same room as this book. It had a creepy picture of a horrible green monster living on planet Venus.) Also saved for posterity are my son's first book, written in fifth grade, a biography of Richard M. Nixon, The Life and Times of Tricky Dick (a true classic by anyone's standards), Love You Forever and my all-time favorite, Mrs. Coverlet's Magicians. There are treasured birthday gifts, books of poetry and a book of blessings inscribed by my religious school teacher (my late mom) as reward for my perfect attendance at kindergarten.

The characters of the books and the people who wrote them were my heroes. When I learned that my favorite "Donna Parker Mysteries" were written by my mother's cousin, Marcia Levin (writing as Marcia Martin), I convinced my parents to take a side-trip from New York to Philadelphia so I could meet her.

Once I grew up and had a family of my own, we had one rule about reading: my children were allowed to read any book or periodical that they wanted. [They were limited to time and content on movies and TV shows, but not reading.] I believe that children are smart enough to differentiate between what is garbage and what is valuable. Even salacious, violent or impertinent stories, when badly written, are boring. [As it is, my son and my daughter both graduated from high school and college with honors. My son is a writer. My daughter loves to read and study.]

One of the reasons I moved to Modiin when I made aliyah was I had seen on the Internet that I could work at a bookstore for English Speaking Residents (ESRA). I signed up and began volunteering at the bookshop even before I received my Teudat Zehut (a long story). The ESRA bookshop is better than I had envisioned and a treasure to behold. The books are ridiculously inexpensive. Families come in together and walk out with reading for everyone, from the three-month old to the great-grandparents. It's a good idea to come into the bookshop often, because you never know what's going to be there. The current bestsellers fly off the shelves shortly after they arrive. I've seen books that cost over a hundred shekels online that we sell almost new for NIS 15. Recently we received a gold-leaf classic that had never been opened.

After arriving and setting up for my shift, the first shelf I head to is non-fiction. I've always liked true stories best, especially biographies, memoirs and autobiographies. There are valuable lessons learned that I don't have to suffer through because someone else has already suffered for me – and had the courage to write about it. I find that the non-fiction books are often funnier, more absurd, higher drama and have deeper insight than fiction. To me this makes them more entertaining – which is the ONLY reason I read.

At first I was annoyed by the people who came into the bookshop and took 60-90 minutes to decide on the one book they would buy that week for NIS 5. Then I realized that the customers were enjoying the magic of the books; feeling the unlimited possibilities open to them. Now they're the customers I like the best; we discuss reading, authors, books, lessons learned and stories.

In Modiin I've joined my first book club. These ladies encourage me to read more fiction than I would choose. My horizons are widely opened and I get to hear what other people think about the story I just read. We've had many deep, entertaining, educational, enlightening, funny and valuable discussions.

When it comes to books and reading, Modiin is my dream come true.