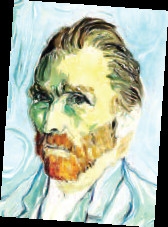 As a child of five, 75 years ago, I was always drawing. My uncle who was an artist encouraged me even though he suspected that I was tracing my pictures.

While looking through a comic magazine one day I saw an ad that promised a summer of art lessons to the child who could best copy a picture of a horse's head. I entered and I won. That summer I would take the train downtown to the Art Institute of Chicago. I arrived early so I could look around. I looked in at several galleries and then I found myself in the impressionist room. Wow. Here were some of the paintings I had only seen in books. I slowly took my time digesting the colors, light and brush strokes. Then as I moved from painting to painting I felt as though there were eyes following me. I looked around and saw that I was the only one in the gallery. Then as I took a second look I saw who it was. Across the room staring right at me was Mr. Van Gogh. I slowly walked up to him and said, "It is a real great pleasure to meet you." He smiled. Since he only spoke Dutch our conversation was brief but he could tell how I felt about his paintings. I put my fingers to my mouth, made a kissing sound, and blew him a kiss. After saying goodbye I went to my lesson.

After high school I attended the Art Institute for two years and every day I went to say hello to my friend Vincent.

My wife Eve and I traveled all over the United States and Europe visiting art museums and art shows. At many of them I was able to visit with my friend Vincent. I own several books of his paintings and cherish the one that contains his correspondence with his brother Theo, all translated into English. Oh, by the way, my wife's favorite artist was Marc Chagall but that's another story for another time.

Bob Adelman is a resident of the Lieberman Center in Chicago