Music as a Balm for Holocaust Survivors 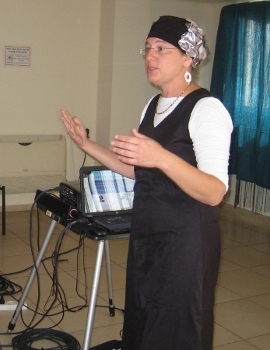 Story and Photos by Flori Cohen

Although a difficult subject some are still unable to face or to hear, it was another excellent ESRA Modiin morning tea event. Over 30 attendees heard an enlightening presentation by music therapist Atarah Fisher on music as a means of coping amongst Holocaust survivors. All proceeds went to the benefit of Neve ESRA, our afternoon care center for children at risk.

Atarah described the many horrors and cruelties Holocaust inmates were subjected to during their internment in Nazi concentration camps during WWII. Music became a means to relieve their torment and hardships, either physical or emotional, and provided support as an outlet for the expression of feelings.

She examined the effect music had on survivors and how it helped them to cope during the Holocaust. In this light she interviewed and researched several Holocaust survivors of different age groups with various musical backgrounds. They were all creative individuals - musicians, singers and artists. They described how the camp guards routinely ordered detainees to sing Nazi or German songs while marching, in order to humiliate the prisoners. If they did not know the songs or sang too softly, they were beaten. Another interesting factor was that when the inmates were not permitted to speak they found a way through their singing to pass on information to one another.

They described how the German Nazi guards forced them to perform for hours and to watch helplessly as friends, family members and fellow Jews were killed. The Nazis realized the advantage of music being played in order to deceive prisoners on their arrival in the camps who were then unsuspectingly sent on their way to the gas chambers. Often the guards would play loud music over the loudspeakers at night, which disturbed and deprived the prisoners of their sleep.

Musical groups of imprisoned professionals or amateurs were formed. 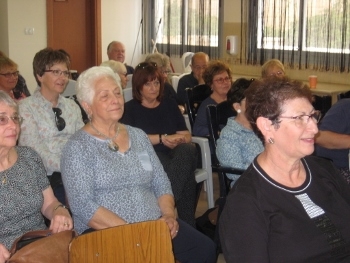 For anyone who entered Hitler's horror camps, survival was foremost on their minds, and these musicians literally played to stay alive. Survival by means of playing a musical instrument was one such way. Through their resilience and their music they managed somehow to briefly escape the horrors that surrounded them. However, this was very difficult for many of the musicians, and during their internment some either perished or committed suicide.

Atarah took into account the comments of the interviewees before, during and after the war. Each of them described their strong connection to music - not only to play but to dwell on the music, which became a means of retaining their sanity.

After the war the survivors defined how their music influenced their lives today. Music was a means by which they gained inner strength.

May the Jewish people be blessed and may they never again have to witness or be subjected to such horrors as those of the Holocaust.