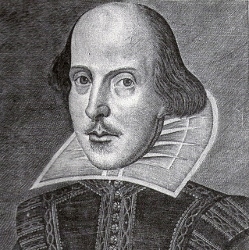 The polished willow branch in Mr. Shaabi's hand tapped out the rhythm while we chanted the words: Now – is – the - winter – of – our - dis – con – tent.

"No, no," he shouted in irritation. He buttoned and unbuttoned his jacket. "You say these words as if they have no meaning. This is Shakespeare, the greatest poet and playwright the world has known."

A hot wind, carrying the smell of gasoline and burnt rubber blew through the broken glass of the classroom window. My notebook pages fluttered. I laid a ruler across the two sheets of my English lesson to hold them down.

"Who was the greatest playwright, Mahdi?"

"One word, Mahdi, one word. This great Englishman's name is one word – Shakespeare. We will recite this famous speech again."

For thirty years Mr. Shaabi had been teaching English in the Saladdin Comprehensive School. My brother and my cousins had been his students. In all those years he never failed to appear, at eight o'clock in the morning, in his jacket and tie. "This is the way a teacher at Oxford greets his students," he would say, "proper dress shows respect."

Only on the Jewish holy Day of Atonement did he stay home. After the last war his wife took their two daughters and immigrated to Canada, wanting only peace and quiet. But Mr. Shaabi remained. He said nothing. Only Mr. Nurredin, the principal, received an explanation. "My family and ancestors have lived near the Euphrates for centuries, as far back as 597B.C. I will not dishonor my history by leaving this city or abandoning my students. Even if I have to live alone."

The words on my notebook page were black dots, meaningless. All I could think about was tonight. Tonight the bombs would fall again. The television and the radio said we were victorious but the foreign news announced: In twenty-four hours the foreign soldiers, the conquerors, would enter the city. If they come I will shout there is nothing for you on my street. Look, everything has tilted or fallen or crumbled or broken or shattered or burned or cracked or twisted or exploded.

I will say to the soldiers in the English Mr. Shaabi has taught me, please leave us alone. My father is an accountant, my mother does sewing at home, my brother is a university student, and I am at the Comprehensive School and my sister is a little girl of five. Only us, we are the only ones left. See, the building is empty. The other six families in our apartment house packed up what they could carry and left for villages outside the city.

But meanwhile here I was, many streets away, sitting in a classroom, listening to Mr. Shaabi drone on in his perfect English accent as if nothing was happening. By tomorrow I could be dead. And my parents, and my brother and my little sister, it was inevitable. Maybe it was even the will of Allah.

I looked up from the page, we all looked up. The willow branch in Mr. Shaabi's hand trembled. "None of you have time to get home safely. Take your things and follow me. Quickly."

I grabbed my schoolbag, my notebook, the ruler clattered to the floor. Out of habit we formed our single class line. We ran down the stone flight of stairs, following Mr. Shaabi. I heard screams and shouts from the other classrooms. Mr. Shaabi never turned around. We followed him out the back door and down the narrow street behind our school. I saw his tie fly out to the side like a black flag and his jacket flap against his legs. Where was he taking us? Where were we running to? The high pitch of the air raid siren continued.

I bumped against the other boys as I ran. I heard my breathing. My mouth was dry. I thought I would choke. Could the bombs fall here, could a pilot in the sky see me? I saw the sign on the corner – Rashid Street. We were in the old town. Mr. Shaabi stopped and turned around. "Are you all here?"

He pushed open a thick wooden door. "Hurry, everyone inside."

When he saw we had all entered, he led us down winding steps to a square whitewashed room. In the dim light I saw rows of benches, a pulpit, and two carved doors. The air raid siren was drowned out by the explosions of bombs, again and again and again. We had gotten to this place just in time.

I stood behind him. He did not turn to look at me.

He moved forward a few steps to the two carved doors. "Now is the –"

Oh no, I thought, he will begin to drone his Shakespeare again.

"– time for me to stand before your Holy Ark, Lord, the place of the Torah scrolls." His English words were slow and spaced as if he held the willow branch in his hand. "– to beg you, God, to protect these children of Ishmael, and me, a son of Abraham, all of us inhabitants of this ancient land. Amen."

He bowed and stepped away. He turned around and saw me. "Yes, Mahdi?"

What could I say? Should I recite a Shakespeare line that he had taught us?