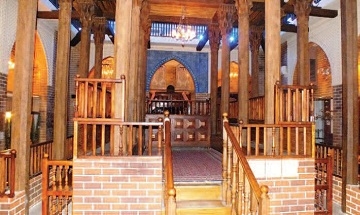 A synagogue in the Babylonian Heritage Center in Or Yehuda. Photo: Ayelet Shemesh

The Rehovot ESRA branch had an outing to the Babylonian Jewry Heritage Center in Or Yehuda. The museum was much more exciting than I had expected. It is an architecturally-interesting two-story building in a small park, with an arched entrance and two latticed wooden balconies on either side, evoking Moorish buildings.

The idea for the museum in Or Yehuda originated at the end of the 1960s, supported by the large proportion of the population who originated in Iraq. Foremost among them was the mayor Mordechai Ben Porat, who was instrumental in the airlift from Iraq (1951-52). The cornerstone was laid in 1973 and the museum opened in 1988.

To begin our visit we were offered drinks and three types of pastry, sweet, savory and salty, to help us recover from our arduous 40-minute trip from Rehovot. Our guide, Michal, ushered us into the first room where we were comfortably seated. She proceeded to tell us about the 2,500-year history of Babylonian Jewry, from the time of the Babylonian captivity in 586 BC to 1951 and 1952 AD when Operation Ezra and Nehemiah airlifted the Jewish community to Israel. She was aided in her story by the exhibits in the room, including an animated film giving a condensed history of the fall of the First Temple and the decision of many of the exiles not to return to the Land of Israel 70 years later. What caught my eye was a replica of a stone tablet excavated near the Ishtar gate in Babylon. Written in cuneiform, it mentions Jehoiakim, the deposed and exiled king of Judah, and his five sons, as recipients of food rations from the king.

The exterior of the Heritage Center has a Moorish influence Photo: Yehuda Katz

The exiles who did not return when allowed to do so by the Persian King Cyrus went on to become the focus of Judaism in Babylon for more than a thousand years. This was the place where Jews would acclimatize themselves as a people without a land. After the destruction of the Second Temple in Jerusalem, there was a wide dispersion of Jews, many of whom ended up in Babylonia, joining the resident community. Two famous yeshivas were founded, and the period became known as the Period of the Gaonim, which lasted until the invasion by the Mongols in 1258. The key work of these yeshivas was the compilation of the Babylonian Talmud, completed around the year 520 AD. The three centuries in the course of which the Babylonian Talmud was developed were followed by five centuries during which it was intensely preserved, studied, expounded in the schools, and recognized by the entire diaspora. Michal told us about letters from communities in Europe and elsewhere asking for help in matters of Jewish law and ritual.

After this history lesson we toured the other rooms on the first floor of the museum. Referring to the exhibits, Michal explained the rituals and dress of the Jewish community and how they changed in the 19th century, establishing modern schools for both boys and girls. The Iraqi Jewish community formed a homogenous group, maintaining a communal identity, culture, and Jewish traditions. They spoke an old Arabic dialect, Judeo-Arabic.

A market scene in the Heritage Center. Photo: Susan Lurie

There is a reconstruction of a market area from Baghdad with a tea house and artisans' shops. A narrow lane leads to a room with a reconstruction of the Bimah from the first and oldest Jewish synagogue in Baghdad. This was reputably built in Babylon by the exiled King Jehoiakim; it was known as The Great Synagogue of Baghdad, or "Shaf ve'Yativ Synagogue", translated as "the Divine Presence was removed and settled in this place". This was meant to show the exiled Jews that God would be with them, even if they were not in Jerusalem, and contained Torah scrolls encrusted with gold and silver. The Great Synagogue was destroyed after the Jews emigrated to Israel.

The second floor of the museum continued the history of the Jews in Iraq, and showed their reception and absorption into Israel. It has a reconstruction of a ma'abarah tent and the notices of efforts to find work in the new land. There were many pictures following several families as they arrived, were sent to the ma'abarot and then were able to move out into apartments. There was also an interesting exhibit of pictures of women paired with quotes from a book about how women were to conduct themselves.

At the end of a two-hour tour we felt a new appreciation of the culture and achievements of the Babylonian Jews. This is a gem of a museum and well worth visiting. It is open daily, but the best way to experience it is with a guided tour as we did. Their web site is www.bjhcenglish.com.