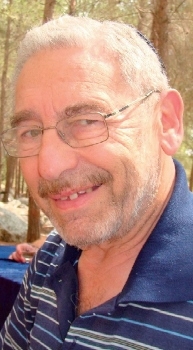 Mike Finestone . . . or Mike the Finest One, as he liked to call himself.

He was 9 years old when WW2 broke out. Although he and his family lived near the coast, they didn't experience any bombing and so lived through the war without too much hardship. Because of the shortage of men, he learnt to drive a tractor, and by the age of 13 could be seen working in the fields.

He was in the Habonim youth movement for several years as a kid, then as a youth counselor and was known to be one of the leading maintenance guys at the camps. He did hachshara (communal farm training) in Holland.

After the war, Mike went to study chemistry. His National Service was therefore postponed for two years. He then served in the Royal Air Force.

When he first left home, his mother gave him a pen and asked him to write to her once a week - even if only a postcard with a signature - just so she'd know he was OK. He kept up this habit every single Sunday until she died 30 years later. I can still remember him typing away on the old typewriter.

Later on, Mike went to university in Manchester to study opthalmology. It was there that he met Anne Copeland and within two and a half weeks, they decided to get married.

We lived in Salford, where Mike had his optician's practice, and we spent our holidays on long treks round the Lake District. I remember one time walking in muddy Wellington boots and being quizzed by him about the 6-times table. Apparently, I couldn't go back to school if I didn't know it!

Mike was a great stickler for detail, a fact that contributed to his work, both as an optician and later as a translator. He would spend hours finding the right word for a translation and there was nothing he liked more than finding grammatical, spelling or any other mistakes and pointing them out.

When they got married, Anne and Mike planned to go on aliyah, and they finally got around to it in 1970. We started out at WUJS in Arad, then made a home in Givatayim, Tel Aviv, and finally in Raanana.

In 1999 Anne died, and in 2003 we had the good fortune of Mike getting together with Judy Usiskin.

Judy writes:"My memories of him go back to our student days when he was an earnest young student of optics in 'Tech. Anne, and I were at the university, supposedly studying hard but actually discussing politics and the latest fashion, and gossiping over innumerable cups of coffee in the university union (in those far-off days there were separate unions for men and women) while he slaved away over improbably small pieces of equipment.

I was friendlier with Anne than with Mike, although we were in the same circle of aspiring Zionist pioneers. I registered him as a quiet but friendly guy with a cheeky smile who had a penchant for long telephone calls and needed a supply of friends to practice eye-testing on.

Mainly due to Anne's efforts, we kept vaguely in touch over the years, either in London or in Tel Aviv, and when I heard of Anne's sad and untimely death, I wrote to Mike and the family.

Some years later, after the death of my husband Ronnie, while I was catching up with old friends in Israel, Mike and I talked on a more serious note than we used to and arranged to meet again. Then he visited me in London.

Gradually, we grew closer so that it seemed sad to part each time. With very little confusion and the support of our six children, we agreed to split the year between London and Raanana, and it worked pretty well. Mike really enjoyed the time in London, catching up with old friends and concerts, museums and theaters, as well as trips to the continent and even to Australia. And in Raanana he loved to walk down the streets, cheerily greeting all his acquaintances and being hailed warmly by them . For my part, I was able to realize my dream of participating fully in the life of Israel, which I had loved and visited so often with my family over the years.

We often spoke of how lucky we were with our lovely families and really good friends in both countries.

Mike loved life. He loved food of any kind (he'd eat anything put in front of him, and pronounce it delicious, as long as it wasn't marmalade, and had enough gravy on it).

He had a great love of classical music and had an enormous collection of records, then cassettes, and later DVDs. He also enjoyed singing in a choir both in Raanana and in London. His hobby was wine-making, which seemed to annoy both wives for some reason…

He had an enormous interest in and knowledge of the world and would spend hours explaining things to his 11 grandchildren. He took each one of them in turn for a day to the science museum.

Dvora, his granddaughter writes: "It was important to him to develop our curiosity and knowledge. He would call me to show me things. He taught me about animals and that an apple is biologically like a rose, about ants, how the world goes round, how to do long- division, how the light-rays refract and turn into a rainbow. He was my basis for so many things. He tried to transfer to me his love of culture; he took me to the theater, played classical music to me, spoke about different composers, and promised me he would take me to the opera."

Mike was a gentleman - he never lectured, but taught us and the kids by his example. I remember fights between my parents over the washing up - never "it's your turn", but rather "I'll do it! No! I'll do it!"

At meals he would never start eating before the person who was serving had picked up a knife and fork, and after the meal he would never sit down until all the meal was cleared away - including sweeping the floor.

He was caring and attentive to others. Over the years he helped out numerous friends and relatives. When we read his will, over half of it expressed how he wanted us to look after his sister Jan, who lives by herself in St. Anne's, and whose rented flat he had bought a few years back to make sure she had a place of her own to live in.

Family was very important to him. He would go out of his way to visit various relatives. After Mummy died he kept in touch with her side of the family, often dropping in without notice, just to say hello. Some time back we were talking about old graves, and I said to him: "Well, who ever goes to see Grandma's (my mum's mum) grave?" And he answered, "I do, I was there last time I was in Manchester!"

Jeremy (Mike's nephew) writes: "Mike volunteered in various organizations over the years. He worked in a hospital pushing patients' beds and wheelchairs around; he volunteered in the civil guard and for some years as a 'shlepper' in the ESRA shop in Raanana. His experiences there can be read in an article he wrote in memory of Motti Weiner in the ESRAmagazine www.esramagazine.com/blog/post/motti-revisited."

Mike's niece Judith writes: " Mum decided I should get my eyes tested. Mike prescribed some very mild reading glasses and said, after using one of his instruments to look at my retinas, 'Ah, I see you had cheese for lunch' - which was true, but I could not understand how it would show on the retina.
Years and years passed. Eventually I asked him and he admitted that he had known because he had smelt it on my breath. When he examined schoolchildren, he would find out from the school or teacher what had been the menu for school dinner - and would then tell them he could see it in their eyes!"

He definitely had a sense of humor and things were dire indeed if he couldn't find something to laugh about.

Jeremy (Mike's nephew) writes: "It was the last day of the shiva for Anne and there were a few hours before my flight home, so Mike drove me around places of interest.
We stopped for coffee and he started talking about Anne. 'One time I rebelled,' he said.
'What?' I said, 'Did you think about leaving her?' 'Noooo. I contradicted her.'"

Daniel (Mike's step -grandson): "He was a great guy and someone whom I grew very fond of. He was always very kind to me. I particularly remember him helping me for my barmitzvah... I thoroughly enjoyed my time with Mike last year...We had great talks about all sorts of things and we really connected. We both shared a love of cheese, he introduced me to candied ginger (it grew on me) and I introduced him to the American version of the sitcom, The Office (it grew on him)."

So good choice, Grandma, he was a nice addition to the family and he will be missed. I will particularly miss his sly inputs of humor around the table. Of course some went straight over everyone's head, but he was a comedy maverick ahead of his time. I also appreciated his ability to fall asleep at the table. I never took offence. I just thought fair play, the man knows what he wants."

Mike was very philosophical about his own mortality. He spoke of it often, and always kept us updated with his latest will. He frightened numerous guests by keeping a file titled "ON MY DEATH" prominently on his desk in his study, the guest-room. We used to joke about it. Of course when he actually did die, we couldn't find it.

Mike died on his 83rd birthday. He is sorely missed.