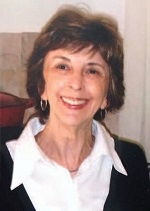 Almost 49 years ago, we had the good fortune to meet as new immigrants at the absorption center in Netanya – Ulpan Ben Yehuda – and become the very best of friends.

Merle née Uran was born in Johannesburg on September 25, 1944. Her love for Israel started as a counselor in Habonim, and continued when she came on Machon leMadrichei Chutz la'Aretz - the Institute for Overseas Youth Leaders - in 1962. This was the catalyst for Merle and her husband Harold coming on aliyah.

Merle and Harold were from South Africa and Jack and I from Australia, so it took a while for me to learn that "just now" did not mean right now or very soon, but rather in the near future.

"The better part of one's life consists of his friendships." In all ways Merle was a most important and integral part of the lives of my whole family.

Nearly two years ago, Merle was diagnosed with Multi System Atrophy MSA Type C. In spite of the pain she suffered in her last months in particular, and although subconsciously we knew that her passing was imminent, the thought of life without Merle was unbearable. It was so hard for us "TO LET GO".

My three daughters were overly concerned with my well being, because they knew that they were sharing me with Merle, especially during her illness. My daughter-in-law in Toronto wrote to me:

"I remember Merle as a beautiful able-bodied person and that's how my memory will stay."

…and that is how it must be.

We will remember Merle the dignified, the oh so well mannered, full of life, rushing off to folk dancing and bird watching, baking and cooking, attending cricket and tennis matches with Harold, and soccer and judo competitions with her children and grandchildren. We will remember Merle the homemaker, forever at the beck and call of her children and beloved grandchildren, juggling her time while working in a very high powered position in a commodities firm.

We will remember Merle who volunteered at the Tel Hashomer hospice, Merle who was accepting of everyone no matter what their color, creed, social or political beliefs. Never judgmental, "live and let live" was her motto.

Merle who knew only to give and not take; Merle who was the best listener, who always had a smart solution for the most complicated issues. All who had the good fortune to be in her company, to seek advice or receive tuition, profited. They profited from her wisdom, her patience and her insight on every topic. Harold claims that the secret of his business success was Merle's mentoring. Their amazing marriage was filled with love, friendship, respect and trust.

On retirement from her regular professional life, Merle reached a crossroad and was looking for a new position that would be both beneficial to her and to others. She had been coping in her own special way with Crohn's disease when she discovered "Breema", which upgraded her ability and instincts, pushing her thinking to greater heights. One of the main principles is "full participation": "The most natural way of moving and living is with full participation. Full participation is possible when body, mind, and feelings are united in a common aim."

She practiced and taught Breema all over Israel. We will remember Merle's frequent flights alone to so many Breema intensive workshops in America and Austria, until she succeeded to organize such workshops in Israel and bring international participants from all over the world. Without a doubt, it is Merle who put Breema on the map in Israel.

We will remember Merle who was always dressed "tip top", perfectly groomed (towards the end with the assistance of her personal hairdresser) - until her last day.

Merle, Harold, Jack and I spent so much time together – numerous movies, theater, playing bridge and touring Israel and abroad.

As for the friendship between the two of us, we could have gone into the Guinness Book of Records: never have two friends had so many telephone conversations or drunk so many cups of tea together. How can I not mention the Opera: twenty years, five operas every year in the best seats in the hall. How painful it is for me to cancel Merle's subscription and attend alone.

Merle had a wonderful relationship with Harold's sisters, Luba Zuk and Irene Segal, and brother Les and their families. There are no words to describe the sibling love between her sister Dolores Essakow and brother Steve Uran. It is doubtful that Merle would have coped during the last years without the devoted and dedicated assistance of Dolores, and the innumerable conversations on Skype with Steve in Paris were always so important to Merle, especially in her last months.

All families and friends could learn from the legacy that Merle has left. The importance of family, and priority to her children and grandchildren was foremost to her. The love, comfort and attention that Harold is now getting from his family are proof of that legacy.

The saying goes: "Friends are God's way of taking care of us." How correct that is – Merle took care of all of us.

She will be so sadly missed by all of her family and friends. Her memory is woven in to the fabric of the lives of so many people.