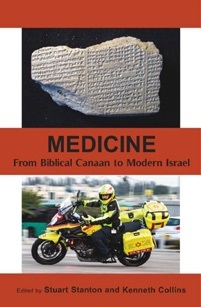 Newly released, Medicine: From Biblical Canaan to Modern Israel, tells the story of medicine in the Land of Israel from Biblical times to the present. Theodore M. Brown, Emeritus Professor of History and Public Health Sciences, at the University of Rochester, NY. Rochester, New York, described this collaborative volume as presenting "a panoramic yet rich and detailed account of, as its title states, Medicine: From Biblical Canaan to Modern Israel".
Its editors, Stuart Stanton, a retired professor of obstetrics and gynaecology from London, and Kenneth Collins, a retired general practitioner from Glasgow and currently Visiting Professor in the History of Medicine at the Hebrew University of Jerusalem, have enlisted some of the leading figures in medical history and contemporary Israeli medicine to tell a remarkable story.

The earliest chapters take us from Babylonian cuneiform medical records and their influence on the Talmud, through the Biblical and Talmudic periods. Professor Mark Geller from the Jewish Studies Department at University College London shows how the Babylonian Talmud relies heavily on local therapies, recorded in cuneiform. Indeed, a full set of Babylonian medicines can be found in Tractate Gittin of the Babylonian Talmud. Further chapters in this section describe medicine and surgery in the Bible, Mishna and Talmud, describing how injuries were sustained and treated and some of the medicaments that were current in the era. This account is supplemented by Professor Aref Abu-Rabia of Ben Gurion University of the Negev who provides the background of Islamic folk medicine, still a powerful influence today. This may include the use of various herbs, prayers and various forms of amulets. He also describes some of the key figures who practiced medicine in the mediaeval Islamic world. Here we encounter Jewish practitioners, such as Moses Maimonides in Cairo (Fostat) and Isaac Israeli in Kairouan (Tunisia) as well as famous Arab physicians such as Ibn Sina (Avicenna).

The chapter on Military Medicine covers the story of soldiers and civilians in war from earliest times to the present. In the era of the Crusaders, a military hospital was established and by the time of Napoleon's campaigns at Jaffa and Acre, the health and welfare of the troops was a major concern. Injured French troops were treated at mobile surgical units but the spread of bubonic plague wreaked havoc and brought the French campaign to an end. Allenby's Palestine Campaign in 1917 saw the first serious attempt by a military leader to care for the health needs for his soldiers and the chapter also details the medical innovations from Israel's wars.

Further chapters look at medicine during the Ottoman period showing that though poverty and disease were rife, the Imperial Government did have a strategy for dealing with hygiene and the inevitable epidemics. The story moves on to the British Mandate which saw major new developments in the provision of health services within the Jewish population, spearheaded by the Zionist movement and the incoming support from Jewish communities abroad.

Finally, the book considers medical care in contemporary Israel. This includes chapters on the delivery of health care and its parameters, emergency medicine and key ethical issues which have impacted on medicine. In addition, there are chapters on the growing interest in complementary medicine in Israel and rehabilitation medicine, for Israel's chronic sick and disabled. The book concludes with a chapter on Medicine in Israel Today, highlighting the research and innovation for which Israel is known internationally. New therapies, diagnostic procedures and innovative medical technologies are described, and the book ends with two iconic images: firstly, Prince Charles being presented with a 3D printed heart by Professor Tal Dvir at the British Ambassador's home in Ramat Gan, and next the Israel postage stamp to honor medical clowning, which has become a paramedical practice shown to reduce patient stress, loneliness and fear, leading to an easing of pressure for medications and nursing time.

Described by Lord Leslie Turnberg, former President of the Royal College of Physicians, as a 'feast of information', this book will appeal to all those interested in the history of medicine from the Biblical era to modern times, and also those who wish to see how important aspects of medicine are provided in today's Israel.