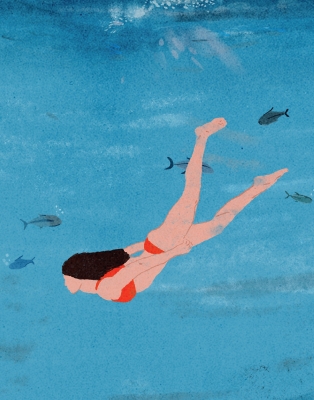 The Water That Brings Me to Life

I'm driving down the mountain from Zichron Yaakov to the coastal road, past the town of Furadeis, where an orange blow-up-doll beckons me to buy knafeh. On my way to swim my sacred laps, I don't have an appetite for the sweet dessert topped with pistachio, so I keep driving towards the beach.

I guess I'm what you'd call a swimming addict as I hardly ever miss a day – rain or shine. I even drove through the Arab settlement during operation Guardian of the Walls, despite the road littered with rocks and burnt tires from the previous night's riots; violence that could have resumed at any given moment. Swimming didn't even cease during lockdown as I left the 500 meter imposed limit to buy the superior granola sold in the Nahsholim Kibbutz bakery situated steps from the sea. Once I was there, well, how not to dip in? The scene that greeted me at the beach was a flashback to Woodstock, with kibbutznikim hanging out on the sands, listening to music, their naked children prancing around them. The festive atmosphere made me feel for the families imprisoned in compact apartments all over the country.

The Hebrew word Nahsholim ‎translates as tidal waves - not a very good omen for me since from a child I have had reoccurring nightmares of mammoth waves rising up in the distance, gobbling up the beach and myself with it. But I wasn't going to let that put me off. After all, before I moved up north, I was about to relocate to one of Greece's Cycladic Islands that according to mythology were created out of anger (when Cyclades nymphs provoked Poseidon's rage, the God of the Sea threw them into the ocean, transforming them into rocks).

Nahsholim cove is not only my swimming venue, but where I take my daily constitutional. Up a sand dune I go. It leads to a pathway from which I gaze out at the stunning view of what used to be the maritime capital of the Carmel Coast. A plaque on the walkway informs me that the area is famous for its indigo dye known as Argaman, extracted from mollusks. It was used for royal attire and woven into the Parochet curtain that covered the ark in our Holy Temple.

Past the Blue Grotto, Lover's Beach and St. Tropez (pronounced with the Z!), fisherman straddling the rocks below, I admire the rush of wild flowers that spread a purple and yellow haze over the rolling hills. The sense of expansiveness I feel is exhilarating. It's as if I'm stationed at the top of the world.

My morning walks in Jerusalem took place on The Mesillah that runs between the Baka and Talpiot neighborhoods. When I would reach the Pierre Koenig thoroughfare with its heavy traffic and polluting exhaust fumes, I used to turn around and retrace my steps home. Now, when I complete my five-circles-around-the-beach walk, bare feet kicking at the waves, the spray of seafoam refreshing me, I say Pierre Koenig – time to turn around, and give thanks for the silence and pristine air.

There are days when the waves are just too high to enter the sea – I am already prepared for the disappointment, as the minute I rise I reach for my iPhone and open the app that projects a live stream of the cove. I don't pay too much attention to the numbers: knots; temperature; humidity; wind direction, instead I study the picture and gauge from the amount of froth visible if I will be able to brave it. Most days I can, but when the image of a flat sea flickers onto the screen, I jump in the car, and off I go.

The clique of surfers that lounge around the surf club have encouraged me to acquire a wetsuit to protect against the cold. Sdot Yam is only a ten-minute drive away – and it wasn't hard to find the wooden hangar on the beach selling surf boards and diving accessories. The super-cool sales guy (dreadlocks) helped me squeeze into a miniscule suit, explaining that the tighter the fit, the warmer the swim. I could hardly breathe as I checked out my girdled silhouette in the changing room mirror. When I tried to circle my arms, my movement was restricted. I was assured that once in the water all would be fine. The very next day, with a little help from my beach-bum friends, I was all zipped up, and soon acclimatized to the constricting suit.

Today, my walk completed, I now easily clamber into my gear and make for the water. As I immerse myself, all worrisome thoughts leave my mind and I feel cleansed as if I had dunked in the purifying mikveh waters.

I stretch out into the infinite blue and remember my Jerusalem life, swimming at the King David Pool and bumping into the late Adin Steinsalz every Saturday morning on my walk home from the hotel. When the Torah giant stopped to greet me on his way to the Kotel, feeling the need to excuse my Sabbath sport, I explained that for me swimming is prayer - the water that holds me like a fetus facilitates a rebirthing and reconnection to God. The Rav, in his wisdom, reminded me that Torah itself is compared to water and is called mayim chaim. Just as water nourishes the soil, Torah nourishes the soul.

And so it is today swimming in the sea: its bed rich with fish and algae below, floating clouds above, and I boundless and boundary-less drift in what feels like another dimension, gazing towards the heavens, connecting to the beauty of this world.