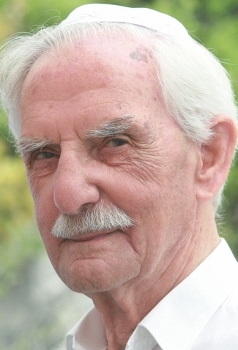 Lou was proud of the fact that he was born in Shaftesbury Avenue, London after his parents had fled from the pogroms of Poland. The family then settled in Sheffield where he grew up and trained as a teacher, interrupted by WWII when he served in the RAF mostly in India. In December 1940 on the night of the German Blitz in Manchester he married Evelyn Britstone.

His early years in London's theater district must have had an effect, as his hobby was acting, and he appeared in many Sheffield Maccabi and Rep plays.

When his daughter Linda (Frankie) was 10 they moved to Southport where Lou was active in the synagogue community and in AJEX, organizing the Christmas rota for the local hospital and nursing home staff. They came to live in Israel in 1991 to be nearer to Linda, Mike and their their children.

In Netanya he kept busy solving crosswords and playing bridge, and was one of the devoted team packing and distributing ESRAmagazines. In 1999 as Evelyn's health worsened they moved to Ahuzat Bayit retirement home in Raanana where he soon became a beloved personality, organized the English Club, was chief speaker on formal occasions, and a popular raconteur.

His youngest grandson, Gidi Cronin made the following eulogy at Lou's funeral:

I don't think he planned it but that's how it was.

Firstly, at a very young age he trained me for fast reaction times - me trying to touch his nose (and what a nose) and to remove my finger in time before I got bitten.

Then, on his visits to Israel I used to use the floor in their rental apartment as a platform for building mini race tracks.

Finally, my first motorsport activity of riding a motorcycle at the age of six. Not so much because it was a real motorcycle with an engine, but because I remember as a kid thinking that it's not possible to ride a real motorbike. And Grandad made this "impossible thing" possible simply by asking if I wanted a go. It was that simple. And so I learnt that nothing is impossible!

About seven years ago I had a talk with Grandad about death, at the time when Grandma was in her last months. Little did we know that Grandad himself would be so close to death just a few months later while going through open heart surgery. Amazingly the doctors agreed to operate on a 92 year old but they warned Lou that he may not survive the op. And then two weeks after the operation when Grandad was walking around the ward we laughed together at the nice extension period God was so kind to grant us.

After his operation we spoke on the death subject quite often. Not in a sad way, in a happy way, in an understanding way, in a "so what if the doc says I shouldn't drink whiskey" way. So we laughed at the "no whiskey" rule and threw back our heads with another cup of his favorite Glenfiddich.

And we laughed at the fact that he was about to go blind in his left eye. And God heard our laughter and smiled.

We laughed harder at the fact that when the cataract operation on his left eye was successful he realized that he was actually going blind in his right eye. God must have smiled at this as well.

Because Grandad had another cataract operation and it turned out he wasn't going blind at all.

We laughed at other things as well but I won't go in to too many details as they are mostly about different body parts wanting to jump out of his body and leave before Grandad agreed that they could go.

We talked about the fact that, at the time, I was not yet married and that I wanted him to be around to see my kids, he said that it's OK, when the time is right the time is right. Saying I should enjoy life as much as I can (and went on talking about the dollybirds we were watching in the park). I didn't expect him to learn how to use a computer, nor understand the Internet, nor how to use Skype. And the type of emails I received from him I expected from the guys at work not from a 95 year old!

Then, when I took my future wife to meet him, she had expected an old man. She found a bouncing specimen of a man. With a walking stick used not for walking but for pushing the chairs out the way as we were lead to our restaurant table. And what did he order? - a beefburger and a pint of Guinness.

Grandad was an actor, a man who loved a bit of drama, a grand storyteller and a professional exaggerator.

Just before we sent him in to operation room yesterday I half expected him to pull off his oxygen mask, wink at me and in the words of Peter Pan from the movie Hook say: "to die will be a great adventure".

So Grandad: Enjoy your new great adventure. If it's ok by you we'll stick around here a bit longer and carry on having our own adventures. We'll remember to have a glass of whiskey every evening and remember that nothing is impossible."