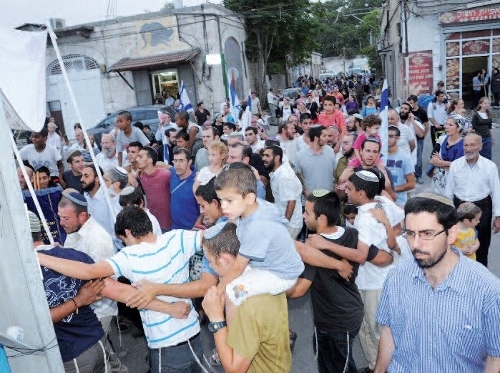 Joy ... Lod residents celebrate the inauguration of a Torah scroll

Lod challenges its inhabitants with many of the problems of a mixed town. It has sizeable populations of Arabs and Jews and a high poverty level. It is centrally located, close to Tel Aviv and Ben-Gurion airport, with good rail access and reasonably priced housing. I visited Lod to view some recent improvements and to talk with some of its movers and shakers.

Progress includes attractive new housing that has altered the landscape of neglect in some places and encouraged an influx of young families to the town. In the center of town stands Ramat Elyashiv, a brand new housing development for young couples of National Religious background. This impressively sized estate will accommodate 400 families and is almost completed. A smaller development, Ahuzat Nof Neria, will house 140 families, many of whom have already moved in.

Significant changes and upgrades have also taken place in Lod's disadvantaged Ramat Eshkol neighborhood, which is situated in close proximity to the bus station and shuk. Of the thousand or so families who live here, 750 are non-Jews and 250 are mostly Ethiopian Jews who were able to buy subsidized apartments in the area many years ago. Over the last 20 years, the neighborhood has deteriorated considerably. Recently, there have been attempts to reverse this trend. Changes include the opening of a pre-army academy for 80 young men, a daycare facility for 40 preschool children that operates in the community center and a synagogue that was restored from wanton destruction.

My guide was Aharon Atias (42), a native of the town, and CEO a social and educational NGO in Lod, the former Garin Torani. Atias took on the mission of revitalizing poverty areas of Lod some years ago. Members of his group are mostly young residents who are committed to community involvement and strengthening Jewish identity. One guiding principle of this nonprofit organization is to use Lod's existing educational facilities and upgrade them. The NGO now has about 400 members spread over four neighborhoods in Lod, Danny Kabzon (37) said. Kabzon has lived in Lod for 12 years. A computer programmer by day, he has volunteered for the last two years to promote the absorption of new families in the group. 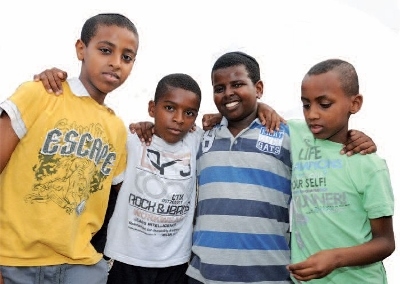 Lod youngsters on the day of the Torah’s inauguration

Though changing the difficult reality of the town is an arduous process, each improvement has a dynamic of its own which creates a ripple effect. The three-year-old presence of the Maoz (meaning "stronghold" or "fortress") pre-army program in Ramat Eshkol illustrates this effect. Maoz is housed in the former Maimon elementary school which had closed for lack of students. After basic renovations to the building, living conditions are respectable but simple. The building complex includes a study hall, dorms, kitchen and dining room. The sandy yard is used for sports and community needs.

"Since the pre-army academy opened, our neighbors of Ethiopian origin use this yard as a safe playground area for their children, whereas before they were afraid to venture outside their apartments. They also hold barmitzvahs and weddings there. We illuminate the yard for them on winter evenings," explains Rabbi Uzi Hovav, Director of Studies.

For periods of a year to eighteen months, these 80 young men study Talmud and Jewish studies. They learn how to cope with the army as religious youth, with an emphasis on developing their personalities and skills. Second year student Uri Lev-Ari (20) of Talmon said that he finds the studies and atmosphere inspiring.

"I came to a very dark, depressed, problematic neighborhood," he said, "But now the local kids come here to play football and their families feel freer to go outdoors." Lev-Ari has been very active in helping these families fix up their apartments and in rehabilitating the synagogue and daycare center.

Rabbi Hovav oversees the rigorous study program that operates daily from 07:30 to 22:30, with some students burning the midnight oil. There is a sports evening once a week, and on Fridays students volunteer in the community. They tutor local children, distribute food and help fix up buildings. Rabbi Hovav has seen his graduates develop into combat soldiers of high caliber. Now that the first ones are completing army service, he predicts that some will return to Ramat Eshkol to rent apartments and continue their lives there.

CEO Atias explained that Ramat Eshkol was built in the 1970s to absorb a wave of immigration and to provide affordable housing. However, the area has in recent years become a mainly Arab neighborhood. "We set up the pre-army academy in this neighborhood to improve living conditions," says Atias. "Now in our third year here, we see a great improvement. Though there have been some nasty incidents and threats, after the police came in and showed some muscle, the security situation has gotten better. Many people view our endeavors as the last hope of the neighborhood. On Chanukah, students went around to all the Jewish homes for candle lighting and to bring some joy into the lives of the residents."

Municipal social worker for the Arab sector, Faten Alzinaty (36), resident of Lod and mother of four, also cites some progress in the deprived Ramat Eshkol neighborhood, such as "less violence, better communication between the residents, and improvements in the physical surroundings." Alzinaty has worked hard for these achievements, but her wish list for the poverty- stricken area remains a long one. Top of the list are playgrounds, afterschool centers and activities for children and youth, better housing, food aid, job training programs for the unemployed and education for the illiterate.

Unfortunately, extremist elements from the Islamic Movement sometimes fan the flames. A festive Chanukah parade last December was marred by stone throwing. The innocent message of a popular children's Chanukah song Banu hoshech l'garesh ("We came to banish darkness") was actually to blame. While the song tells how the small lights of Chanukah dispel the mid-winter darkness, some locals misinterpreted the singing as a threat to expel them. "It takes dedication and idealism to live here," Atias says.

Under his direction Maoz undertook a project to fix up the Dusa synagogue that worshippers abandoned fifteen years ago after constant harassment. The synagogue had been destroyed and burned and became a den for drug addicts. Maoz members cleaned it out and helped with its extensive restoration. Dusa is now a respectable meeting place that can accommodate 60-70 worshippers. It has heavy metal grillwork on the outsides of the windows – a necessary measure after vandals twice smashed them – and an ark that resembles a large metal safe. The project had the support of building supplies company Even VeSid and Electric Company workers who volunteered to restore the infrastructure.

Kabzon has helped eight young Jewish couples move into the Ramat Eshkol neighborhood but not without challenges, as the buildings are not aesthetically pleasing and the area lacks playgrounds. Because most apartments consist of only three rooms, they are not suitable for large families. Nevertheless it is possible to fix up their interiors, and he aims to settle more families there.

Shahar Ben-Haim (29) and wife Sarah (24) and parents of a 2-year-old child – moved to Lod four years ago to join the NGO, then decided to move to Ramat Eshkol. "We left a stable neighborhood 2 ½ years ago because we wanted a more pioneering experience," Sarah explained. Both are educators in local schools. Rental prices of 3-room apartments are around $400 per month, while the average apartment sells for $100,000, affordable prices for Israel. 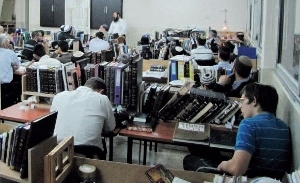 Time to learn ...inside the study hall of the pre-army academy

"It was scary in the beginning," Ben-Haim said of their entry into an Arab neighborhood. The couple was bothered by the drug culture, the noise of fireworks and gunshots fired into the air and the environmental neglect. Endemic problems were the rats and the persistent stench of burning garbage. Though originally their apartment was in poor condition and lacked basics such as window glass, shades and screens, they gradually fixed it up with the help of pre-army students. They have friendly relations with their Moslem neighbors, and there is cooperation, for example, in cleaning up the yard outside. They greatly appreciate the army academy, their "anchor in the neighborhood," and the daycare center.

Atias established the daycare center 18 months ago with just four children to start. Today it accommodates 40 children, newborns till age three, and provides welcome employment for local women. Since there is great demand for its facilities, he would like to double its size should money become available. The original donors were from Chicago, however this small community center fell into disrepair and is still being fixed up. The outdoor play area has a metal lined fence to prevent stone throwing, but problems of theft and vandalism persist.

Atias believes that coexistence and good relations must be cultivated through dialog and that problems should be solved on the level of community leaders. Meanwhile close cooperation with the police is also necessary to maintain law and order.

A version of this article previously appeared in the New York Jewish Press.