Knitting friends turn out to be real purlers 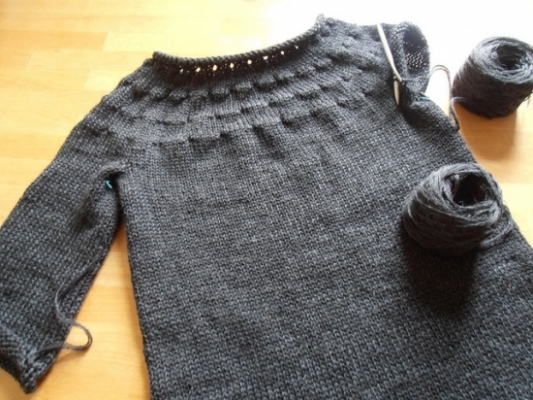 What a fun, exhilarating and rewarding morning we spent on February 11, 2014, at Ad-120 retirement home in Rishon LeZion.

Eighteen months ago Janet Kiesari, our chairperson, Shirley Frenkel and I (Shirley and I run the knitting group in Rishon) approached the cultural manager at Ad-120 with the idea that perhaps some of the women residents would be interested in helping us knit scarves for the children at high risk in Rishon LeZion. Our knitting group had already been in existence for five years, but up until 2012 we had only knitted and given the children sweaters at Chanukah. With the introduction of scarves as well as sweaters, we didn't have enough knitters to make the volume of sweaters and scarves that we wanted, hence our approach to Ad-120 to knit the scarves and our ESRA knitting group would continue with the sweaters.

Little did we expect the amazing cooperation and enthusiasm of our friends at Ad-120. They started off with knitting scarves, but within a few short weeks they were also knitting the most amazing sweaters. The group at Ad-120 gets bigger and bigger and the sweaters and scarves keep piling up.

Koka Greenberg, who manages and organizes the group at Ad-120, is a ball of dynamite and enthusiasm. She is so thankful that we approached Ad-120 with this project – she constantly tells us that she wouldn't know what to do with her time if it weren't for our knitting project. She knits constantly, as do many of the other co-opted volunteers at Ad-120 and whenever one goes into the lounge at Ad-120, there is a group of ladies sitting over cups of coffee and knitting.

It is all very well to have help from Ad-120, but our Rishon Knitting Group is responsible for supplying the wool. We have great difficulty in finding the funds to cover the cost of the wool, so when Koka called me ten days ago to say that they needed more wool, I had to tell her that we could not supply them at present as we had no funds in our kitty. Within minutes I had a call back from Ad-120 to say that they would organize a "yom truma" to collect funds for our project. What does this entail? First and foremost, Koka spreads the word at Ad-120 and somehow or other manages to get the residents to donate – the whole establishment is aware of our project because of the ladies who sit in the lounge and show off their work! The charity day took place on a Tuesday morning because Ad-120 runs a club on Tuesday mornings which is also open to non-residents, and so there is a constant flow of people coming and going. Against this background we put out a display of sweaters and scarves, ESRA Magazines and ESRA posters, and explained to anyone who stopped – or who was stopped by one of us – what ESRA does and why we are having this charity day. So many people opened their hearts and their wallets – out came NIS200, NIS100, NIS10, whatever people wanted to give. The praise we got for our project and the enthusiasm with which the donations were given was heart-warming and the funds collected will go a long way towards keeping Ad-120 supplied with wool, and the kids will again have a warm and heartwarming Chanukah in 2014.

This past Chanukah we handed out 330 sweaters; this coming year I am expecting to have a lot more, thanks to our friends at Ad-120.