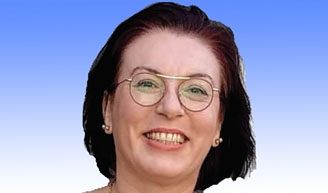 Kinneret Zohar-Lahav ... has a wide scope of subjects

It was cherished, caring, feisty Marilyn Ronen z"l, who first introduced us to Kinneret at the Tel Aviv University ESRA Art College with a lecture on the Etruscans that bowled us over.

Kinneret's explanations were so clear, the visuals and revelations so surprising, that I was entranced, wanting only to hear more and more. Her wide scope of subjects includes Archeology, (which she calls the baseline), Art History, Design, Cinema and Photography. Since then, I have heard her lecture on female artists, Tamara de Lempicka, Kahlo and photographers Dorothea Lange and Cindy Sherman, as well as Munch and Warhol, at galleries, museums and on stages throughout the greater Dan area - as well as on Cary Grant. Yes, he was Jewish!

Most riveting is Kinneret's ability to cover any subject with such scope and clarity that one feels one has learned everything about it when she has finished speaking. The what, the why, the where and what for of the genius, the mystique and the secrets have been revealed.And one leaves in total awe and understanding.

My curiosity led me to interview Kinneret - to delve into her story and magic for our readers, here in her own words:

"My father was a whole-hearted Zionist career diplomat for Israel, a gentleman who spoke the King's English impeccably and served Israel with pride alongside my mother. I was born in Bombay and spoke perfect Hindi at two, taught by my Nanny Lily. After a period in Israel, our next station was Houston where the Jewish "J.R. Ewing family mansions" reigned. My pigtails, sandals and lack of a mansion rendered me a nonentity to my peers. I was driven everywhere, including mansions that boasted cascading waterfalls and exotic fish ponds.Inside the house, devout Christians would often fondle my hair at black-tie Israel fundraisers (saying they were looking for my horns!). Our next station, Norway, was a return to sanity and freedom for me. Here I got my own bike, as well as tram and rail passes to explore safe and compact Oslo and study at an excellent school with small classes and the finest labs and equipment. I loved the understated "normalcy" of Norway.

My parents always dragged me to every museum imaginable, saying: "You will thank us for this one day!"

Upon my return to Israel at age sixteen, I was enrolled in the Rene Cassin High School with thousands of other teenagers in a barred, prison-like structure. It was my art teacher Lihi Hadash, today a senior curator at the Israel Museum, who instilled in me the passion for art.

In the Army, I served under Nachman Shai at the IDF Spokesperson's bureau. He was a wonderful commander, who really saw and directed his soldiers.

While my father became an ambassador, stationed in Alexandria, Egypt and my family relocated again, I began my studies of Art History at the Hebrew University. Knowing that they were living in a constant state of threat, with snipers aimed at every window, was exceedingly stressful for me as family visits were also forbidden by the Foreign Office. Being a diplomat's child does not come with instructions and during the repeated periods of strife and "Operations", life was a dangerous free-for-all.

After my studies, I tried teaching, simultaneous translation at King Hussein's yacht club for the peace treaty negotiations and doing admin on the Route 6 project, but realized that lecturing was my real – and perhaps only – forté.Except for being a caring mother to both my sons, I even outsourced my cooking to my husband…

So, although hundreds applied, I was happily accepted to the Israel Museum because of the lively way I gave tours bilingually. For guides, it is a requisite there that all subjects and techniques be learned by heart: ceramics, metals, stones, fabrics, as well as all schools of art. I worked for eleven years there and at Haaretz Museum with great joy. Thereafter, I wanted to have a child and decided to become a freelance lecturer. With no PR person, agent or rep - just through word of mouth and FB."

Kinneret "preaches" the love of art and wants to show what imagination can bring. "People want to know, believe and feel things. Time is our biggest asset, as we lack it. If someone is gracious enough to give me of their time, I will make it as worthwhile as I can for them." Tens of hours – and sometimes weeks - of research go into the preparation of every subject. There is no gallery or newsletter of which she is not on the list. Her diligence has paid off – she kicked off the Tel Aviv Museum's new season with a resounding lecture on Da Vinci this month and is a featured lecturer and guide.

Kinneret reads about two hundred missives a day, researches art sites in depth and gets to their very essence to give listeners a whole picture – to enable them to understand the circumstances, the family background, the emotions and psyche of the genial art created by the artist.

Her dream?To make a name for herself as a lecturer like her role model Prof. Michael Har-Sagor, "a most generous, kind, art-history lover who was a walking Wikipedia of art."

And – having her lectures fill up within hours of their being announced!