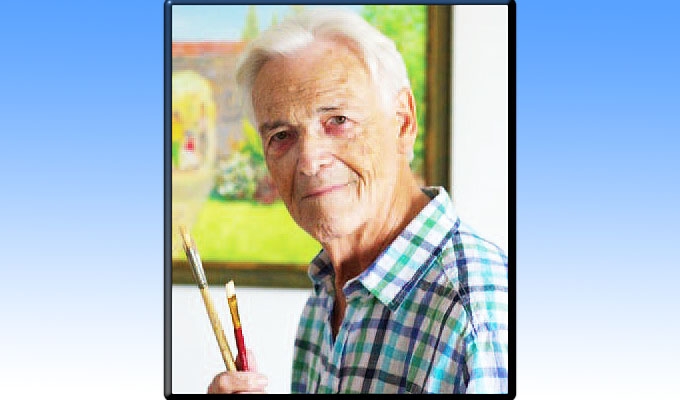 John was a dear friend. Together with Brenda, who is greatly admired for her work with ESRA and IBCA, they were a devoted couple. But because John was such a modest and unpretentious man, most people, even close friends, knew little about his life and achievements,

Thus the aim of this short article remembering John is to illuminate some aspects of his life's journey that took him from Nazi Germany to England, and finally, in August 1998, to Israel.

The Katten family tree traces seven generations of Kattens living in villages or towns around the city of Marburg, in the German State of Hessen.

John's paternal grandfather was a teacher and Baal Tefillah in a synagogue in the Poppelsdorf district of Bonn. His maternal grandfather Michael Guttmann was an eminent rabbi. Born in Hungary, he represented the Hungarian Jewish community at the official opening of the Hebrew University in 1925. A professor of Talmud, he headed the Rabbinical Seminary in Breslau. It was to this school that Max Katten, John's father, came to study in 1924, and where he would meet and marry Vilma, Rabbi Guttmann's daughter.

John was born in 1928, his sister Marianne three years earlier. In 1930, the family settled in Bamberg in Southern Germany, where his father was the rabbi of the Jewish community, then numbering some 1000 people.

At the age of eight, John entered the prestigious Bamberg Gymnasium. Two years later all the Jewish children were expelled from the school.

At ten years old, John witnessed the Nazi destruction of the Bamberg synagogue on Kristallnacht, November 9th 1938. The sight of smoke rising from this ruined building remained etched in his memory for the rest of his life.

The following year the family left Germany. With visas in hand, they immigrated to England. Their worldly possessions, apart from suitcases, comprised 25 shillings, the sum permitted to take out of Germany. After many difficult years, John's father, as a retired rabbi, began receiving a substantial pension from Germany, and the family could then afford a more comfortable way of life.

Despite the fact that John's schooling in Bamberg and London had been so fragmented, he was nevertheless accepted at the age of 16 to study Architecture at the Polytechnic in northern London, graduating with professional qualifications when he was only 21 years old. 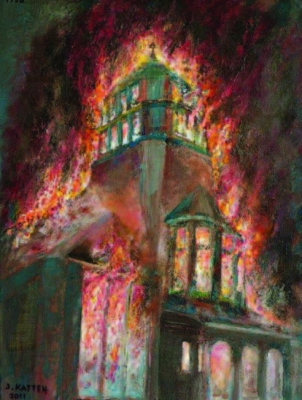 In flames ... John’s painting of the destruction of Bamberg Synagogue on Kristallnacht

His independent career took off a few years later when he was head-hunted by a Greek shipping magnate looking for a young architect to build a grand home for him in Hampstead Garden Suburb. His commercial work ranged from restaurants and housing complexes to offices and hotels; the largest contract being the building of Warsaw's Air Terminal, an enterprise costing over 100 million US dollars. Nominally he worked in partnership with a firm of Polish architects, but apparently their main interest was to come to England and have a good time.

Other commissions followed in Poland, England and on the Isle of Man, among them the design of an industrial complex for De Beers to house a secret process for manufacturing artificial diamonds.

Given John's traumatic history, he was particularly moved to be chosen to build two synagogues. One was in the grounds of the Hasmonean School in Hendon. The other was in Mill Hill, where Brenda and John were then living, and where their sons would have their barmitzvahs and where two of their children would marry.

At the age of 88 John retired, having lived and worked for 18 years in Israel, first in Herzliya, and then in Netanya. Last year, on his 90th birthday, Brenda and John celebrated their Diamond Anniversary, marking 60 years of marriage.

On his retirement John continued to express himself creatively through his lifelong hobby of painting. He also wrote poetry. A verse from one of John's poems, titled The Tree, suggests a philosophical approach to life, and touches also on his religious heritage and love of nature: "In long forgotten places in my mind, it is in these the hand of God I find. Not in man's glassy towers do I see the beauty of a great majestic tree."

John is survived by Brenda, his three children, Deborah, Michael and Adam, and eight grandchildren.