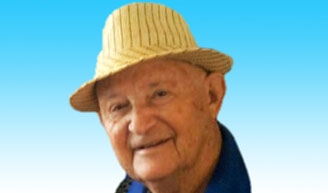 Dad was born in 1930 soon after Ouma and Oupa came from Lithuania to Windhoek, South Africa.

He matriculated from SACS in Cape Town and then studied civil engineering at the University of Cape Town.Not many people can say they grew up in the house that their father had designed and built.The house was called "Simcha" as we moved into it on Simchat Torah.But more important, it was a home of simcha.

Dad then became THE expert demolition expert in Cape Town, if not in SA.He was innovative in his design of equipment and changed the face of Cape Town with his demolition and the modernization of the city. He used to come home filthy dirty after a day supervising a difficult demolition.He was so enthusiastic about his work.

Dad was a lover of any form of art and became known as one of the most important collectors of art in Cape Town.His first earnings were spent buying a painting for Ouma and Oupa, and the day I was born he was at an art auction and the painting is hanging in the lounge.

Not many children spent their weekends either on a building site or in the art galleries around Cape Town.

Dad was very involved in volunteering in the Cape Town Jewish community.He ran the local Jewish cub and scout group, built the stalls for the Herzliya and Yom Haatzmaut fetes, distributed schach for Sukkot and was involved in the maintenance of Glendale.He and Mom taught us the value of involvement in the community and about our rich Jewish heritage.

In typical Jack fashion, at the age of 66 after retiring, he returned to UCT and at the age of 70 graduated with a BA degree in art and gender studies.We were so proud when we cheered him - he was the oldest student at graduation.

In 2000 Mom and Dad retired to Kfar Saba in Israel and once again Dad became involved in volunteering.He worked at the Kfar Saba trampiada, fixed the wheelchairs at Yad Sara, packed and delivered ESRAmagazines, and lately folded the receipts for Kav Lechayim.

In Cape Town and Israel, Dad was an active member of klabberjas schools and enjoyed hosting the twice weekly games at home and being the senior player.

He always loved entertaining and being surrounded by family and friends.

And he loved life, was a very happy person and was interested in everything.He never complained, even when his health circumstances changed and always said "everything is excellent".

He fell after his exercise class on his way to have coffee with his friends. What he managed to do in the last month of his life epitomizes so much of what was important to him and he was so happy. He lived life to the last minute.

Three weeks ago we were in London celebrating Jonathan's barmitzvah. Dad beamed from the bima, standing with Jonathan, Martin, his nephew Myrum and his great-grand-nephew Toby, named after his beloved sister Taube. At the party Dad recited the shehechenu prayer, as he felt so grateful and privileged to have lived to celebrate the next generation being called to the Torah.

He then blessed Jonathan after giving him tefillin and said: "This tefillin comes as a special gift from us on your barmitzvah. When putting on the tefillin, may you always remember our rich Jewish and family heritage. These straps connect you to your past, present, future and to our people."

A few weeks later Dad so enjoyed the Nurick reunion and being once again surrounded by so much family.

Last week he was so enthused to help Tali with her engineering project, redesigning an insulin injector for elderly and blind people.

Mom and Dad travelled the world and Dad was always willing for another trip. They were partners for 57 years.

On Simchat Torah, Dad enjoyed the kiddush after being called up to the Torah. I looked down on him saying kaddish during Yizkor, never believing that was the last time we would be in shul together.I felt so privileged that I could say the prayer for having two parents alive. "Dad, next time I will be saying Yizkor for you."

He loved being part of the Jewish community. But above all, he loved his family and was a caring son, husband, father, father-in-law, grandfather, brother, brother in law, uncle and cousin. He and Mom were such devoted parents and gave us, their children, more than we could have asked for.

Dad loved every minute of being with his six grandchildren and was so proud of them.More than that, he was so happy to see what decent people they had grown up to be. He always waited for their visits or calls to hear how his princesses and prince were getting on.

"Dad, you have now made your final trip. We know you will be looking after us and watching our progress.We hope to continue to make you proud and every Friday night we will stand for a minute, remember you with great love and silently receive your blessing. Rest in peace."