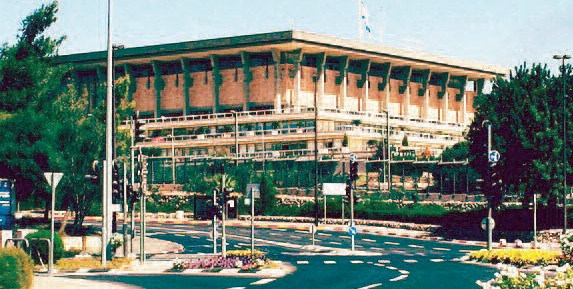 The Knesset building in Jerusalem

"It's easy to forget, but important to remember that Israel is a bastion of Western democracy, the rule of law and impartial justice...," Brian Fink, author of ,'The Essence of Democracy' Trip, ESRAmagazine, Issue # 186.

The heart of the trip was a 90-minute tour of the Knesset. We are informed that the dominant architectural features are:

[1] lines, this being inferred from Psalm 119.137 "You are righteous and your laws are straight".

85.12 "Truth will spring up from the earth and justice will be reflected from the heavens."

Fink also observes that there are allusions everywhere to the deep roots of Hebrew culture "in this ancient land."

"Buyer beware" would have been more appropriate given that Israel selected parliamentary democracy over representative democracy; and accordingly to reference selected biblical quotations in a State which does not conform to the teaching of Shoftim is obviously misleading.

In a Ynet opinion peace entitled, "Israel needs a major electoral reform" by Arsen Ostrovsky, published on 12/10/2014, he introduces the subject by acknowledging that the current system of government may have been appropriate in 1948 at the founding of the State. Now, it is long past its use-by date, "---no less than a paradigm change will suffice"; in light of the myriad of national security and forthcoming security and domestic challenges.

Ostrovsky highlights the key cause for Israel's dysfunctional government: "Israel's electoral system, which is based on nationwide proportional representation also has one of the lowest electoral thresholds in the world." The low electoral threshold is recognized as a reason why every Israeli government has been dependent on assembling and maintaining fragile coalitions.

Among the host of root causes that go to the heart of the systematic deficiencies with Israel's electoral and government system, Arsen Ostrovsky lists a lack of accountability, with individual Knesset members elected based on their position on a party list and not directly by the constituents.

He also points to the resultant self-serving politicians who care more about staying in power and more elected officials who put their own interests ahead of the nation. His ultimate summary desire is a call for a nationwide grassroots campaign to highlight the importance of change and to raise awareness of the need for reform among the subject politicians.

The Jerusalem Post published Lior Akerman's "Is Israel a true democracy?" on May 15, 2014.

Sadly, he answers that no one actually cares.

In studying the given subject on several Israeli government websites, what he found was that the State of Israel defines itself as a parliamentary democracy. In studying the latter, he learnt that it is a democratic system of government in which all the citizens choose their representatives for parliament according to their political affiliation and then the political parties choose their leaders. Back then, no one thought it was important that Israel be a democracy.

Political leaders are still not democratically elected by the people, and the latter has become completely apathetic. The police are underfunded and as a result is too weak to deal with "price tag" offenders or growing corruption among government leaders.

Lio Akerman's summation - Is Israel a democracy? Maybe it is an oligarchy, or an aristocracy, or some sort of anarchistic monarchy?

Alex Bain's "Israel's Flawed Electoral System: Obstacle to Peace and Democracy" was published on February 1, 2011 by Middle East Institute. His commencement remark on Israel speaks volumes. "Israeli politics are notable for their wide array of parties and unstable coalition governments. The main institutional cause of this chronic instability is the system of nationwide proportional representation, which gives disproportionate influence to minor parties. Bain recognizes that electoral reforms, which increase accountability and promote governmental cohesion, would provide the basis for a more stable and effective system of governance, and help ensure the future of a liberal and democratic Jewish state. He is amongst the few to recognize that Israeli legislators (MKs) are elected through a state-wide system of voting, in which the entire country is treated as a single electoral district. Israelis cast a vote for a single "list" of candidates.

Thus, he is fully aware of the Israeli system discouraging accountability. In this, Alex Bain quotes famous historian, Bernard Lewis "----- a significant disadvantage of the present system is that there is no direct relationship between the elected members and the electors … the member iis only responsible to the party leadership or, worse still, to the party bureaucracy."

On February 2, 2019, The Jerusalem Post published Daniel Samet's, "It's Time for Electoral Reform in Israel." He joins a similar refrain in advocating MKs to once again raise the voting threshold in the interest of a functional state as they did five years previously. A higher threshold would strengthen big-tent parties, reduce political fragmentation, and deliver more effective governments. Samet also advocates a district-based electoral system noting that currently Israel has no electoral districts, meaning voters select parties based on national considerations. The Israeli system is unlike that of the United Kingdom, for instance, where candidates run in specific districts and are directly accountable to the constituents they represent. Daniel Samet concludes with, "It's clear that MKs should come together to reform an outdated electoral system that no longer creates functional governments."

On April 7, 2019, Dov Lipman entered on his TOI Blog, "Agenda Item for the next Knesset: Electoral Reform." He commences with, "The average Israeli has no say about who represents them, and that's not only a shame, it's a failure in democracy."

Lipman divides the needed revisions into three primary categories: regional representation, raising the electoral threshold and separation of powers. These categories are self-evident and consequently not in need of repetition. On the other hand, his intention to create a Knesset lobby for electoral reform is somewhat novel. Its defined purpose is to create a healthier Israeli democracy "in which citizens have true representation in the parliament, more effective MKs and ministers and in which the Knesset is truly representing the will of the people."

According to Haaretz on December 03, 2018, "Almost Half of All Israelis Fear 'Grave Danger" to Democracy in Their Country". This piece written by Judy Maltz, is based on an Israeli Democracy Institute's Poll.

Close to half of the respondents [47%] said they thought that Israe's leadership was either "quite" or "very" corrupt. Perusing back issues of the media tends to confirm this opinion

Mosaic of September 9, 2016 featured Emmanuel Navon's, "The Right Way to Make Israeli Politicians More Accountable". In his opening statement, he remarks, "Israel's political system suffers less from instability than from a lack of accountability. Members of Knesset [MKs] are not answerable to voters-------MKs are only answerable to their boss." Why is this important?

In the US, which is the epitome of representative democracy, members of the public can appeal to their Congressman and/or Senator for assistance in dealing with an intransigent police or court. This one cannot do in Israel with its parliamentary democracy. By way of the "public's right to know," consider the following, by way of an actual example.

Mks will not avail themselves to assist in the given example. In the name of democracy, the time for electoral reform is overdue.

Typical references to
the prevailing issues:
■The Jerusalem Post: Israelis' level of trust in the judicial system at 17-year low,report finds [Sara Rubenstein 11/06/2018]

■Kohelet: A Detailed Proposal for a Feasible Electoral Reform [September 17,2017]