How Kibbutzniks made Secret Ammo 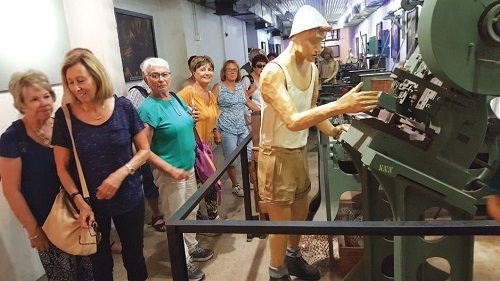 ESRA members at the Ayalon Institute Bullet Factory view one of the exhibits. Photos: Uri Themal and Dennis Kaliser

The Ayalon Institute, now a museum, was a secret ammunition factory disguised as part of a kibbutz to fool the British in the 1940s.

Beginning in the 1930s and during the British Mandate, a training center was established near Rehovot to prepare people to establish their own kibbutzim. This area was called "Givat Hakibbutzim" – Kibbutz Hill.

Realizing the need for ammunition, the Hagana established an ammunitions factory under this hill, which was near a British base. In 1945, the group built structures on the surface that resembled a kibbutz and in about three weeks, they built an entire ammunitions factory eight meters underground. The factory was about the size of a tennis court.

The people involved in the project worked very hard to conceal the true purpose of this kibbutz. They used different means to trick the British soldiers, who often visited the site. At its peak, the factory produced about 40,000 bullets a day. Once the bullets were produced, they were smuggled out of the factory to places all over the country.

Yosef Avidar, who was the head of the Israel Military Industries, brought the bullet-making machines from Poland and they were able to put them into the underground factory. 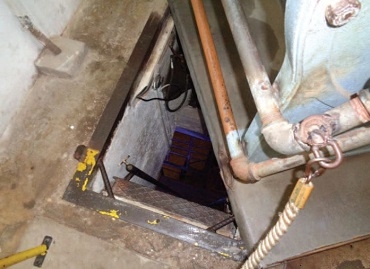 They devised an intelligent way of silencing the noises of the machines by having its openings covered by a 10-ton oven and a large washing machine. The washing machine was in use all the time and it became a problem for the kibbutz members because all of their clothes were washed so many times that they became threadbare. Again, they came up with a great way of masking their true intentions and created a 24-hour laundry service, so while they were hiding their secret, they could also raise money. Not all of the members in the kibbutz were aware that there was a secret underground bullet factory right under their homes. These people who had no idea were referred to as the "Giraffes" by all the secret factory workers.

Forty-five men and women risked their lives every day for three years to keep this project going. Every day, they would go underground in less than three minutes and begin their risky jobs of manufacturing thousands of bullets. Not only were they under the close watch of the British, but they were also working in dangerous conditions. There was no sunlight underground, so a lot of the workers fell ill from lack of vitamin D. They used a sun lamp to tan their skin so it wouldn't look suspicious. They also got extra rations in the dining room and if the person in charge of food was suspicious, she kept it to herself. Every day when leaving the factory, the workers had to make sure they had no traces of copper shavings or gunpowder on themselves. Everyone went through a thorough inspection of their clothes, hair and shoes before being allowed to leave the factory.

The workers had to make sure their product was safe and complete, so they randomly sampled bullets and shot them in the factory at targets to check for accuracy and precision. To transfer the bullets, they started by putting them in big milk cans, and later switched to putting them in fuel trucks. They devised devious ways of loading and transporting the bullets, because the British were keeping a very close watch on them.

The factory stopped operating in 1948, three years after being built, and the ammunition production moved to the Tel Aviv area and developed into what is today known as IMI (Israel Military Industries) or "Taas."

In 1987, the factory was restored and turned into a museum that is now open to the public.