How Israel got to grips with its trash 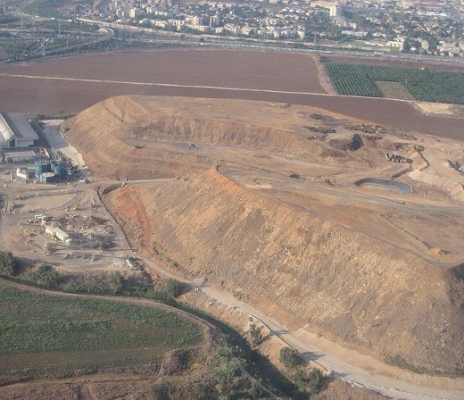 During the second half of the 20th century, Hiriya (above) was Tel Aviv’s garbage dump

Did you know that metropolitan Tel Aviv has a park that is bigger than New York's Central Park? Or that the park's most unique feature is a mountain of trash? That's what you'll find at the Ariel Sharon Park, almost 2,000 acres of reclaimed land located in Israel's most populous region, Gush Dan, where 40% of Israel's population resides.

Hiriya was Tel Aviv's garbage dump for the second half of the 20th century, eventually containing more than 25 million tons of waste. It was a smelly eyesore which grew larger and larger, fulfilling its name, Trash Mountain.

Apart from the sight and smell, the dump damaged the ecosystem by leaching toxic runoff into two streams. Thousands of birds were attracted to the garbage, creating safety hazards for planes flying to nearby airports, including Ben Gurion International.

Israel has been playing recycling catchup with the rest of the western world in the last decade, but has lately surpassed both Europe and the United States in recycling plastic bottles. In water recycling, arid Israel leads the world by a huge margin. Israel produces about 25% of its water by desalination and recycles about 75% for further use. For example, America recycles 2-3% of its municipal waste water, while Israel recycles more than 80%. Still, Israel has much more to accomplish in other waste management areas; Ariel Sharon Park is a huge step in the right direction.

In 1999, the Ministry of Environmental Protection decided to stop dumping waste on the garbage mound and to turn Hiriya into a transfer station, while repurposing the area into a park that would be at the forefront of environmental engineering. The process of rehabilitating the trash dump coincided with an international architectural competition to choose landscape architects for the ambitious project. The firm of Prof. Peter Latz, a celebrated German architect known for his emphasis on reclamation and conversion of former industrialized landscapes, was chosen.

Containing the waste was the first challenge. The slopes and walls of the giant mound were stabilized and reinforced using salvaged concrete debris from construction projects. Then the landfill was capped and covered, allowing the methane produced by the still rotting garbage to be collected and used to power a nearby textile factory.

Sited near the entrance to the park at the base of the mountain is the Hiriya Waste and Recycling Center. About 1,000 truckloads of household waste are processed here daily; 80 % of this waste is reused or recycled. In addition to the recreational and educational usage of the park itself, the recycling facility has become a destination for students and others interested in solutions for waste management.

The design requirements for the park included rehabilitating the area without flattening or demolishing the mountain. . The 61 meter high mound was intended to be a focal point, allowing the history of the landfill to educate Israelis and visitors from around the world. The western face of the mountain features a beautiful pergola and scenic vista, which provides visitors the highest vantage point over nearby Tel Aviv and the Mediterranean Sea. (treehugger.com)

Various types of landfill rehabilitation are showcased in the park: there are biological sub-systems to produce bio-gas to create electricity, recovering glass and metal in the process; there is the methane gas recovery; soon there will be a recycling plant for tires, another for building material, and yet another that turns plant prunings into ground cover that Israelis are encouraged to use instead of water-guzzling grass.

Sharon Park extends into south Tel Aviv and that section (Menahem Begin Park) includes a lake and wet lands. On completion in 2020, a proposed 50,000 seat amphitheater will provide a huge venue for concerts on an international scale. Almost miraculously, a park has been created from a garbage dump and wastelands which is both a place for leisure and an ecological masterpiece (touristisrael.com).

We visited the park-in-process with high expectations, and we weren't disappointed. What was once a huge blot on the landscape has become a great attraction and green lung for the Dan region. From the parking lot we were whisked by bus to the top of the mountain. There we encountered a beautiful landscaped expanse, including wetlands, ponds, beautiful plants, the ubiquitous cafe, and a special exhibition. 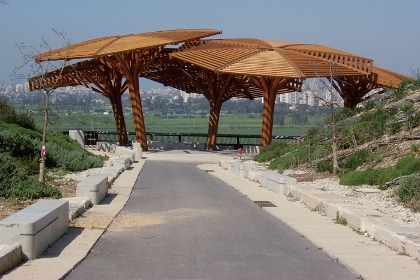 "Trash People" is a monumental exhibition that has been traveling the globe for 18 years. It has been displayed in the Alps and at the Great Wall of China, in Mosscow's Red Square and by the Pyramids. Totally appropriate to its setting, the hundreds of "people" are human-sized figures constructed from tons of recycled materials, including iron, glass, computer parts, cans and more. Some of the figures were specific to the exhibition locales, including one that was composed partly of computer parts designed in Israel and Israeli pickle tins.

Trash People is the creation of German artist H.A. Schult, one of the most controversial artists in the world, whose name has become synonymous with the employment of used and recycled materials. Our friend Howard, who has seen China's incredible Terracotta Warriors, noted the similarities between those ancient human models and Schult's modern version. Observing the legion of figures from above, and then standing among them, was an amazing experience.

We thoroughly enjoyed our visit to Sharon Park and look forward to exploring other sections of the park in the future. Sitting under the fabulous and unusually designed wooden pergola, with the towers of Tel Aviv and the sea before us, we knew that Israel's accomplishments bode well for its future, despite its problematic status as "a villa in the jungle" (a phrase attributed to former Prime Minister Ehud Barak).

Contact details:
www.parksharon.co.il
This email address is being protected from spambots. You need JavaScript enabled to view it.