Honor for Man who Gave Back 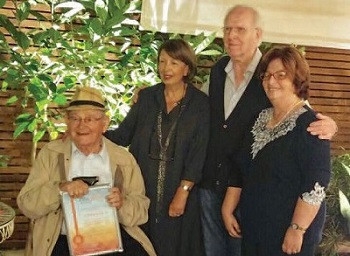 Acts of kindness never die. They linger in the memory, giving life to other acts in return. (Rabbi Jonathan Sacks)

On November 7th ESRA honored David Klein at a special celebration held in the beautiful little garden of Adele and Michael Hunter in Raanana.

In 2007 David, together with ESRA, established the Leah Klein Scholarship Fund in memory of his mother. Through his generosity he has enabled to-date over 350 students to fulfill their dreams of completing their university or college studies. David was honored not only for his monetary contributions but for the difference he has made to the lives of those students.

During the evening three students who were recipients of David's generosity shared their experiences with the audience. They spoke about what it meant to them to feel that someone, a complete stranger, believed in them and that their dreams could come true. Whether it was the architect who would now be able to complete her studies, the student who ran away from home as a young teenager and now works with teenage girls at risk, or the young students from Siberia and Ethiopia, they all expressed their gratitude to David. They said that he was a role model for them and that one day, when they can, they hope to give back to others in need as David had done for them.

In addition, students from the ESRA Build a Community Projects in Netanya, which also benefitted from the generosity of David, shared their experiences in the project and the difference it has made to their lives.

David Klein does not seek glory or even recognition but he deserves it. He has helped so many and will help many others in the years to come. He is an inspiration to all of us, especially to the students who can learn from David's own life journey from the small town in Transylvania; to incarceration in the concentration camps; to immigrating to America, penniless; who, as a hard-working and determined young man on the way to success gained the respect of many in his field of art, and finally to Israel a few years ago which he calls home and his one desire—to give back.

Who would have thought, let alone David himself, as he sat in a cheder in Transylvania, that his life journey would take him back and forth across continents and in and out the homes of some of the most serious art collectors in the world, and that when he would retire he would share his generosity with students who dreamed of a better future but had a hard time realizing it. David's scholarships awarded to deserving students changed their lives and left those who have come in contact with him, especially the members of the Welfare Committee at ESRA, in awe.

David's passion for art began after his release from the concentration camps to which he and his family were deported together with hundreds of thousands of fellow Jews from Transylvania. After the war as a young immigrant to America and later while in Paris during a stint as a draftee in the American Army, he frequented the major museums and art galleries in the United States and Paris. David immersed himself into the art world and his passion for art became his vocation. He brought beauty into the homes of many art lovers and collectors. His success can be attributed to his quiet manner and vast knowledge about art which earned him a well-deserved reputation of honesty and integrity.

But David came to realize that there was more to life than riches and success. Throughout his life he often donated to many worthy causes and when he retired to Israel he established The Leah Klein Scholarship Fund for Higher Education via ESRA. David takes a personal interest in all the students. He attends all interviews and listens to the personal stories of each and every one of them. Some are heartbreaking yet at the same time they are testimony to the tenacity of man and a determination of the students to succeed despite all the obstacles in their way. David has made it possible for these students to turn their lives around and complete their studies when otherwise they would not be able to do so. When they thanked David, they not only thanked him for the monetary gift but for the inspiration and example he gave them. Most of all, they are overwhelmed by the fact that someone cares enough to listen to their stories and to believe in their dreams.

In recognition of all that he has done, David was presented with a Volunteer Donor Award Certificate by ESRA and an album with the testimonies of 38 students whose lives were changed and will be forever grateful for the opportunity he gave them to succeed.

The beautiful and moving evening was organized, hosted and moderated by Adele Hunter, who has led ESRA's welfare committee for the past 16 years, with compassion and brilliance. It was she, who together with David, conceived the The Leah Klein Scholarship Fund.

Thank you David for your outstanding contribution to students in need and for working through ESRA with this project.