Homage to a Heroine 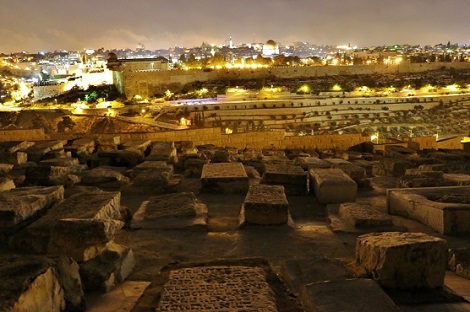 Story and photos by Richard Shavei-Tzion

Walking through the cemetery on the Mount of Olives at midnight of Yom Hazikaron, it is not difficult to understand the profound desire of generations of Jews to be interred there. Across the valley, the golden serrated walls of the ancient city stretch across the line of vision with its 20th century expansion rising above. According to enduring Jewish tradition, the resurrection of the dead will begin there. The first Jewish burials took place on the rock strewn ridge 2,800 years ago, give or take a century or two. And through the millennia, local Jews, as well as those living their lives in the far-flung recesses of our vast Diaspora, have expressed their longing for final rest on this humble hill, with full awareness of the dangers of desecration inherent in this fiercely disputed pocket of land.

Through the ages, at least 70,000 of our nation's people, whose tombstones are the only testament to their lives, have been entombed on its western slopes alongside many of our famous forebearers. Names such as The Ramban, Rabbi Avraham Yitzchak Kook, Henrietta Szold, Eliezer Ben-Yehuda, Shmuel Yosef Agnon, Boris Schatz, and Menachem Begin need no further elaboration.

But on this night, we have come to pay homage to 230 of our modern compatriots buried there, who have fallen so that we may live in this holy, tainted, mundane, eternal city; men and women, young and old, some whose parents' names are not known, some whose entire lives are undocumented. Sixty-three are buried in an organized military plot, the others randomly amongst the other graves.

Walking with care across the sometimes narrow, unmarked, unlit contours, with our ancient-contemporary capital glowing gold in the distance, I was touched to tears by the enormity of the sacrifice.

Aharon Herschler, born in Hungary in 1850, is recognized as the first to fall in the modern defense of our land. Aged 23, he was studying at his home in the fledgling Mishkenot Sha'ananim, when a band of Arabs broke in. As he chased them out, he fell in a hail of twelve bullets fired by the marauders.

I was surprised and moved to discover that one of the most recent military burials was that of Shlomo Mordechai Miller, a contemporary, born in South Africa like myself. In 2004, he fell to terrorist fire while defending the gate of his yishuv, Ithamar in the Shomron. He was 50 years-old and left a wife, parents and seven children.

Then, I came across a simple stone marking the resting place of Gracia (Yaffa) Harush. 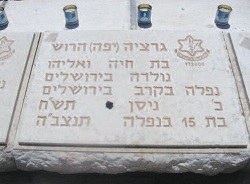 Daughter of Chaya and Eliahu Harush, Gracia was born on May 18, 1932 in the Old City of Jerusalem. The family lived on Karaite Street. Graduating from elementary school, she joined the Histadrut HaNoar HaOved, where she spent eight months in the Kibbutz Na'an training center, just east of Rechovot. Looking at a photograph of this pretty, vibrant youngster, I can well understand why those who knew her nicknamed her Yaffa, which is how this cheerful, talented and kind girl was known. For six months, she served as a liaison officer in the Gadna and was then dispatched as a soldier to the Old City of Jerusalem. At first she was stationed at the Warsaw Synagogue Post, and when it was captured by the enemy, she moved to the Porat Yosef position. On April 29, 1948, just two weeks before the Declaration of Independence, she found herself in combat with a fierce, hardened enemy. As she prepared to throw a hand grenade, she was hit by a bullet. The grenade exploded in her hand.

Gracia Harush was 15 years and 337 days old, when she fell in battle.

Her name is engraved on the monument in the military cemetery on Mount Herzl in memory of those who perished in the Jewish Quarter. Our country's young people have borne the brunt of our battle. I cannot help but gaze at the picture of this vivid teenager in wonder at the extent of her belief, commitment and valor at such an age. Earlier that evening, my wife and I had attended a memorial ceremony, where our 12-year-old granddaughter Ayala Tauber laid a wreath at the monument to Givat Ze'ev's fallen soldiers, on behalf of the town's school pupils. Contemplating a teenager just three years older than Ayala engaged in battle was shocking. It was a reminder of how tentative the survival of the State was at its inception and how desperate our military leadership must have been.

On a recent visit to the cemetery, President Ruby Rivlin noted: "Before me lies Gracia (Yaffa) Harush, the youngest fighter in the Israel Defense Forces, buried here on the Mount of Olives. Here lie religious and secular, university graduates, Yeshiva students, kibbutz members and citizens of settlements. These children are buried next to the students of the Vilna Ga'on, the victims of the 1929 massacre, generations of Jews. Those who have not walked among these graves cannot understand how deep our roots are, how deeply rooted Jerusalem is in our hearts." (My loose translation- RST.)

To give honor to the fallen is to magnify the joy and privilege of living in this country and this city. Blessed are their memories.