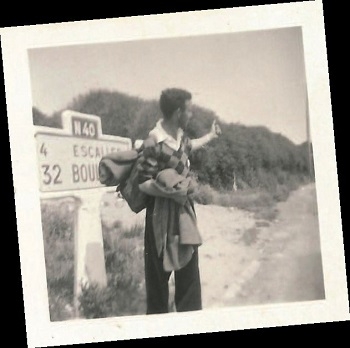 Thumbing a lift: A young Mike Porter in France

The winter of 1955 was a hard one, even for Europe. Blocks of ice drifted on the sea. At midnight, the freezing temperatures had dropped even lower. Waiting for a lift under the last street light on the outskirts of Bremerhaven, I could hear the wolves howling in the blackness around me.

I was a fool who had not known when to stop hitchhiking in strange countries. No more money in Norway; a jersey – my last bit of warm clothing – stolen at the youth hostel in Denmark; odd-jobbing at the labor bureaus of Germany: now I only wanted to see the shores of England, to be among friends in London, to get a job and wear comfortable shoes; to have a hot bath!

The last postcard sent to my parents in Johannesburg had been written with difficulty. My fingers looked like sausages, and I held the pen like a knife. Outside the post office, there was a blizzard. The cars crawling along the cobbles of the old Roman roads did not stop. I walked whole days, guarding two pounds which would see me across the channel, picking sour apples and sleeping in a haystack on the way.

England's shores, shrouded in drizzle, looked beautiful. But by the time I reached London and Earl's Court station, I was wet, cold and hungry.

The vast concrete concourse had a festive look. Lights twinkled sharply in the dusk. People wore colorful hats and sang songs. Three men sat helplessly on the stairs leading to the station, and fought a losing battle with some dimly-recognizable song.

Of course – December 24th. It was the night before Christmas.

After seven months of being unable to communicate with so many people, I was moved to hear English spoken around me. Coming out from the underground, I looked at the shivering crowds shuffling along the snow-covered suburb. Nothing had changed. To make sure, I inspected the names at every corner of one particular street. The same street, three blocks long, with three different names. Yes, it was good to be back.

It was late by the time I reached my lodgings, where I had left most of my belongings before setting off on my travels. The building was locked and in darkness.

I knew behind which brick near the coal-shed the elderly Irish housekeeper kept the spare key. Halfway down the stairs, I stopped. It was late. If Miss Nairnsey heard someone trying the door – no! I decided to find another place to spend the night. 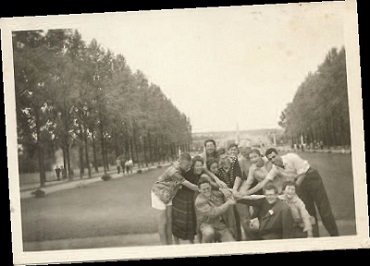 Oslo 1955: “I meet my first Israelis,” says Mike Porter who took the photo

I had heard stories of obliging policemen who let hitchhikers use a cell for the night. Some youth hostellers in Europe told me they had been saved this way. I trudged to a police station – I think it was Kensington. Politely they refused my request. Quickly I walked down the steps and into the snow.

Now what? I stood on the pavement, melting snow seeping through my battered shoes, and realized that I was alone in a city of millions of sleeping strangers.

No, not quite alone. There was someone. Two women I'd once called on to give regards from old friends in South Africa; a long time ago. Well – I did promise to come again… With fresh energy, I strode back to Earl's Court. They lived not far from my old lodgings.

It was now well after midnight, and the streets were empty. A light, cold wind was blowing, but fortunately it had stopped snowing. My footsteps sounded loud as they crunched through the hardening crust of snow and echoed between the long chains of apartment houses sleeping in the moonlight.

Luck came my way at last. I saw some people standing at the door of the building I was aiming for. A young couple went unsteadily down the street, leaving a man in a dressing gown staring moodily after them.

"Noisy blighters. Yelling and yelling. Don't care that they woke me up!" He must have spoken to me, no one else was around. I sounded sympathetic. Then, heavily casual, I said: "By the way, maybe you can help me. I've just come back from Europe, meant to see the 'Blanks' who live here, but its rather late..."

"By all means, come on up." I quietly let out a breath. I had come into contact with a scholar and a gentleman. In fact, his careful, cultured voice sounded like he was from a certain well-known college. It was gratifying that he did not seem to notice anything odd about my appearance.

We went up the dark staircase and entered a room. I dropped my rucksack on the floor, painfully straightened my back and sat down for the first time in about four hours. It must have been 2 or 3 o'clock in the morning, but my host put the kettle on the gas, and made tea.

The man was built on the lines of a tank. He had a thick neck set on heavy shoulders, and a chest which strained his clothing to bursting point. It was only when standing near him that I noticed how tall he was. He had heavy, but boyish features, and a pale complexion. I guessed his age at somewhere between 25 and 45.

His room looked wonderfully warm and cozy. It had a chair I could sit on, a plain bed in one corner, on which he sat, and a worn carpet. Three unpainted tin trunks were piled in another corner.

He saw me looking at the trunks. "Just back from a long stay in India," he said. "Haven't unpacked yet." This was his cue to bring out a thick photograph album, which he leafed through, explaining the pictures. "This is me running for college; here's where I belonged to the rowing team; myself and friends" and so on. Only in one photograph was he recognizable. Clad in vest and shorts, looking immense even in his college days, he was putting the shot. The metal shot seemed like a toy in his hand. He had also fenced and boxed, he told me. I don't recall any mention of studies.

A picture of a young woman fell out of the back of the album. Quickly he scooped it up in his big hands.

Suddenly he said: "Of course you're not married."

Rather abruptly I replied: "I'd hardly be walking around Europe if I was." If only he'd let me sleep.

He said he'd almost married, but had gone off to India instead. "Marriage is an unnatural institution: probably thought up by women. Look at it objectively. For the woman, it means fulfillment, security. For a man, it's life imprisonment." And so on, in the same vein.

My mind was getting duller, and the warmth lulled me to sleep.

Suddenly his voice, quieter now and almost in my ear, startled me. "Here, bed down in the corner," he said. Groggily I got up, unrolled my sleeping bag on the floor and must have crawled into it, because that's where I was when a pale sun shone on my face the next day.

"Good morning," said the man, already dressed. I blinked vaguely at the vast shape towering over me. It said abruptly: "There's tea and toast, hot water and a towel over the basin. Close the door properly when you go out; it will lock by itself." Before I could say anything, he was gone.

Had he been in a hurry to leave? I was in a hurry myself, so I didn't notice. I washed in the basin, trying not to leave too much dirt behind. Then, feeling almost human, I stepped out into the street.

Several weeks passed. I was back in my old lodgings. I got a job and a haircut. My good shoes no longer hurt when I walked in them, though they seemed rather small. I hung up my hitching shoes as souvenirs, but they smelled and eventually I threw them into the dustbin.

It was Sunday. The sun was shining. Feeling well-fed and comfortable, I strolled down the familiar street and to the friends I had almost visited that night before Christmas.

The old lady and her daughter peeped out from behind the door, and were surprised to see me. We went in and sat down. "London is such a big place, isn't it." I agreed. "People come, people go," I was told. I accepted this. "And us meeting again; it's a small world isn't it?" I was willing to agree to this as well. "By the way," I said, "I must go and see the man who lives on the floor below you."

The flow of talk stopped. The old lady looked shocked. "Eh, what... what man?"

I told them the story of the night I returned to London, and the two women looked at me as if I had made it all up. There was a long silence.

Eventually I said irritably: "It's true! He took pity on someone who looked like he'd crawled out of a dustbin; even the police turned me down. Is something wrong?"

"Something's wrong all right," said the daughter bitterly. "He fooled us with his la-di-dah voice, borrowed money from everyone, then disappeared."

"He'd been in prison," said the old lady. "They say he tried to kill his wife."