Hike in the Golan 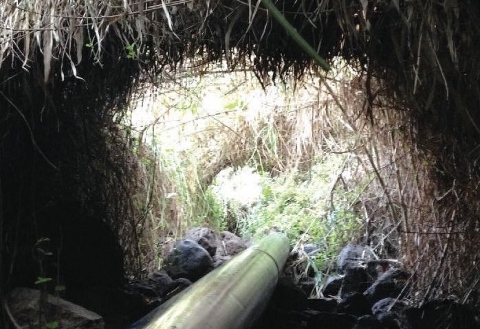 A lush green tunnel over the water

Five in the morning is a terrible time to be awake, with one exception. If you have to catch a bus at six thirty that will take you to a hiking spot sprouting lush greenery with the mountains of the Golan as your backdrop, then 5am can be worth it. After a short wait for the bus to pick up the group in Raanana, we headed north to the Golan.

The trip to the Golan Heights is roughly a two-hour drive, during which time the group chatted, slept, or read. When the coffee stop came midway through our journey, I know I certainly wasn't the only person excited to stretch and grab a borekas for breakfast. Then it was back onto the bus to watch the scenery change as we approached our destination. Our wonderful guide, Reuven, began to point out landmarks and points of interest along the way, including the mighty Jordan River – less mighty due to the lack of rain in the summer months. Still, the crossing of the river was the indication that we had reached the heights of the Golan, and the bus began to climb, dropping us at the peak of a very large hill where we began our trek.

It was a beautiful morning – clear skies, warm sun, and just a bit of breeze to take the edge off of what became a very warm day.

The hike began at a waterfall, with us on the opposite ledge watching the water cascade down the rocks into the valley below. The path wound down the side of the hill, skirting around very large rocks (boulders even) and leading us into the cool shade of the valley. We hiked through the valley, over rocks and steams, passing shade dappled with sunlight. Although hiking surrounded by 300 or so schoolchildren on an outing, there were times when all you could hear was the sigh of the wind, the crunch of footfalls, and solitary birdsong. Over rocks slick with spray, we hiked back up, and up, and up the opposite side of the hill to an overlook looking at the second highest continually wet waterfall in Israel. At 41 meters, the Jilabun waterfall is the second highest "wet" waterfall in Israel. Reuven explained a bit about the name and, after a short rest, we continued on across plains of thistle and an old Syrian military base to the climax of the hike, the Officer's Pool. Sadly, the pool was missing the essence of what makes a pool a pool –WATER! Six inches of water wetting the bottom rocks does not a pool make. What disappointment for those of us who had brought a bathing suit. It was here that we broke for lunch and then finished our journey hiking along the pool's runoff, sparking discussion about what would happen if one of the fish from the pool were to shoot out of the runoff pipe.

This was my favorite part of the hike. Everything was cool, and with the branches interwoven above our heads created a green tunnel for us to hike down, following the slow descent of the water. A short time later we emerged into sunlight and a wider path back to the bus. It was a fabulous hike and a treat for me, being outside in November when I'm usually bundled in layers against the cold of the North East USA. Muddy, sweaty, and tired but satisfied, all to be heard on the ride back to civilization was quiet.