Highlights from February’s ESRA trip to the Dead Sea. 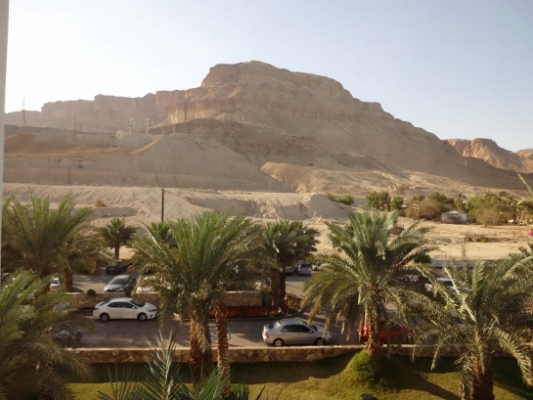 On the short ride from Ramat Aviv to the appointed meeting place at the Arlozorov Railway Station, I found myself wondering what the group would be like. As a newcomer to ESRA since moving from Jerusalem only a few years ago, my primary involvement has been as a member of the editorial board of ESRA magazine. This was our first organized trip with ESRA and we were headed for a three-night stay at the Isrotel Ganim Hotel in Ein Bokek, at the Dead Sea, with a full day of sightseeing on the way.

The group had begun assembling as we reached the bus stop, with eager travelers coming from as far as Haifa, Netanya and Modiin. Sandwich bags, water bottles and hats in hand, we boarded the bus and headed for the next pick up in Raanana, where we were met by our guide, Adina and trip organizer, Val Kantor. It was a beautiful day for the excursion down Route 6 toward the Judean Desert.

As the rugged landscape and ancient cliffs of the desert rose before us, Adina reminded us of the rebels and zealots who had found refuge and hiding places in its midst throughout history and the monks who until this day find solitude and isolation in the monasteries that remain from the Byzantine period. 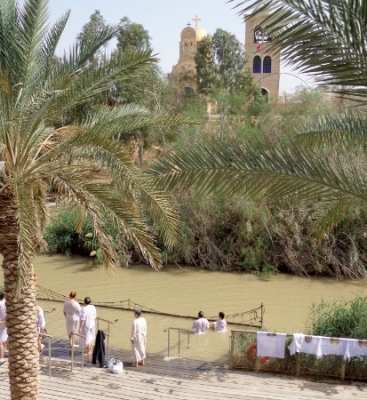 Kassar Al Yahud, a Christian baptismal site, north of the Dead Sea on the banks of the Jordan

The bus made its way down the winding road of the Mitzpe Yericho settlement toward an observation point overlooking Wadi Kelt and the breathtaking, primeval panorama of the entire Judean Desert. I pictured the Maccabees and other cults making their way across the very same terrain some 2000 years ago.

Our next stop was at Kassar Al Yahud, a Christian baptismal site, north of the Dead Sea on the banks of the Jordan River. The literal meaning of the Arabic name is Castle of the Jews. This holy site is the place where, according to the New Testament, the baptism of Jesus took place. It is accessible from the Jordanian bank of the river as well and people in long white robes could be seen on both sides immersing themselves in the water and congregating along the shore.

Following a generous buffet lunch at Kibbutz Almog, we stopped at the ancient synagogue of Ein Gedi, where a Jewish community had lived and thrived, primarily on the production of balsam, until its destruction by the Byzantine emperor Justinian. The synagogue is known for its well-preserved mosaic floor complete with an unusual inscription warning the inhabitants of ancient Ein Gedi against revealing to the outside world the secrets of the town, presumably the methods for extracting and producing balsamic resin.

We arrived at the hotel in Ein Bokek right on schedule and, after a smooth and easy check-in, retired to our rooms for some leisure time before dinner. There had not been too much socializing during the day, but that was about to change as the stories, personal experiences and talents of those who had boarded the bus together in the early morning hours were gradually revealed at the intimate pool area, over drinks in the lounge, dinner, music and dancing and planned group get-togethers. 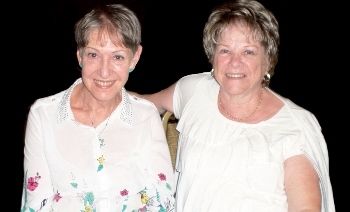 Some tender words from poet Kaila

The slight woman who sat poised at the table with books and papers spread before her had a shy demeanor as she looked out at the group. When everyone had taken their seats in the circle, she began telling her personal story, punctuated with moving and tender poems from various periods in her life.

Kaila Shabat, nee Katherine Rubin, was born in London in 1947 to an artistic and affluent family. However, separated from her parents at an early age, she endured a traumatic and abusive childhood, much of which was erased from her mind until years later when she underwent therapy. The effects of those early years would dramatically influence her life.

In 1967, Kaila came to Israel as a volunteer following the Six Day War. It was here that she met her husband, who has been by her side for 45 years and was present with her on the trip. Shortly after her marriage, Kaila became stricken with a condition that would ultimately be diagnosed as manic depression. Since then, she has battled with bouts of deep depression and psychotic episodes that required hospitalization. But, in her own gripping description on the evening we spent together, Kaila also described periods of prolific creativity and warm and loving times with her own nuclear family.

Many of the poems that Kaila shared with the group were about her illness as well as her husband, whom she claimed had "never once failed her" in their life together. We have reprinted one of these poems. Others can be found in a collection of 18 love poems entitled "Together" and available from Cyclamen and Swords Publishing, Israel.

I beheld you first on the thorny heights.

Beneath a glowering sky you appeared

amid the devastation of war:

with its sprinkling of blue thistles.

You came into view on the brow of a hill:

a handsome soldier driving a jeep;

yet joyous as you greeted your family.

I caught my first glimpse of you

through the window of the bus.

Not exactly love at first sight;

I just knew we would be together,

that you would be good to me. 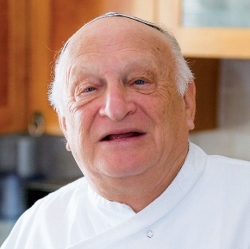 David Levy has run several businesses throughout his life, but his passion has always been in the area of food preparation. He ran Sheff's International Cuisine, a kosher restaurant in Manchester England, before making aliyah some eight years ago to Netanya. David is always happy to share his experiences and recipes with groups from ESRA and other gatherings. The trip to the Dead Sea was a perfect opportunity.

In a corner of the hotel lounge, David captured his mixed, male-female audience as usual with his wit and charm and delighted them with tips on three kinds of soup: chicken soup in which eggs shells are included to collect unwanted particles from the soup and save skimming, a tomato soup, which David claims is best when tomatoes are not used, but rather tomato paste, and a beetroot and potato soup.

Put everything in 4 liters of water until boiling

Simmer for two to three hours and remove the egg shells before serving.

On the last evening of the trip, a live duo played music of the 60s in the lounge and there was enthusiastic dancing and singing long into the night. In the morning, I took a last look at the eternally stunning and serene view of the Dead Sea against the Jordanian Edom Hills from our hotel room window before gathering our things and descending to the lobby for the return trip.

On board the bus, Rachel and Eli Navok shared with us the very moving news that their son Lior, an accomplished classical composer and conductor, was in Nuremberg at the time for the German premier of his acclaimed work entitled "And the Trains Kept Coming." This oratorio, which gives voice to the tragedy of the Holocaust, was chosen in Israel for the Prime Minister's award several years ago. But the fact that the piece, composed in Hebrew by a young Israeli, was being performed in Nuremberg in German was overwhelmingly exciting and got a round of applause from the entire group.

The bus made its way past the desert town of Arad, which now has a very energetic Russian born, female mayor who is trying to bring new life and stabilize the once popular development area that has witnessed a decline.

We also passed the sprawling Shikma farm, belonging to Arik Sharon's family, where he himself is buried high on a hill, before making our final stop at Kibbutz Or Haner. Located not far from the Gaza Strip, the kibbutz was established in 1957 by South American immigrants, primarily from Argentina and Uruguay. In addition to a popular Argentinian restaurant, Patagonia, the kibbutz takes great pride in a series of wall murals created by two Argentinian artists together with members of the kibbutz.

The bus returned us to our car at the train station right on schedule. We shall look forward eagerly to the next ESRA organized trip.