South African Jewry's participation in the founding of modern Ashkelon was celebrated at a function in Ashkelon on December 15, 2019.

As the last surviving CEO of the founding companies, Afridar and Afrihon, Selwyn Lurie was invited to attend the event to address those present on the South African community's involvement in establishing the city, and to receive two certificates of honor, one from the Mayor of Ashkelon and the other from Telfed.

Unfortunately, Selwyn and his wife Barbara were unable to make the trip from California. As a result, he was requested to send in a video and a representative.

Staff of Afridar Housing Corporation Ltd in 1956 . . .Selwyn and Barbara can be seen in the center of the second row

The Master Plan provided for five neighborhood units, Afridar being the first to be constructed as a model for the others. The plan also provided for a downtown city center, hospital, and antiquities area, and a large development along the foreshore. The first building to be erected on the foreshore was the Dagon Hotel, where my wife, Barbara, and I first lived for three months when we moved to Ashkelon. We then moved to our permanent home in Afridar in Johannesburg Street, No. 7.

The Master Plan also provided for a heavy industrial area well away from the neighborhood units. The first phase of development was headed by Max Spitz, when all the major works and housing, including the Afridar shopping center, were constructed.

The second phase was headed by Henry Sonnabend, when the project was first inhabited. The success of this period was entirely in the social field, welding together a reasonably happy and settled community. Unfortunately, this was achieved at enormous cost with no control over the financial position, which almost jeopardized the entire project. 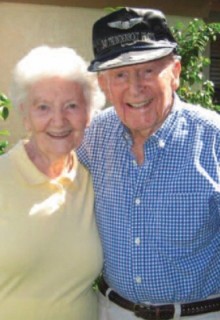 Barbara and Selwyn Lurie who now live in California. The photo was taken on Selwyn’s 97th birthday on 7th August 2019 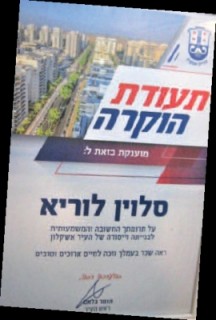 Stop press ... The story of how Selwyn built Ashkelon made the front page of the Natal Mercury in August 1958

I was then appointed to head the third and last phase, from 1955 to 1958, to rectify the financial crisis. We were faced with a huge challenge. Finally, not only was this crisis overcome, but we managed to double the capital development, without further funds from South Africa, by increasing income from restructured investments of the project. We also managed to revert technically to adherence to the Master Plan.

My last task, as a member of a three-man government committee, was to physically transfer to the Government of Israel the Ashkelon project as a gift from South Africa Jewry. This was achieved in three months.

I would like to pay tribute to my wife, Barbara, who gave me so much support in the huge challenge with which I was faced in Ashkelon. Barbara accompanied me in visiting President Ben Zvi and his wife, and I had several meetings with Prime Minister Ben Gurion and Minister of Labor, Golda Myerson (who subsequently changed her name to Golda Meir when she was appointed Foreign Minister), all of whom were very appreciative of South African Jewry's contribution to the State of Israel. 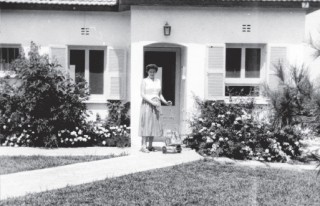 Ashkelon, 1956: Barbara Lurie outside her home at 7 Johannesburg Road, Afridar 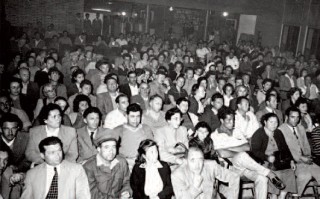 residents of Afridar attending a town hall meeting which was addressed by Selwyn Lurie.

Again, Mazal Tov to you all on Ashkelon's 70th Anniversary. It was indeed a privilege to be part of this wonderful city.