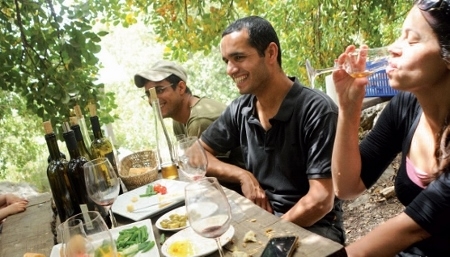 Recently, I sat down with Lior Nachum, the winemaker, and one of the owners of the Gat Shomron Winery. He was in Raanana, my town of residence, providing a tasting during an art show and it seemed fortuitous that I could meet with a winemaker (and taste and discuss his wines) without having to make a trek. Gat Shomron opened its winery doors in 2002, making a modest 2000 bottles, although Lior started making wine in 1998. The winery has grown and is now making about 30,000 bottles in recent vintages, but, what's more impressive, is that they're attracting a cult following.

Lior sources most of grapes from Judea and Samaria (with some grapes also coming from the Galilee and the Judean Hills), and typically wants his wines to portray the terroir. So, he makes almost exclusively single varietal and single vineyard wines, though, on occasion, he has blended vintages of the same varietal if he found them in sync with how they were aging.

Although I had tried several Gat Shomron wines at festivals, I had never had the luxury of sitting with the winemaker with his undivided attention and without the pleasant distractions a festival provides. The first wine we tasted together was their 2008 Gat Shomron Merlot Shiloh (12.8% alcohol) NIS 85 89 points. From Shiloh vineyards, this 100% Merlot is a very low alcohol red for Israel, yet it delivers a generous amount of fruit with notes of sour black cherry, sweet prunes, nutty fruitcake, walnuts, and hints of mocha. This wine comes off as fairly acidic but not unpleasantly so and one that cries out for food to pair it with. It was aged for 30 months in French Radoux barrels with about 35% of the oak being new.

To symbolize how he lets each wine speak for itself in the winery, Lior also crafted a 2008 Gat Shomron Merlot Bracha (14.5%) NIS 95 92 points. This is the kind of Merlot you want to shove in front of someone's face when they try to be dismissive of Merlot. With grapes harvested from the Tura Winery's Bracha vineyards, Lior says the source grapes are exceptional. Most winemakers shy away from them because they seemingly need an unusually long time to develop in the barrel (in this case, 36 months) with additional time in the bottle (about 2 years) before the wine shows its assets most favorably. Lior stresses that the Merlot grapes he sources from vineyards in Bracha are harvested with above average acidity that makes the wine virtually undrinkable when they're young. This acidity serves the wines well as they help the wine age. Additionally, this natural acidity which is challenging for Israeli red wines to deliver with time also come to be part of a very pleasurable and well balanced wine as ripe fruit flavors mature in oak barrels and later in the bottle.

Compared to the Shiloh of the same vintage it, has almost 20% more alcohol and is much denser with deep black fruit on the nose, a perception of sweetness with red cherries, black and red plums, light tobacco, and faint vanilla and their firm, yet integrated tannins in a pleasantly lingering finish seem endemic of Lior's wines. These two Merlots weren't blended because Lior felt like preserving the terroir of each and mostly because they were developing at different paces.

Another Merlot we tasted was their 2006/07 Gat Shomron Bracha (15.2%) NIS 150 91 points. As these wines aged in separate barrels, the 2006 having aged for three years and the 2007 having aged for two years, Lior, at the time, thought that "1+1=3" and that they would be better together and then apart, and being from the same vineyard the voice of the terroir would still carry through. Black raspberries surround black plums and a bit of black tea with chunks of chocolate and wisps of leather. Lior thinks his education at nearby Ariel University as an electrical engineer gave him some insight into how to design this wine outside the box. The price is more a reflection of its rarity (as only a few bottles remain) than being from another series of more recent vintages.

Lest one think this winery is obsessed only with Merlot, I next sampled two Shiraz's. The 2008 Gat Shomron Shiraz (12.9%) NIS 85 88 points might have been more aptly labeled a Syrah. With its relatively low alcohol, earthy notes of forest floor, red raspberry, clove, faint back pepper, and an edge of greenness, it was more reminiscent of a northern Rhone Syrah than an Australian Shiraz. Three out of four barrels of that vintage were from grapes sourced from Shiloh, with one being from the Upper Galilee.

As of 2009, all of the winery's Shiraz is from Shiloh vineyards and the 2009 Gat Shomron Shiraz Shiloh (15.3%) NIS 160 92 points are testaments why. Deep black raspberry, meaty blueberries, black peppers, pomegranate, and wild game open up in the wine that Lior suggests decanting up to 2-3 hours early. He waits until the last possible day to pick these grapes because if he waits any longer, the local wildlife would be beckoned by the vineyards to devour them.

An unusual but pleasant variation on his dry reds was the ̖2010 Gat Shomron Late Harvest Red (15.8%) NIS 150 92 points. With grapes left to dry on the vines until they are more resemble raisins than grapes, this 50% Shiraz, 50% Cabernet is lighter than one might expect from a highly alcoholic late harvest red. It's time in 70% new Radoux French oak married well with the 33 brix grapes that delicately deliver crème de cassis, vanilla, dried cherries, black raspberries, and notes of black pepper with a finish that seems to linger forever. The Cab in this wine shows they have access to Cabernet grapes, and, in fact, their 2009 and 2010 Cabernet Sauvignon wines were being bottled the day of the tasting.

As part of the tasting, I got a sneak preview of their 2010 Gat Shomron Petit Syrah (14.8%) which had just been bottled and was still suffering from bottle shock. While it showed great promise, I look forward to tasting it once it is more settled. Also I had a taste of their 2011 Gat Shomron 24K Iced Wine that is yet unfinished. The 100% Viognier dessert wine has about 230 grams/liter of sugar. Lior wants to add some dry wine to give it a bit more acidity, lower the sugar, resulting in a more balanced treat. They have Gewurztraminer grapes online as well which might mean two dessert wines or a future blend.

One reason I made a point to try Gat Shomron wines with Lior was to acquaint myself thoroughly with wines I had had flirtations with at a few wine festivals. After knowing the wines now more intimately, I look forward to tasting each new wine and vintage and seeing what surprises await me at future festivals, including Israel's largest wine festival in Jerusalem at the Israel Museum this year from August 5th through August 8th.