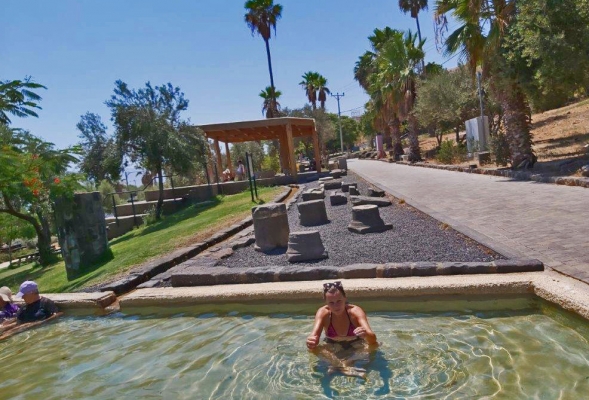 There is something surrealistic about seeing a number of plump, bikini-clad Russian-speaking women sitting in an open-air pool of hot mineral water gurgling up from the depths of the earth, just a few paces away from the remains of some ancient synagogues, a majestic Roman bathhouse and a more than 200-year-old Turkish-built hamam.

Not only that, the aforementioned – and more – can be found at the foot of the Tiberian hillside, upon which sits, a mere few meters away, the impressive white-domed tomb of the revered Rabbi Meir Baal Hanes, or Rabbi Meir the miracle maker. Rabbi Meir was a Jewish sage who lived at the time of the Mishna and is the third most frequently mentioned one of his kind in the Mishnah, his wife Bruriah one of the very few women to be cited in the Gemara.

The Hamat Tverya national park, hugging the roadside just across the way from the shores of Lake Kinneret, on the outskirts of the town of Tiberias in the direction of the Jordan Valley, is relatively small in comparison to most Israel Nature Parks Authority sites. However, it is packed with an array of diverse areas of interest. Within the enclosed park area there is also a magnificent excavated mosaic floor, belonging to one of three synagogues thought to have been built on top of the ruins of its predecessor. In present times, the mosaic wonderworld is protected under a specially constructed building … that is also air conditioned.

Benches are arranged on a higher level, constructed around the extensive mosaic floor. At the press of a button, a huge screen drops down and overhead projectors show a graphically produced informative and entertaining film. The extremely clever graphics include portions where the mosaics themselves seem to come to life at the feet of the viewers.

The first synagogue was founded around 230 CE, with a small piece of mosaic having survived from the synagogue's apparent destruction in the 3rd century CE. However, the second synagogue – also known as the Sela synagogue – was built in the third and fourth centuries CE, the magnificent mosaic floor the earliest to have been discovered so far in Israel. Here one can see inscriptions in both Aramaic and Greek dedicated to the synagogue's donors, and also a host of animals, a spectacular wheel of the zodiac, a holy ark and captivating panels depicting Jewish symbols, such as a seven-branched candelabra, shofar, palm fronds (lulav) and more.

One of the Greek-worded mosaic panels translates as: "May he be remembered for good and for blessing. Profoturos the elder constructed this aisle of the synagogue. Blessing upon him. Amen. Shalom." Another, translated from Aramaic, reads: "May peace be upon anyone who has offered charity in this holy place and anyone who will offer charity may he be blessed."

It is thought that this, the second synagogue, was destroyed in an earthquake at the end of the fourth century, and that the third synagogue, a far more extensive structure with a large hall divided by two rows of columns into three spaces, was built upon its ruins in the fifth century and, with a few changes, continued to function until the eighth century CE.

The healing qualities of the hot springs that emerge from the depths of the earth in this region have been an attraction since ancient times. According to information gained on the site, as early as the thirteenth century BCE, an Egyptian traveler mentions this area of the Sea of Galilee as a "tourist site".

Three outdoor pools, situated on a slope at the foot of the synagogues, are connected by narrow, shallow channels. The water in the first pool, fed by one of 17 highly saline hot springs to be found deep underground (steam from which arises to escape from purpose-built round chimneys within the confines of the park), starts at over 65⁰. Gently flowing through the open channel from the first pool into the second, the water is reduced to 45⁰ and by the time it reaches the bottom of the slope to the smaller pool, it is around 35⁰.

Putting my feet into the middle pool – just a mere 45⁰– elicited expressions better not quoted in this article. I could only stand on the perimeter wall and admire those actually sitting in the water up to their chests … and, amazingly, even smiling.

The excavated, reconstructed 1780 Hamam Suleiman on the site is unparalleled anywhere in Israel. Upon entering the alluring series of stone arched ceilings and wide stone ledges, open channels of water flowing through, one can almost hear the mumbled conversations of those who would have been sitting, perspiring and possibly doing business together all those years ago, whilst the healing waters from underground worked their magic.

Part of the impressive excavated hamam has been set aside as a small museum, where excavated items such as perfume bottles, used by those who took to the waters, can be viewed in display cabinets.

A half hour drive from the Hamat Tverya National Park is yet another fascinating site taken under the wing of and developed for visitors by the Israel Nature Parks Authority, known as the Arbel Park and Nature Reserve.

Unlike the previous site, here one needs a sturdy pair of walking shoes, and not only a head covering but also a head for heights! Standing atop a sheer cliff face, 181 meters above sea level, and looking down is certainly not for the faint-hearted.

This perch on high offers incredible views over Israeli Arab and Jewish communities on the flatlands of the Ginosar valley far below on the one side, and phenomenal vistas over the northern shores of the Sea of Galilee, as well as in the near distance, the Golan Heights and Mt. Hermon.

The Arbel Nature Reserve encompasses an enormous area and includes many species of plants, birds and an abundance of mammals that easily find shelter in the hundreds of rocky nooks, crannies and caves in the region, as well as plentiful water supplies from natural springs and streams.

Arbel has a rich history of battles, some of which are well described by the commander of the Galilee during the Great Revolt, Josephus, who also had the steep caves of Arbel fortified and prepared for Jews as cliff shelters. There is also an ancient synagogue close by, the excavations of which were first undertaken in the early 1900s by pioneering architecture historian and archaeologist, Heinrich Kohl and his fellow German archaeologist colleague, Carl Watzinger. Reconstruction work is still continuing in present times.

This synagogue was mentioned by medieval pilgrims. The traveler Ya'acov ben Netaniel Hacohen described the synagogue's large stone doorway in detail at the end of the 12th century. The doorway has been successfully reconstructed and is still impressive, although standing solitarily under the sky. Another traveler by the name of Shmuel, passing by in 1211, described the synagogue as then being in ruins.

The Jesus Trail, a 65 km hiking and pilgrimage route in the Galilee region, passes just meters away from the synagogue. A large, fenced, wooden platform and seating have been constructed in front of the ancient house of worship, allowing a birds-eye view of the large area of fallen columns, large and small, and the seemingly never-ending scenery, northwards toward Lebanon, and across the Kinneret to Syria.

Close to the Arbel clifftop, a large memorial stone has been dedicated in the name of Zohar Mintz, a soldier who served with the elite IDF commando unit of Egoz. Zohar fell in battle in Lebanon in 1996.

On top of the wooden platform overlooking the synagogue ruins is another memorial stone. This is dedicated, with wording in both Hebrew and English, to Los Angeles born IDF soldier Max Steinberg, who had made aliyah and joined the IDF as a lone soldier, after visiting the country with a group of his American peers touring Israel with Taglit-Birthright. The dedication reads: "Wake up and live" – in memory of Sgt. Max Steinberg who fell in Gaza, July 20th 2014. Dedicated by Taglit-Birthright Israel.

Breathtaking vistas, incredible history and painstaking physical reconstruction for the sake of future generations, coupled with memorials to those who have given their lives defending the country, make an emotional conclusion in present times to yet another excursion to the past.