Grabbing Tiger by The Tail

Although I only play mini-golf, I'm probably Tiger Woods' biggest fan in Israel. Tiger is the world's greatest golfer and has proved it yet again by winning the Masters green jacket tournament for the fifth time, after a painful hiatus of 14 years during which he had to cope with a sea of physical and personal troubles and has just triumphantly overcome them.

It was a match made in Heaven - a golf match between Israel's reclusive champion, Arie "the Lion" Nameri, and the incomparable young phenomenon of the links, Tiger Woods, winner of his last ten major championships in succession.

What had prompted Nameri to issue this improbable and patently hopeless challenge? After all, he was an aging, long-retired player, living on memories and time-dulled trophies, who had last swung a club over twenty years before. True, he had known glory days when winning Israel's national golf championship back in the 1960's, and had even once caddied for the legendary Jack Pikles. But there was nothing in his record to suggest that he could hold a candle to the relentless, remorseless and faultless 24-year-old.

More surprisingly, what had prompted the Tiger to accept the challenge? It couldn't be the prize money - a meager 10,000 shekels. It couldn't be the opponent, or the course, or even Israel's sporting achievements. So what then? No one really knew for sure. There were so-called sports experts who surmised that there had to be some unknown incentive,such as a secret million-dollar clause, that had induced Tiger to cancel his plan to play in the British Open because the dates coincided. Or perhaps it was simply, as a leading football commentator suggested, the mystic lure of the Holy Land.

Whatever the case, as the great day approached, the excitement rose to a fever pitch. Tiger prepared for the event by winning two major tournaments by remarkably wide margins, even breaking the 60's on quite a few occasions. Meanwhile, sports reporters and not a few political commentators laid siege to Arie's modest ground floor apartment to catch a glimpse of him practicing his driving and putting. But the aging idol was never seen to leave his apartment or to wield a golf club, if only in fury at the commotion around his door. There were those, supposedly in the know, who speculated that he practiced at night. Nameri was nevertheless flattered to see his picture appear all over the world next to that of the smiling Tiger.

When he did venture forth, at times when the crowds hoping to be able to catch the Tiger in action around the world thinned, it was to go to a local synagogue and once to visit the famous Kabbalist Rabbi Cadoorie, doubtless, so the experts opined, to receive a blessing for his gold clubs and one of the blessed good luck charms so liberally distributed by the venerable golf-mad sage. Few doubted that Arie would require all the prayers and charms and blessings available to confront the redoubtable Tiger. 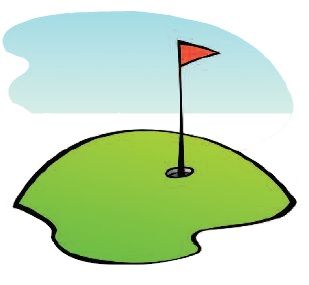 As the great day drew near, the pundits were predictably and crushingly negative about Nameri's chances. The Jerusalem Post's sports editor memorably headlined his article: Lion about to be eaten by tiger! Inevitably, the great day arrived, and with it arrived the young Tiger in his private jet with a vast entourage. He was welcomed on the course by the President and the Prime Minister of Israel and a host of golf-loving Knesset Members, but as yet there was no sign of his challenger. Where was Nameri? Could it be that he had reneged, accepted the inevitable, retired to some godforsaken retreat till the disgrace blew over? Speculation ran riot. But then, in the distance, there came the aging Israeli challenger, trudging along like some doomed Western hero, with a couple of rusting golf clubs perched on his shoulders. His was not the sprightly gait of confidence, nor that of one reliving a glorious past, but more like that of a hopeless prisoner about to be executed.

What was the surprise of the huge throng when Tiger ran over to Arie and embraced him warmly. "The kiss of death" the experts smirked knowingly, for none doubted that the redoubtable Tiger was about to roast his forlorn Israeli challenger alive. But then a strange thing happened. Tiger hit his first shot, a huge 400-yard drive that bounced past the flag and landed in a bunker. Nameri meanwhile drove a 100-yard drive and watched for the inevitable Tiger recovery. But Tiger was having a rough time in the rough. He finished the hole in 10, leaving Arie 3 ahead. Everyone was certain that this was a temporary aberration. Tiger would surely eat up the remaining 17 holes and bury the challenger.

"He probably gave him the first hole out of pity," one expert was heard to remark. But as the pattern repeated itself, people began to mutter among themselves and to wonder if Tiger Woods was sick, or affected by the intense Israel sun, or by something he'd eaten, or even perhaps, if this was not the real Tiger Woods. But that couldn't be because he looked and acted exactly as he was on TV, except that his play was indescribably execrable. His huge drives generally landed far beyond the lush greens, and one even ended up in the sea. Meanwhile Nameri was winning hole after hole with an average of 6 or 7 shots per hole. Tiger, fine sportsman that he was, took it all with a gracious smile, and after taking 15 on the tricky 200-yard 16th, looked ready to concede defeat in what became known as the biggest sporting upset of the millennium. Tiger did show a flash of his true form by holing the 18th in 1 for a total round of 143, possibly the poorest ever round by a golfer of any description. Nameri finished with a creditable 94, not quite like his championship-winning, but enough to deflate the Tiger.

After such a roasting, one would have expected the Tiger to slink away, avoiding journalists and autograph hunters, to the cell-like monastic safety of his private jet. But to everyone's surprise he did no such thing. Instead, he raced over to Arie and grabbed him in a vice-like embrace which lasted a full two minutes. Policemen looked on nervously, unsure whether to intervene and rescue Arie. But then Arie did the same, hugging Tiger with tremendous passion.

The disappointed crowds who had come to see the Tiger triumph, began to drift away after seeing another much-hyped sports legend bite the dust. The sports journalists were preparing their front-page headlines: "Israeli Lion Thrashes Tiger" or "Tiger is a golfing mouse!" A while later, as the two men finished embracing, a curious radio reporter who had remained behind approached Tiger Woods and asked: "Tiger what happened to you today? How did Nameri beat you so easily?" To which Tiger replied: "I wasn't going to beat my future father-in-law first time round was I? And besides, he needs the prize money more than me." Incidentally, the following week Tiger Woods won the Japanese Open by a record 30-stroke margin!