Golden Age is Killing Me 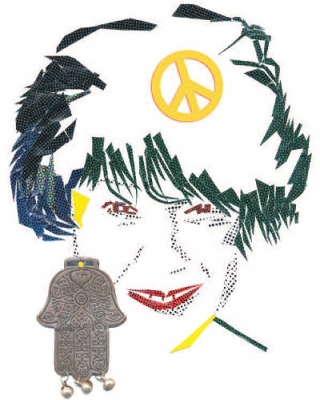 Every time she mentions the name of her new story to people, there is a burst of laughter, which is immediately replaced by a serious look; it's a perfect conversation stopper for everybody. It sounds wonderfully funny when one hears it, but when it sinks in, everybody realizes that it is really not funny at all. It is sad, it is painful. It's depressing. What is funny about old age?

They have all landed in that "funny" golden age state. All her friends are getting old. If one's mind works, one's body gives way to pain and mostly disaster. Nobody FEELS old; how could they go on with everyday life if they did? It's a state of mind, one tells the other. The mirror in the morning lies. The photographs one sees of oneself are out of focus, badly taken. Speaking to her cousin the other day, she said with a sigh: "I just hate to look into the mirror lately."

"Have you gone utterly mad?" demanded her cousin? "At our age, one does not look into the mirror!"

"You look great," she is told by friends. "Last time we saw you, you didn't look so well." "Last time" she was told the very same thing. But it works. One loves to deceive and be deceived.

They somehow slipped into that "golden age" and arrived one day quite surprised. He ignores it completely, pushes it away and goes along believing that he can still move mountains. She is having a rough time; she cannot comprehend how she ever got there so fast. She does not remember her 30th birthday. Did anybody really celebrate her 40th? Why are "zero-birthdays" so important and celebrated? When she hit 50, it was a joke. She could not possibly be half a century old! She laughed it off and continued believing that her dreams were still ahead of her. When suddenly her 60th rolled around, she went into a complete depression; she knew life was over. Those dreams she thought she could still reach. She thought she had so much more time to do things later. Later? When? The time was gone, she knew there was no "later"; things were breaking down. Her mind was slowing down. She felt that life had escaped her and didn't give her the chance to do… what? She did "do" so much! But there was this feeling that more could have been achieved and now no longer could be. Life no longer would go up, it would only go down. And in a great rush at that.

When 70 barged in without permission, she was no longer depressed; she knew what she could do and what she would do. She knew who she was and what IT was all about. Yes, she did celebrate that birthday. She wanted to and did it "her way".(She loves that Sinatra song.) And somehow, without a by-your-leave, she woke up after that wonderful celebration and there it was: the golden age. No, definitely not old age; that she could not deal with and she refused to feel old. So: golden age? Why is it called that? Is that what she was feeling at 60? There is absolutely nothing golden about it. Her mother used to say: I am rusting all over, where is the gold? She agrees. Her body refuses to obey her; her legs have given up their servitude. A dedicated walker, she can no longer walk. Her mind? If it's well watered by gin or whiskey, it works quite well, thank you.

The disintegration of her body, she is convinced, is due to the "stay" in a monastery, when she was a child, compliments of WW2. The cold, the wet, the lack of food… She never thought that it would affect her body; she was sure that her mind would go first. But it did, and the outcome is here today in her golden age.

Their son was visiting them recently and out of the blue asked them if they would be all right. All right? They were a bit mystified. What could their child mean by that? But all this middle-aged man wanted to know was if his aged parents were going to be able to cope and have enough to live on. They thanked him profusely, assured him that they would be fine and went into total shock. The tables had turned. What is golden about that?

They are very good about medical check-ups. Once a year, off they go to their "local"; every year more blood is taken from their arms, because more tests are needed.

"Hold your arm straight UP," says one expert. Another says: "Hold that cotton swab right there for four minutes." He does one, she the other. Both systems work. Or they do not. She is convinced it depends on the technician's good night or bad. How marvelous to come to work and be able to get rid of all nightly frustrations by jabbing some fifty-odd arms in the morning with a rather large needle and draw blood legally!

She remembers the oath she took after the war. She would never be hungry again. But in their so-called golden age, when she thought that they would just indulge in all the lovely foods she kept away because one must keep the figure and must eat the right foods for health reasons, she is on a strict diet and can eat only certain foods. And very few at that.

She loves food. Anything to do with food is great. She loves to cook and to feed people. And to write about food. She is The Wacky Cook and loves it.

When somebody told her one day that they did not like bread, she was flabbergasted. she was ready to kill.How can one even admit to that, she wanted to know?

Sitting in the dentist's chair the other day, waiting to try on her new bridge, the dentist told her that the bottom part of the bridge is made of gold. Through the cotton and all the junk in her mouth, she started to splutter. Quickly, her mouth was emptied and the worried dentist asked her: "What is the trouble?"

"Trouble?" she shot back at him. "That's it!You've just given me the answer. I have found the gold in that stupid golden age they are all insisting I am in..."

Debbie Morgenstern is The Wacky Cook of the internet. She is also the author of"My Life in Israel and other short stories".