Germany of My Past 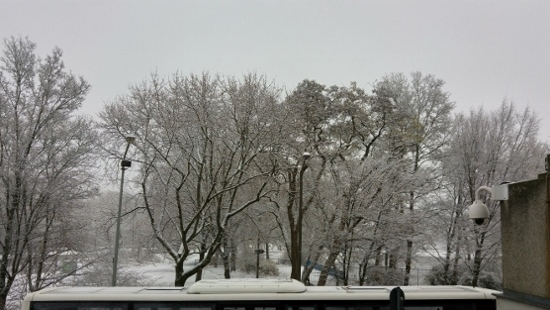 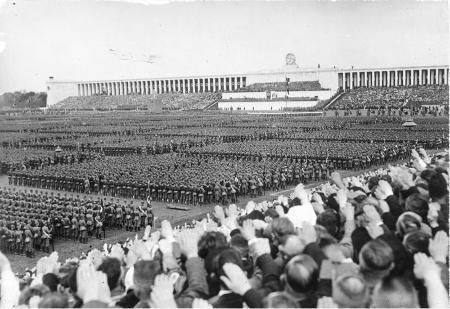 My 17-year-old grandson Daniel and I recently returned from a most pleasant, interesting and emotion-filled trip to Germany.

Throughout the years, I have taken each of my grandchildren on a trip out of Israel. Daniel is the sixth and the youngest, and it was now his turn.

We began with a flight to Nuernberg so that I could show Daniel where his Oma (grandmother) was born.

We arrived on a Wednesday afternoon, were met by friends, settled into our comfortable accommodations and immediately began exploring the Altstadt – the old city which is completely surrounded by thick, high walls.

With the help of one of my friends who is an excellent guide, we visited the beautiful library, particularly the children's section where we saw books in every conceivable language for the children who have come with their families to Nuernberg from every conceivable country; from there we had an excellent view of the castle which is situated on a hill overlooking the whole city and from which I used to go sledding as a child. 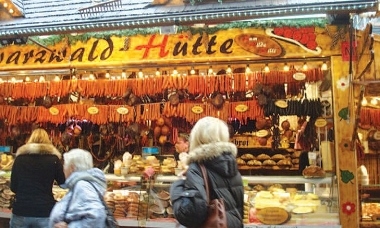 The bright lights of the Nuernberg's Christmas market

She took us to the "Henkerhaus" – the Hangman's Residence Museum which is located directly above the river. From the daily log book kept by the most famous hangman, Franz Schmidt, one gets an idea of the city's criminal history in the 1600's.

­I was particularly eager for Daniel to see "die Strasse der Menschenrechte" – the street of Human Rights which was created by Israeli artist, Dani Karavan and which was opened on the 24th of October 1993.

This very impressive sculpture consists of 27 columns, an oak tree in the shape of a column and 2 plaques. On each sculpture is inscribed one of the Rights to which every individual should be entitled, each in a different language as well as in German, (e.g. Equality before the Law; the Right to Life, Freedom and Security; the Right of Citizenship, etc.)

The sculpture is part of Nuernberg's efforts to shake off its vehemently Nazi past and its reputation as the City of the Party Rallies and to become instead the City of Peace and Human Rights.

We spent a good bit of time at the Christkindelmarkt – the yearly Christmas market which is one of the largest in the country and which was opening just at the time of our arrival.

Here one can find Nuernberger specialties not readily available elsewhere such as "Bratwuerstle" – little pork sausages, wooden toys, the very delicious "Lebkuchen" – a gingerbread cookie for which Nuernberg has been famous for over 400 years, the equally well known "Gluehwein" – spiced mulled wine which is a favorite drink on cold winter days, as well as other interesting food, clothing and leather items. 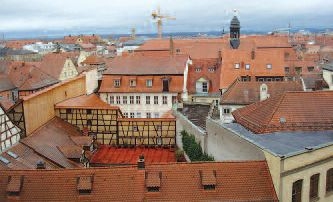 A real highlight of the trip was finally meeting a man with whom I had until then been only in email contact. He is the grandson of my father's non-Jewish business partner in Nuernberg.

The two men met while working together in the same book printing firm in the early 1920's. They got along so well with one another that they soon decided to leave and form their own book printing firm. The partner was a very special person who, together with his wife and daughter, became like members of our family.

As the Nazi might became stronger and their intentions toward the Jews became more and more obvious, he strongly advised my father to, as he put it, "hau ab", which loosely translates as "get the hell out of here while you still can". This, thank G-d, we were still able to do.

The partnership continued harmoniously until our departure in August 1938 and our communication continued until the death of the partner. It has now been renewed since the grandson and I have found one another, thanks to an interview written about me in a local newspaper on a previous visit which his wife happened to read.

Two days after our arrival, Daniel and I made our way to the dock where we were heartily welcomed aboard the beautiful ship, the Viking Gefjon, which would be our home for the next week. The ship remained docked for two days to enable the passengers who had just arrived in Nuernberg an opportunity to explore the city and to enjoy the Christmas market.

For those who were interested, there was a very special World War II guided tour of the Documentation Center located on what had been the huge Nazi Party Rally Grounds, large enough to accommodate thousands of cheering Germans who listened mesmerized to Hitler's speeches. 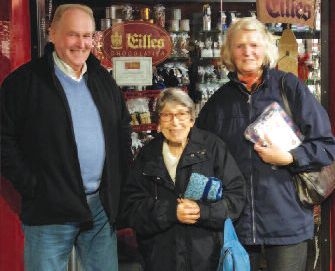 Inge David with Dieter Haspal, the grandson of her father’s business partner, and his wife, also called Inge

The Center chronicles the origin, the causes and the manipulative nature of the Nazi propaganda machine. It focuses on the very beginning of the rise of Hitler, the laws against the Jews starting in the early 1930's, the rise of Julius Streicher, the publisher of the fiercely anti-semitic newspaper, "der Stuermer" as well as many interesting exhibitions.

From there we were taken to the Palace of Justice – the Courthouse. Our guide took us to Room 600, the room in which the Nazi War Crimes Trials were held, and told us all about their proceedings and about the underground passages to the adjacent building where the prisoners were held making it impossible for them to escape or be kidnapped.

It is one thing to read about this; but, one gets a very different feeling when one is actually sitting in the very place where it all happened.

Saturday evening, with all passengers back on board, we began our Rhine River cruise arriving the next morning in the city of Bamberg. Here, in addition to enjoying another Christmas market, we were taken to a restaurant for a Franconian Beer tasting which we all enjoyed.

The following days brought us to Wuerzburg, Rothenburg, Wertheim, Heidelberg and Frankfurt. In each city we were met at the ship by knowledgeable local guides [Y1] who shared much information particularly about the older parts of the city; in many cases there had been considerable damage during the war and it all had to be rebuilt.

Wertheim, which is located on the banks of the Main and Tauber rivers, has endured hundreds of years of flooding; we saw numerous houses showing the dates and height of the flood waters during the centuries.

In front of one house we saw 6 brass plates (Stolpersteine) embedded in the sidewalk; on them were engraved the names of the 6 members of the family who had lived there, as well as information about their deportation to a concentration camp and subsequent murder. I had read about these brass plates but had never seen them. It is a fitting memorial to Holocaust victims.

We also saw a sign on the wall of a building showing where a synagogue had once stood. A different guide took us on a tour of a very old Jewish cemetery. He was an exceptional guide who began by introducing himself (Rudi) and then told us his own personal history.

He was, he said, the grandson of a high ranking Nazi officer. The grandfather died shortly before he was born; eager to learn something about his Opa (grandfather) other than the fact that he had been imprisoned by the Russians after the war for five years, he looked for and found an old comrade.

When he heard the grandfather's name, this old Nazi came to attention with a Heil Hitler salute and proceeded to tell Rudi very proudly all about his grandfather's evil activities during the war.

When he confronted his mother with this information she denied it and said it was all propaganda; however, as a young teenager in the early 1990's, his school teacher took his class of boys and girls to Poland – to the concentration camps – to see for themselves the terrible devastation and annihilation of the Jews.

This experience, he said, changed him forever; with the help of books and documentaries he was finally able to convince his mother of the truth.

He quoted Elie Wiesel to us in stating that the crimes of the past generations were NOT his responsibility; rather it WAS his responsibility to make sure that it will never happen again. This he has made his mission and he tells his story to all the groups he guides. 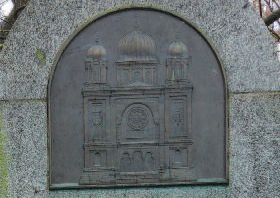 From the city he took us to the old cemetery where we saw a number of very old gravestones, some with small stones on top showing that they have been visited. (I also placed a stone on several graves.)

The inscriptions are now very difficult to read and experts from Israel have come to the cemetery to work on deciphering what is written on the gravestones.

Our cruise ended in Frankfurt and here we had our choice of a guided walk into the city or a full day's bus trip to Heidelberg. Daniel and I opted to stay in town; I joined the guided city tour and enjoyed yet another Christmas market, while Daniel was invited by some of the crew with whom he had become very friendly, to join them on a shopping spree.

The crew members represented a veritable UN coming from all over the world and speaking many languages; but unlike the real UN, they all got along and worked beautifully together. One could feel the sense of harmony among them. 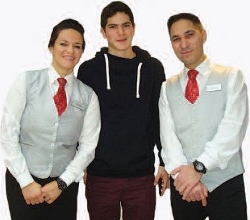 Daniel on the Rhine cruise

I believe that Daniel and I were the only Jews on board but it did not matter at all; everyone was very friendly and Daniel, easily the youngest on the ship, charmed them all.

Many of the people asked him about school, about going into the army, about life in Israel and, in fact, a number of them had visited Israel.

It was truly an excellent trip for both of us; we had a grand time despite the cold and rain; we saw and learned much and, being on a cruise, of course, ate all too well. We had a good flight home and returned with many happy memories.