German Memorial to My Grandparents

Just over a year ago, I received a letter from someone in the Jewish community in Leicester, England, where I had lived from birth to the age of 27 when I moved to Israel. It said that someone from The 12 Apostles, a parish church in Berlin, was searching for me. They provided a name and address, and it all started from there…

I soon discovered that several years ago, a woman in Berlin named Renate Gaedicke had decided that she wanted a memorial stone laid for my maternal grandparents, who had been murdered in the Holocaust in the concentration camps. When Renate was 9 years old and living in her family flat at 16 Nollendorfstrasse in Berlin, she befriended an elderly (in her eyes) Jewish couple who lived in the adjacent apartment. In 1942, Julius and Elfriede Berg were taken away by the Nazis and never seen again. They were my grandparents, who like many others, just before the war started had sent their only child (Margaret, my late mother) via the Kindertransport to England, where she survived the war.

The memorial stones unveiled to the Bergs in Berlin

Members of the local Berlin parish church agreed to help Renate with laying the memorial stones in the memory of Julius and Elfriede Berg. First, they approached the German artist Gunter Demnig, who designed the Stolperstein memorial brass plaques for Holocaust victims. They needed either to obtain the agreement of a family member or to prove that there were no surviving relatives.

They formed a committee to contact the relevant authorities both for permission to lay the plaques and to search for any living relatives. Via the German government archives, they traced my family to Leicester, England, at our last known address. The most up-to-date information at the UK Population Records Office was my name and that last known UK address. Letters there of course all came back unanswered. At this dead-end, they almost gave up. As a last resort, they wrote to someone in the Leicester Jewish community, who just happened to know that I had moved to Israel in 1975. After making a few enquiries to find my new name and address in Israel, I was at last alerted to the fact that a church group in Berlin had been searching for me and I was encouraged to make contact.

It had taken Renate's committee two years to find me. With the help of email and an English translator from the church, things started to move forward and I gave my agreement for the plaques to be laid. After many more letters, questions and answers, finally a date was fixed for the ceremony, which was coordinated with the artist, museum and local authority. I provided a photo of my grandparents from around 1938, which was included in their flyers and magazine. The whole process had taken three years. 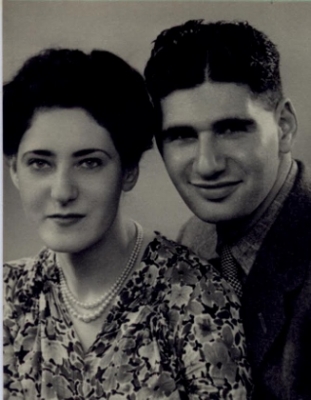 I made a special trip with my cousin to Berlin for the ceremony, and was gratified by the very great effort made by the church committee members during our visit. The ceremony took place on Friday September 25, 2015 at 9.15 am, in the street by number 16 Nollendorfstrasse, Berlin. This had been my grandparents' last address before they were deported to a concentration camp in Poland. Many members of the church attended, as well as residents from number 16 and passers-by.

The ceremony was well-prepared and conducted. It included speeches in German by those involved in the project, short pieces of classical oboe music performed by a young church member and the laying of flowers. I recited Kaddish in Hebrew and the pastor read it in German. I also spoke briefly in English about my family and thanked all those involved in this memorial project. Finally, my cousin read in German some lines from the last postcard my grandparents ever sent, mailed the day before their deportation. It had been intended for my mother but they could not send letters to England as the two countries were at war, so the card was sent to my cousin's mother in Switzerland. It eventually came to me some 30 years ago.

The circle had now very nearly been closed – but not quite. Renate, who is well into her 80s, called me over. With my cousin's interpreting, Renate shared one final part of her story.

Some months after my grandparents had been deported, during an air-raid on Berlin, a bomb destroyed half the building at 16 Nollendorfstrasse, including the part where my grandparents had lived. A few weeks later, while the young Renate was playing in the rubble, she stumbled on a small silver dish. She showed it to her parents and asked if they knew to whom it belonged. Her parents said that it must have belonged to Julius and Elfriede, as they recalled seeing such items in their flat. Renate then saved the dish for 72 long years, in the hope of one day being able to return it. When she found out that I would be attending the ceremony for laying the Stolperstein plaques, she carefully polished the dish. She was thrilled finally to be able to hand it to a family member!

Ralph Alon is from Moshav May Ami, Israel and is the grandson of Julius and Elfriede Berg.