From India with Love 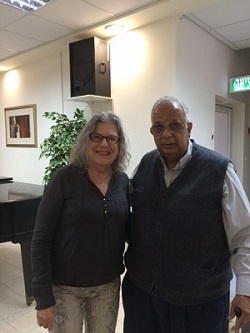 Nissim Moses came to introduce us to the Customs and Holiday Celebrations of the Bene Israel (Indians of Jewish descent) and in introducing him, Janet Keisari observed that "Today is the one and only time that our guest actually became the host!" As food is such an important part of Jewish holiday traditions, and the Bene Israel are no different in this, Nissim shared their traditions by generously providing a Taste of India, authentic traditional holiday foods catered by his favorite establishment in Ramle with the addition of Charoseth for the Pesach seder, which was prepared by Molly David the caregiver who assists him. This was only the first of many surprises Nissim had in store for us. 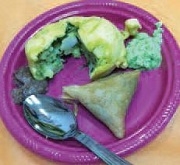 A taste of the East

Nissim has researched the history of the Bene Israel, which began with survivors of a shipwreck (about 2,300 years ago) of seven men and seven women. He links the sea-faring group with the Levites (priestly cast) living in the tribal region of the sea-faring tribe of Zebulon, who were settled in the north in the vicinity of what is now Haifa. DNA research results have confirmed the genetic connection of the Bene Israel to the tribe of Levy. His research revealed that a thriving trade existed following direct routes in the open sea between India and the Mid-East, in the era preceding the destruction of the Temple, at the time when the Greeks still controlled the area outside of Jerusalem. Unlike the general practice in India, where the dead are cremated, the remains of burial sites of these early Jewish settlements (starting from Nowgaon the first cemetery) on the Indian coast show they followed the Jewish tradition in burying the dead, always in an East-West orientation.

The lecture was illustrated with photos showing the design and symbolism in the menorah of the synagogue, the Succah, sets of Shabbat and Chanukah oil-burning lights, the two-handled Pesach seder ceremonial platter, and examples of festival tables, including Shabbat.

According to Nissim, Jewish Indian traditions do not place women in a segregated role religiously, and as an example he cited the inclusion of a torah-reading function even in the women's balcony of the synagogues of the Jews of Cochin (both of the Malabari and the Pardesi Jewish Communities of Cochin) . Carrying it a step further, he humorously noted that the education of the grooms directs them that in the home, the wife rules! The custom of applying henna to the palms is so that as long as the saffron-red color persists, the newlywed bride is excluded from housework, and is to enjoy the new life and get about the main aim, to start a family. He observed that India is the only country where the Jewish population did not suffer persecution. The name Bene Israel was adopted to establish the connection to Moses, whose followers had a protected status in the Muslim ruled regions and states of India.. On their part, their diet reflected sensitivity to the local population, in that no beef is consumed or was ever consumed by the Bene Israel in their 2,000 year sojourn in India.

For me, this was a rare opportunity to greet an old friend. My own acquaintance with Nissim Moses began in 1985, when my family and I were new immigrants and I began working at Israel Aircraft, first at Lod and later at Elta. He was the founder of the Acoustic Department, in close proximity to the branch where I was, Ground Testing. In addition, Nissim was the engineers' representative on the Workers Committee. He was bold in defending legal contractual rights of employees and likewise, in opposing abuse of power by the workers committee. Thank you, Nissim Moses, and may you be blessed with good health and success in every endeavor!