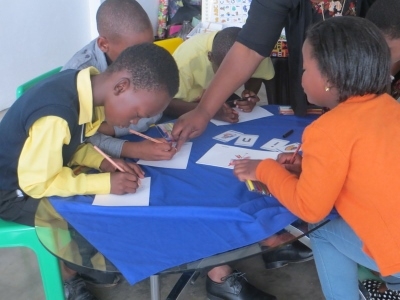 Learning to read is fun

"Passing on the knowledge I've gained over many years of teaching is number one on my bucket list," says Estelle Treiwis, a remedial teacher from Raanana. She is now well on her way to achieving that, with "Linkit to Read", a reading kit she has devised for teaching English, on which she holds a world patent for its unique methodology.

Estelle was born and educated in South Africa, but has been living in Israel for the last 47 years. Her experience is impressive: she studied education, art, art therapy and remedial teaching and is a skilled artist as well as a warm and enthusiastic teacher. Over the years she found that the best way for children to learn to read was through playing games, and she has always incorporated games, the majority of which she invented herself, in her teaching. That led her to develop a complete system to teach reading. "Eventually," she says, "it all came together." 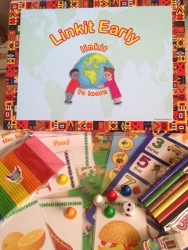 "Linkit" is as impressive for its graphics (which Estelle designed) as for its contents. The brightly decorated kit contains everything one would need to teach and learn English: packets of flashcards, each of which can be used in six or seven games, board games, laminated worksheets, even felt pens, crayons and plasticine to form letters.

So what makes Linkit different from other methods? Estelle has focused on words that are more or less the same in the child's home language and in English and uses them as a springboard to learn letter sounds. In Hebrew, for example, such words might include elephant, banana, television, milkshake, guitar, gorilla and so on. The alphabet code is learned simply and effectively by the letter shapes being drawn or formed with plasticine.

"The association is amazing," Estelle says. "They remember the letters from their drawings, and in just a few lessons they are reading words and then stories. The illustrated story book has a new story with the introduction of each new letter, so the child is able in a very short time to 'read for meaning' - the primary objective of any reading program.

Although the kit is meant to be used by teachers, it can also be used as a technique by parents who want to help their children with English reading.

So far, the kit has been introduced into South Africa with great success using words from Zulu, Xhosa and Sotho as the basis. Estelle herself taught children "under a tree in a squatters' camp" and has trained a number of teachers there in her method. A South African company is now in the process of producing it for the local market. There has also been interest from teachers who want to use her system in neighboring countries. Another version, "Linkit Early" is intended for pre-schoolers.

In Israel, the kit hasn't been produced yet, but that is definitely on the "bucket list" as well.

Estelle's family is very supportive of her efforts to combat illiteracy. "They see that you can make a difference. I really believe that; otherwise I wouldn't be doing this."