ESRA Hike was Quite a Feat 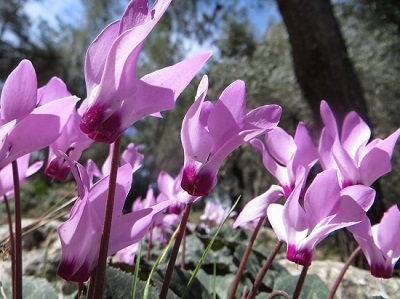 Dawn was breaking. It looked as if it was going to be a beautiful day. Actually, it was already a beautiful day but at six in the morning who is in a mood to appreciate that fact? As usual, I was asking myself, why oh why was I putting myself through this? The only small comfort was that other poor souls living further south had already been up for ages as they had to be at their pick-up point almost a full hour before I did.

Yes, it was time for another ESRA hike. Nearing the end of the last hike that I was on, as I clung to a ladder which had been hammered into the almost vertical wall of a crater, I distinctly remember saying, never again. And yet, here I was preparing for another.

So what makes an ESRA hike so special? Well, first and foremost, there's the people. In some ways we are a motley crew, different accents, different backgrounds, different ages though most are in the later stages of life, definitely different levels of fitness and enthusiasm for the effort involved, but all united in our love of our beautiful little country and our desire to see it from close up.

Then there is our guide Reuven, supremely fit although I would guess he is well up there in the higher age bracket. Always cheerful, always raring to go, and exuding quiet confidence that we will all cope splendidly with any obstacle nature puts in our way and that we will enjoy every minute, no matter how tough the going gets or how great the challenge.

From my point of view, it was good that this hike was classed as "moderate" rather than the crater one which was, I felt, a tad under-classed as "moderate to hard". I had assumed that this was a classification which put the hike somewhere in the middle of those two descriptions. It had in fact meant that some sections would indeed be moderate. Another section would be, in my opinion, death-defying. (There were only two things that got me through that part of the hike. One was that turning round and going back was an even worse option. And the other was the knowledge that the octogenarian of the group was way ahead of me, and was in fact already seated at the top of the crater relaxing and enjoying the stunning view.)

This time we were heading for the Golan Heights and knowing that, in spite of the name, once you are on the top, the Heights are in fact plateaux, I looked forward to a more gentle hike along the summit with magnificent views and the joy of Israel's glorious wild spring flowers to cheer us on our way.

I should have known better. That sort of hike would have been labelled "easy, for softies". Apparently once we had enjoyed a gentle stroll along the summit we would be beginning our descent, our final destination being the memorial to two Turkish airmen, which I clearly remembered as being not far from the shore of the Kinneret, way, way below us.

We began our hike not far from Mevo Hama, the second kibbutz to be founded on the Golan Heights, and sure enough the flowers were everywhere. Attesting to the cooler weather up here, delicate cyclamen and red anemones were still adorning the landscape and the red buttercup was just making its appearance. (Down in the Sharon area these two had all but disappeared and the third of the "red wave", the poppy, was well under way.)

Great excitement was felt by all when someone discovered another beautiful red specimen. This time it was a tulip, blooming in isolated splendor. 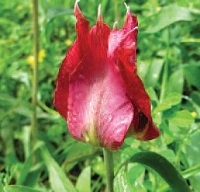 Dotting the cliff top were white broom bushes in full bloom. Their tiny white flowers splashed with pink are easily missed but a close inspection reveals their beauty.

Other plants found in abundance were the euphorbia and the thorny burnet whose rounded cushion-like shape attests to the colder harsher climate up here, where plants that have evolved to remain undamaged in high winds do best.

We came across a pill-box which jutted over the drop down to the Kinneret below and it was easy to imagine how easy it was for the Syrian soldiers based on the Golan to shoot down on the kibbutz farmers below as they cultivated their fields, or on the kibbutz children who were forced for so many long nights to sleep in shelters instead of the comfort of their own beds. Springs of clear water dammed to make small pools allowed the Syrians to enjoy the pleasures of bathing when the weather was hot.

Reuven reminded us of the incredible story of Eli Cohen,"Our man in Damascus", and how thanks to him we were able to spot where the Syrian bunkers were placed. The results of his suggestion to provide shade by planting eucalyptus trees (which effectively pinpointed every Syrian outpost) can still be seen today, where the alien eucalyptus dots the slopes; defying by their presence the naysayers who claim this story is a myth.

We began our descent of the mountain. Walking down proved to be relatively easy as we found ourselves on an asphalt path. Knowing how some members of the group love the thrill of a challenge, I could only be grateful for the previous incumbents of the Golan Heights. Thanks to their habit of planting mines (where we who truly love the land have planted vines) it is forbidden to go off the paths. Otherwise, I am sure Reuven would have had us clambering down some rocky ravine or other.

For once, we were able to enjoy the view rather than concentrate on the rocks beneath our feet. And what a view it was.

Even with a haze we could see the Kinneret stretching below with waves rippling the surface to give different shades of blue, the kibbutzim nestling around its shores and in the far distance Tiberias spreading out and up over the opposite hills. Beyond, the summit of Mount Tabor could just be seen.

Great excitement again as a large purple iris was spotted, and then another and another. This variety was large and impressive, possibly the Judean iris which also grows further south, and is even found in the Northern Negev. There are numerous species of iris in Israel so we could be forgiven for our uncertainty as to which one this was, even with the flower guide that one of the hikers had thoughtfully brought.

Another find was the relatively rare yellow asphodel, its white relative being far more common at this time of year.

By this time, we had moved off the asphalt on to a dirt track, dotted with rocks, and there was as usual a wide difference between the first and last hikers. I, of course, was bringing up the rear whilst some of the stalwarts were a mere dot on the horizon. But no-one need feel any pressure on an ESRA hike as each finds their own pace, knowing that the front-runners will stop every so often to allow the less driven hikers to catch up and catch their breath.

Lunch was taken in a delightfully shady spot reached by a detour that included crossing a grassy slope full of the tiny purple "afternoon" iris because it only opens in the – well, I guess you can work that one out for yourselves!

We sat under the shade of pomegranate and eucalyptus trees, whilst a flowering almond showed off its delicate beauty. Running water and a man-made swimming pool completed the picture. No-one took the opportunity to dive in but clearly, judging by the raucous noise, it was a popular spot for the local amphibians.

I took advantage of this stop to quietly attend to excruciatingly painful toes. Thanks to new boots, one foot was doing splendidly, the other less so. Another intrepid hiker had taken a tumble earlier and was bravely soldiering on with one knee swathed in bandages so who was I to make a fuss?

Before I knew it, I was surrounded by sympathetic and helpful fellow hikers. Unguents, plasters and advice; all were offered and gratefully received. As I said at the beginning, it is the people who make an ESRA hike special. (Thanks for asking. My foot should be fully recovered in about another week.)

The last leg of our journey (no pun intended, though I was certainly on mine) brought us down to a monument unusual in Israel. It was erected by the Turks in commemoration of two unfortunate pilots who crashed here in 1914. Forgotten for many years, Yerach Paran, a member of Kibbutz Haon, took an interest and now thanks to him the monument has further adornments, including the gardens that surround it, with trees planted and nurtured by him. Also due to Paran's efforts, two eagles - symbols of the Turkish Air Force - carved in stone stand proudly by the obelisk, having been donated by Turkey in 2001. *

It was, to be honest, with no small relief that I boarded the bus that was waiting to bring us home.

Whilst my foot and head say, never again, my heart and soul say, I'll be back!

* For the full and fascinating story of the Turkish pilots, check out this link http://www.hadassahmagazine.org/2014/03/17/letter-kibbutz-haon-fallen-flyers/