Our Friend, Our Philanthropist 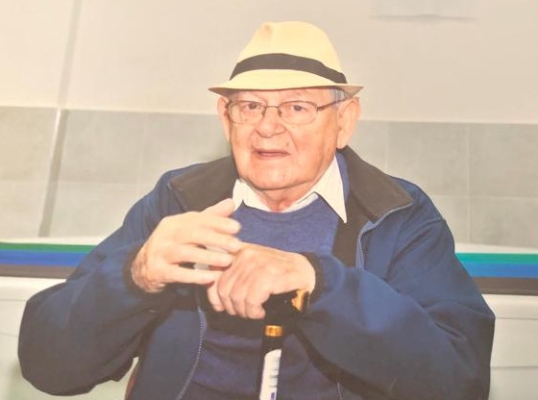 On November 14, 2021, ESRA lost a dear friend, David Klein. A Holocaust survivor, art dealer, Zionist and philanthropist, David was born in Transylvania in 1928. This non-assuming man with a quick wit, engaging smile and Hungarian accent was anything but ordinary. His life journey would take him back and forth across continents and in and out of the homes of some of the most serious art collectors in the world. But most importantly, he made dreams come true for hundreds of Israeli students.

David's journey into the world of art began as a young boy when his family rented out a shed in the back of their home to local artists to use as an art studio. The young David would run errands for the artists and occasionally even serve as artist's model. Unfortunately, like most of Transylvanian Jewry, many of those artists did not survive, but David's passion for art did. After WWII as a young immigrant to America and later while in Paris, David immersed himself in the world of art, visiting all the major museums and art galleries in America and in Europe. His passion became his vocation. On one of his trips to Paris, he became acquainted with the artist Eduouard Cortes and became his agent, propelling Cortes to fame in the art world and launching his own career as an art dealer. David brought beauty into the homes of art lovers and collectors. His success can be attributed to his quiet manner and vast knowledge about art which earned him a well-deserved reputation for honesty and integrity.

David didn't pause there. He generously donated to many worthy causes. When he finally retired to Israel he became aware of ESRA and all the work that they do through the welfare committee as well as programs that help students realize their potential. He found out that there were many students who wanted to complete their studies but due to financial difficulties were unable to do so. Without hesitation and guided by Michael and Adele Hunter he established the Leah Klein Scholarship Fund in 2007, named after his mother. Since then, hundreds of deserving students whose dreams of achieving higher education would have been difficult if not impossible benefited from David's generosity.

Every month David met with representatives of the Welfare Committee and interviewed those students who were handpicked by the committee to meet him in person prior to receiving a scholarship. He loved hearing their stories and their aspirations for the future. The students he met represented a microcosm of Israeli society: they were religious and secular, native Israelis as well as the children of immigrants or new immigrants themselves. They came from Ethiopia, South America, the United States, France, the UK and even Siberia. All the recipients completed the Army or National Service–Sherut Leumi - that was a prerequisite set down by David who was so proud of the Israeli Army. Most of them were the first in their families to receive a higher education.

In 2016 David was honored by ESRA for his establishment of the scholarship fund. Among those who came to pay him honor were many of the students whom he helped. One of them was a young architect who was able to complete her studies and another was a one-time runaway who after achieving her degree went on to help teenagers at risk.

Those of us who were lucky enough to have met David were touched by his humbleness and generosity. He took pride in every student that he helped and they in turn promised to help others. Those that benefited are now lawyers, doctors, physiotherapists, social workers and computer programmers, just to name a few. David taught all of those around him the true meaning of tzedaka – enabling others to help themselves.

Yichi Zichron Baruch. May his memory be a blessing.