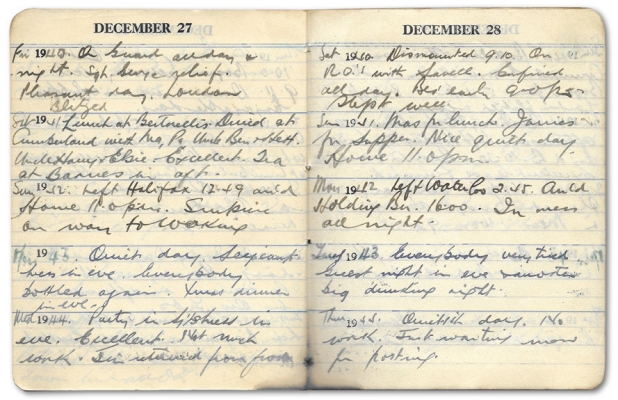 The story of my father's Second World War diaries started after his death on August 5, 2004, and I went to London for his funeral. While looking in his bedside table drawer, I found a bag containing his war medals and also two volumes of brown leather bound "Five Year Diaries".

On looking through these two volumes I realized that I had never seen them before, nor had he discussed them with me. Being the eldest of his four sons and the only one born during the war, I found this rather surprising.

The diaries documented his wartime experience for the period from his enlistment in the British Army on July 24, 1940, to April 13, 1946, when he was granted 95 days leave and was effectively released from military duty, which formally took place on July 17, 1946.

With the consent of my brothers, I brought these diaries back to Israel. I occasionally read some of the entries, but it was difficult to follow his handwriting.

I was encouraged to have these diaries transcribed and was lucky to find someone recently to do this difficult task. She is a young British historian who, at her initiative, has added significant historical value so that anyone reading the diaries will hopefully understand what was going on in Europe and what life was like at the time.

During this period of active service of nearly five and three-quarter years (2089 days), Dad kept a diary, never missing a day. Some entries were very brief and others more detailed, and they were recorded in two diary volumes which contained five entry places on each page for each day of five years. As the period covered was more than five years, two volumes of diaries were required. 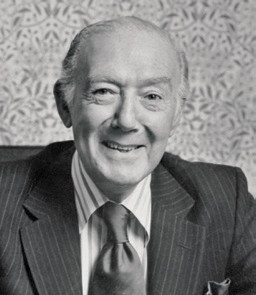 David Isidore Lavender was born on January 19, 1914, shortly before the outbreak of World War One. He was a Captain in the Royal Army Service Corps (RASC) and after spending a long period of training from July 1940 to January 1943 in various places in the UK (including Belfast, Bristol, Halifax, Guildford and Woking), was sent to Europe with his unit on January 4, 1943. This happened a few months after I was born in October 1942.

He then proceeded to spend the rest of his army service of three years and five months overseas: seven months in North Africa, two months in Sicily, two months in Egypt, and two years and six months in Italy, and this time included one period of UK home leave in late 1945, just as the war in Europe was ending.

The diaries are very long and at times very personal. They reflect both what was going on in his personal life, and the battles in and around the theaters where he fought.

As mentioned, he was in the RASC and his main job was to set up Detail Issue Depots (DID) containing supplies for the army for the advancing allied forces moving from North Africa to Sicily and Italy, as the allies advanced against the German and Italian forces.

There are detailed descriptions of battles; travelling by ship from place to place; three bouts with malaria, including hospitalization; stories of death and destruction, and a surprising amount of evening entertainment including visiting artists, movies, dances and of course, like most servicemen, plenty of booze.

I also found a long article written by Dad covering the period during 1944 of the Battle of Monte Cassino and Rome in Italy, with graphic descriptions of battles and his experiences in Rome, and the eruption of Vesuvius. This article is attached as an appendix.

I think that the publishing of these diaries as a book is a fitting tribute to my father on his 15th yahrzeit, to a man who defended his country and spent so many years doing so, under very difficult conditions and far away from his family. The book is dedicated to his memory and to the memory of my mother, Sylvia (Bobbie) Lavender. 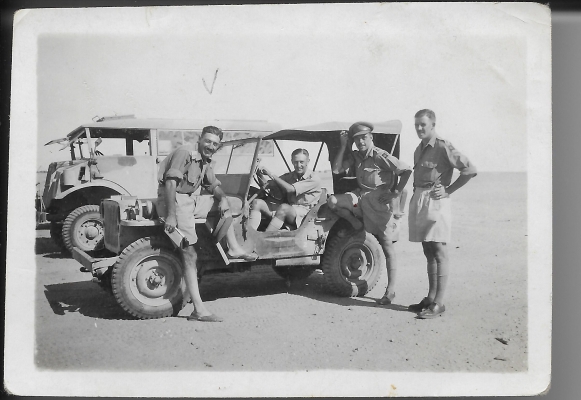 The following transcript is from notes written by David Lavender presumably around June/July 1944. It was found in his personal scrapbook.

I arrived at the new Company Location situated near CAPUA. My DMA was in the ruins of what had been a beautiful 40 roomed villa. It had been a strongpoint and was marked all over by shell holes and bullet holes. We were now part of the 5th U.S. Army and under the Anzacs. Life was fairly pleasant although it rained almost incessantly. Nothing very much happened until March 15th 1945.We were all prepared to do battle and all arrangements were made for the move on Rome. On that day I watched a 3000 sortie attack on Cassino. It was tremendous and felt like a giant earthquake. However all attempts to take Cassino were abortive and it was abandoned for the time. The 4th Indian Division has suffered severe casualties and we prepared to take over their positions.

Vesuvius[1] erupted and we were treated to an unusual spectacle for several days.

I opened a Supply Point at SAN PIETRO. This was a noisy spot and in full view of Germans in the monastery and over the RAPIDO river. We were treated to several spectacular shelling and dive bombing episodes. The S.P.[2] itself was like a rodeo in the mornings. Mules and horses by the dozen were brought in to collect the rations and fodder.

Chas. Ingham and I started welcome days of rest on the SORENTO peninsular at MAORI. This had been made a "battleaxe" town and reserved for personnel of 78th DIV.

We had four very pleasant days visiting all the local beauty spots including the Emerald Grotto at Amalfi.

Arrived back at SAN PIETRO on April 1th and things were much the same as before. I now started sickening for my 2nd attack of malaria and on the 21st I was in the C.G.S. and thence to No. 2 Gen. Hosp. Caserta. I received the usual treatment and convalesced in SORENTO. A beautiful place and in a five (star) hotel run by the B.R.C.S. (British Red Cross Society). I met several friends there including Jackie Moss, for whose future everybody had qualms, which were later fully justified. I arrived back with the visit at a momentous time. The complete 8th Army had come over from the East coast and together with the 5th we were to commence the battle for Cassino[3] and on to Rome. The battle commenced on May 13th with a tremendous barrage and on the 16th I moved forward with my supply personnel. From then on life was a nightmare. We were surrounded by quick-firing artillery and were well on the receiving end. The first night we were bombed severely and once more I thought it was all up. But we stuck it and continued supplying. Two days later we moved up again and crossed the Rapido under a thick smoke screen. I set up my DMA amidst the ruins of burnt out vehicles, dead horses and dead soldiers of both sides. Then came a new experience, air-bursts. Shells which burst in mid-air and sprayed the place with large chunks of white hot steel. All this time we were under direct observation from MONTE CAIRO[4] but fortunately they were keeping it down with smoke. Meanwhile the Poles had taken the other G (il) O.P.[5]– the famous monastery.

My next surprise was a posting order which arrived at 01.30 hours on May 24. This was as O.C.[6] Comp Plus complete with Captaincy to a new Brigade which was due to join the 6th Armoured Division with whom I started active service life in North Africa.

This proved a tough assignment as by May 29th I was back in battle and even worse off than before and still no Captaincy. I stayed with them for about 3 weeks during which we advanced over 250 miles.

I visited ROME on June 10th and found a beautiful city. At this time, trains and buses were running and all the shops were open and full of good things. Later on, the traffic had been put off the road and prices had soared sky- high and the place was fully organized as a rest centre. But the war was still on. We kept moving forward with the new "DMAs" opening all the time until eventually on June 18th whilst operating at TODI[7], I received my promotion and a posting back to my old Division.

The journey from TODI to ORVIETO on the map is about a 2 hour run. It took us 2 days. I was accompanied by my batman and another driver. Owing to heavy demolitions we had to make innumerable detours during which I "liberated" several small villages and got stuck in cart tracks and mined diversions. The first night (June 18th 1944) I was fortunate in getting fixed up with food and a bed in the Chateau of the Marchesa de Roma. It was an interesting experience. The following evening I arrived back at the Company tired out but happy. I got into harness right away and opened up a Supply Point the following day. We stayed in this location which was just south of TRASIMENO until July 5th when the Division pulled out to go back to Egypt for a well earned rest.

The main items which come to mind when I think of these final 3 weeks are not many but all exciting. On one evening I had a lousy load of petrol on fire in the petrol dump. We put that out. The same evening the dry river bed on which was all my supplies became a raging river and we strove for over 2 hours, completely naked, salvaging as much as we could. I got drunk after that and slept like a log. Then we were severely butterfly-bombed one night and several landed in an open-air cinema show at DIV. ACP.[8]

But the happy parting day came (July 5th 1944) and we went way back to TIVOLI, just outside ROME to wait until we were organized to start the long trip to Egypt.

The 10 days at TIVOLI were very hot but we had a good time and were in excellent spirits.

We then moved off (July 12th 1944) to our port of embarkation, TARANTO. We travelled in cattle trucks but made them reasonably comfortable and the journey took 3 days. After one night in Taranto we got on board (July 17th) and moved off (sailed July 18th). I left Italy from the same spot where I had landed nearly the year previously but I'd seen much and became wiser during that period.

[1] Vesuvius – Vesuvius is a volcano which has erupted many times and is the only volcano on the European mainland to have erupted within the last hundred years. Today, it is regarded as one of the most dangerous volcanoes in the world because of the population of 3,000,000 people living nearby, making it the most densely populated volcanic region in the world. See Appendix 10 for photographs of the 1944 eruption.

[4]Monte Cairo - The Cairo Mountain is a mountain located in the Lazio, Frosinone province.

[7] TODI - Todi (Italian pronunciation: [ˈtɔːdi]) is a town and commune (municipality) of the province of Perugia (region of Umbria) in central Italy. It is perched on a tall, two-crested hill overlooking the east bank of the River Tiber, commanding distant views in every direction.