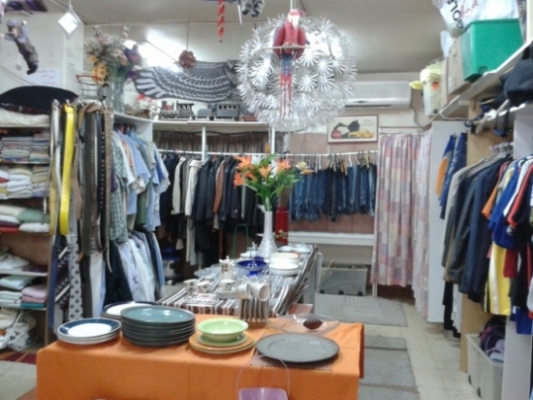 The first ESRA shop I worked at was a tiny little place on Ahuza Street in Raanana, only big enough for two people, each having to hop aside so as to make room for the other, and more importantly, for the customer(s).

Then we moved - lock, stock and barrel - to two other premises in the same area, so we would be easy to find, both by our customers and also by our very important donors.

By that time we had regular "clients", as Motti Wiener, our boss, called them, coming twice or three (!) times a day. Our clientele were new olim from the former USSR, Anglos, Filipinos and Sabras.

They were all astonished by our very low prices, and many continued coming and buying regularly, some to this day!

Motti loved telling jokes, in English of course. He was always happy and in a good mood, and was often seen dancing with a client to music from an old radio that had been "fixed" by a mechanically-minded volunteer.

The donors of our goods were the gracious people, mostly from Raanana, who generously donated their and their children's clothing, small items of furniture, china, linen, kitchenware …. you name it! Most in good condition. The rest was sold by weight to a firm called "Rosie", by our amazing and original unpacker Ruth, an immigrant from the USA, who then and now is everybody's favorite.

Our customers used to queue up early in the morning for the 9am opening. They checked out Motti's beautifully decorated windows, and knew exactly what they wanted to buy.

Motti, the volunteer manager, was a real personality. On a few "fancy occasions" he would get "all dressed up" and then explain to his captive audience that his whole outfit had come from the "shop" at a minimal price, thus encouraging all to do their shopping there.

While I was recuperating from heart surgery, Motti and his wife, Ita, phoned me many times, urging me to return to the shop, a.s.a.p. I soon made a "trial run" and then returned to my previous twice-weekly schedule.

Another unforgettable volunteer was Yehuda, whose "specialty" was jewelry and antiques. After examining articles minutely, he would take them to the appropriate expert so as to evaluate them and fix a price. Yehuda would never reduce prices, even after hours-long haggling. He worked for many years at "our" shop, until he retired to Beth Protea in Herzliya.

We had wonderful volunteers - one of them was Eli. He was a really great guy who worked very hard during his mornings at the shop, but both bosses with whom we worked were always annoyed with him. Why? Because he never announced his "comings and goings". My suggestion was: obviously he worked for the Secret Service … Nevertheless, he was much missed when he left.

Another of our volunteers from the early years was Sruel, who collected donations from all over the Sharon area. Sometimes he climbed up many stairs in tall buildings, then packed everything carefully into his car for delivery to the shop. He continued this hard work for many years, perhaps even up to the present time.

Many of the clients today are the same ones from previous years; the identical twins visit regularly, still looking for bargains, the Filipinos still come, leaving their charges outside in the sunshine while doing their shopping. Many of the men were particularly interested in our "usually" fine selection of watches. The Anglos who visit on a regular basis buy our English books and occasionally articles for their homes, and they are always amazed at our low prices.

I hate to say it, but articles were sometimes stolen from our "charity shop"! Once, a beautiful new set of copper pots with long handles was "taken" in front of our eyes! On another occasion, a beautiful clock was placed on a high shelf behind me - the cashier for that day. One moment it was there – the next it was gone! I wept that such a horrible thing could happen on my watch. Our very special Ruth phoned Giora Fried immediately (on the principle that "the sooner you know, the better"). He was very upset when he returned but at the sight of my tears he soon calmed down and took it in his stride. After all, most of our clients were pleasant, honest people, but there is always a bad apple around.

Later, Motti retired and went home with our best wishes for a healthy and happy retirement.

Our new boss, Giora, took over the reins. He made many improvements and changes in the store, making a big, well lit shop with the shelving better arranged, which made it all more pleasant for clients and staff.

Yes, I retired after 20 years, having enjoyed the time I spent at the shop, with its friendly staff and interesting clients.