Cooking Up a Better Life

The Corona period we are all going through now has given me the time to browse through my old papers (of which I'm a collector). I came across material that brought back warm memories of my days as a cooking instructor to domestic workers in South Africa.

In 1970, my family returned from Port Elizabeth to my home town Pietersburg, now Polokwane, and I became involved with the Jewish community, whose members were very active catering for bar mitzvahs, birthdays, festivals, etc. I had always loved working with food and had attended an International Cooking School taught by Pinkie, an Austrian chef who was a representative of the South African Chef Association. After qualifying, I also became a member of the South African Chef Association. In Pietersburg, I had a free hand in all the catering events and loved my new profession. At the same time, I also continued with Magimix and Kitchen Combi demonstrations, both connected with food.

We had wonderful cooks in the town and were kept busy.

So I started a new profession (I had left ballet behind in Port Elizabeth) and a new chapter was created in my life.

During this time, I was approached by Colleen Skalkwyk, the Chairlady of the Women Power organization to teach local domestic workers. I was asked to teach and compile a book of recipes for these workers so as to empower them with skills which would enable them to receive better salaries.

This was a time of apartheid and in general, the salaries of domestic servants were a pittance and their working hours very long and arduous. Often they were expected to work a 12-hour or longer day. Many would have to leave home at 5am to be at work to serve their "madam's" and "master's" coffee at 7am. ( I'm sure many of you have seen the film "The Help"). This was what apartheid was like in South Africa.

The servants would get up at 3am to do their own chores at home and see to their children and were expected to be cheerful when they arrived at work. Their chores were cooking, cleaning, laundry, doing the beds and more. 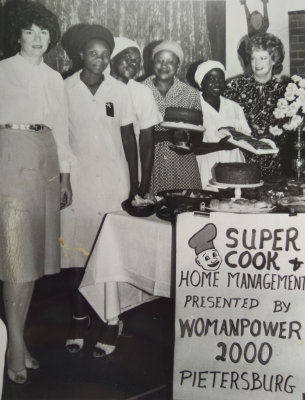 Most were illiterate, and had not had the privilege to attend school. It was a challenge.

I taught in English with Mrs. May Fergusan, who translated my lectures into Afrikaans and Sotho, the local African language. Each course lasted for three months and accommodated 30 students.

All the recipes were printed in both Afrikaans and English for their employers. The administrative work was done by May Ferguson whose daughter Eileen Schofield was one of the founders of Women Power.

After each lesson, the students had to prepare food for the following lesson. The students, many of them too poor to have shoes, were so keen that it was a pleasure for me to teach them and I looked forward to each lesson. I taught all the recipes using a wooden spoon or hand beater, as their employers would not allow them to use electric machines in case of breakages.

The results of their cooking were truly amazing. At the end of the 3-month course, they would take a test presented by another member of Women Power, (an offshoot of Manpower), Colleen Skalkwyk, with an oral paper. I invited chefs from the South African Chef Association in Johannesburg and local chefs to come and judge their cooking.

After passing the course, they were presented with certificates by Colleen and Eileen. The course was so popular, taught in a Methodist church hall, that it was always full. The school appeared several times on South African TV as a news item. I gave these courses for 10 years and stopped when we made aliyah to Israel. Unfortunately, no one replaced me. This really saddened me, until today, when sorting out my papers, I found a letter from a principal of a school for black students in a rural area outside Pietersburg/Polokwane, saying that they were teaching my course to their own pupils. That made my heart sing.

Then I found an article in a newspaper about one of my students who was making a living selling my fried fish in the township where she lived. And there was yet another article about one of the women making wedding cakes.

The years of teaching were not wasted. It empowered the women and men with knowledge and gave them higher salaries, which was the aim of Women Power.

I loved teaching. How lucky I was to have been given this very satisfying job from Woman Power and had the opportunity to make a difference.