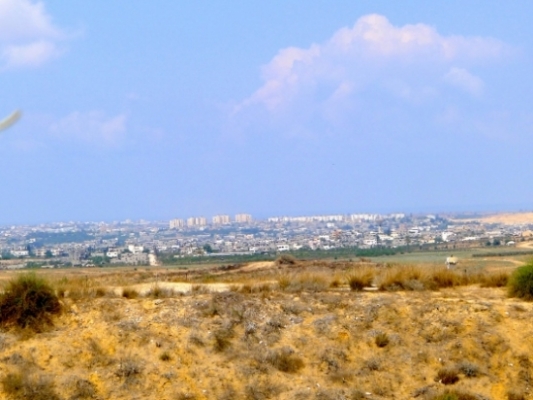 A view of Beit Hanun from Kibbutz Nir Am. Photos: Adrian Wolff

I have traveled though the western Negev on many occasions, either as a licensed Tour Guide to show the area or as a cyclist riding off-road through over 30 kms of poppies in the annual January-February Scarlet South Festival.

I knew this area from the other side during the many months of my military service in Gaza, during which time I had been in every town, village and refugee camp. As a member of the Israel Military History Society, after Operation Protective Edge I signed up for a professional trip to visit the communities, to meet with the security personnel, heads of kibbutzim and people living in these areas most affected by the mortar fire from Gaza during the 50-day operation. Previously, I had participated in a professional tour, visiting both the southern Kerem Shalom Crossing for 'goods' and the northern Erez Crossing for 'passengers.

After the dash from Tel Aviv, our bus stopped at Yad Mordechai junction for a welcome coffee break. Route #232 flows though green, lush agricultural land. The Zionist pioneers changed those dry lands into vibrant, economical, agricultural lands where potatoes, sweet potatoes, peanuts, citrus, sub-tropical fruits are grown using both fresh and recycled water originating at the 'Shafdan' Palmahim plant for waste-water just south of Rishon Lezion (www.igudan.org.il). There is also evidence of the natural desert: the land is sand, fine loess sand, which rises when you walk, bellowing up above a motorized vehicle's wheels.

In 1943 the Jewish Agency Zionist Executive established three outposts, Revivim, Gevulot and Beit Eshel in the Negev. Their existence influenced the United Nations 1947 decision to include the Negev within the borders of the soon to be established State of Israel. Virtually no Jews lived in the western Negev other than in the three outposts. Immediately following completion of the Yom Kippur fast in 1946, the Jewish Agency simultaneously established 11 new settlements within 24 hours, defining the future border in the south. The new settlements were Kedma and Gal-On near Kfar Menachem and Kiryat Gat of today; Shuval and Mishmar Hanegev further south; Nevatim and Hatzerim near Beer Sheva; Urim in the western Negev and four points - Be'eri, Tekuma, Nirim bordering the Gaza Strip close to Khan Yunis, and Kfar Darom in Gaza. 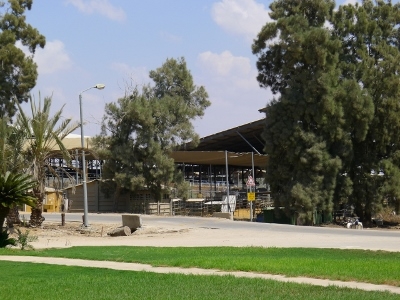 Kibbutz Sa’ad with cowsheds in the background 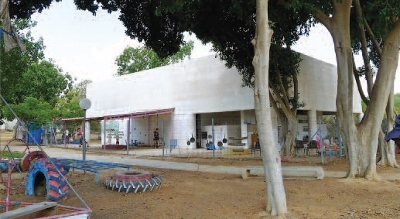 A nursery school at Nirim

Our first stop was at Kibbutz Nirim (founded in 1946), on the border with central Gaza, opposite Khan Yunis. We were hosted by a member of the kibbutz council. On 17 May 1948, the Egyptian Army attacked Nirim. The kibbutz, built as a fortress, resisted the initial attack while every building above ground was destroyed and eight young defenders were killed before the Egyptians withdrew. Nirim was rebuilt several kilometers north of the original settlement. An ancient synagogue, Ma'on, with a mosaic floor is located here. At Nirim the security officer and his assistant were killed in the final minutes of Operation Protective Edge while repairing an electricity transformer, damaged by a mortar. Their deaths and the very serious injuries to two other members during this episode left an indelible imprint on this kibbutz of how fragile their lives are so close to the border.

Every building has its own secure room. 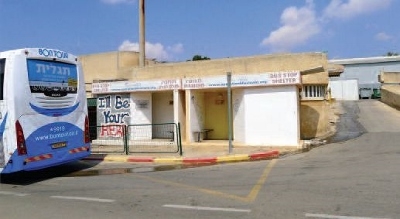 A bus stop shelter at Nir Am

Shelters are found along the paths, next to playgrounds. The nursery school has a security wall facing Gaza, with a reinforced concrete roof. The residents have less than 15 seconds to find shelter, which influences every decision regarding mobility such as whether they should walk to the next building, around the corner of a building, whether the children can play outside and so on.

At the start of hostilities, a decision was made to encourage every resident, especially children, to leave. Essential staff and outside workers remained because cows had to be milked daily, etc. We were told of the warm kindness shown to the members by foster kibbutzim in other parts of the country. As it was school holidays, the Kibbutz Nirim children were invited to join the resident children in their various holiday activities. 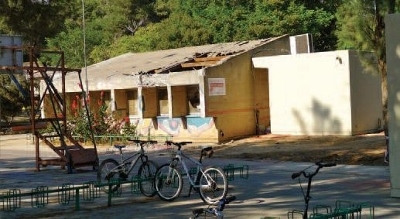 Nevertheless, the members wanted to return home and not live as refugees in a host location. Their problems began when the government and army said they could return to their homes, only to be caught up in the most severe shelling during the final week of the war.

Kibbutz Nir Am, founded in 1943, defended the Negev from the invading Egyptian Army in 1948. The kibbutz, adjacent to the northern Gaza border with Beit Hanun, has a nature reserve with typical desert vegetation and local flora. Hamas terrorists popped up in this area. Once again, shelters are found in every building and along the paths. (See photo of the bus stop.) Like all the communities, the kibbutz is surrounded by a high barbed-wire fence and soldiers are seen within the grounds. Nevertheless, the kibbutz has begun to parcel out land for future housing construction.

At Kibbutz Kfar Aza, founded in 1951 by Egyptian Jews, we were hosted by a member and the security officer. We stood next to homes which face onto Segayia. The green fields and hay stacks designate the border. Some of the homes were damaged when mortars landed in the grounds and one building received a direct hit. This kibbutz, like others, has suffered from continuous shelling over the past 14 years. There is a small soccer field with a shelter at the side. During Protective Edge, children dashed inside just in time when a mortar landed in the soccer field. This kibbutz, besides growing various field crops, produces bags that cover bananas while they grow, to protect them from the sun, birds and insects. Part of the production process fertilizer is injected into the bags which the banana bunch breathes in. Nativ Ha'asara, founded in 1982, is a moshav between Kibbutz Yad Mordecai and the northern border with Gaza opposite Beit Lehia. 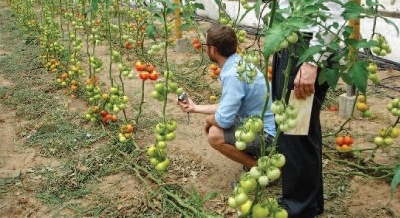 The original settlers moved onto these dunes after being evacuated from Sinai following Israel's withdrawal from Sinai in 1980. Many of the children have remained on the moshav, which has over 1500 dunams of hot-houses. A few weeks before Protective Edge, the moshav announced the parcellation of land for construction of 71 new homes. They were all taken up within two weeks. Agriculture production on these dunes of export quality vegetables is highly successful. Although the Ministry of Agriculture had erected igloo-shaped shelters at the hothouses to protect the workers, unfortunately, one Thai worker was killed during Protective Edge.The close proximity to Beit Lahia made this moshav very susceptible to mortar fire, easily directed by spotters sitting in the high-rise buildings opposite. 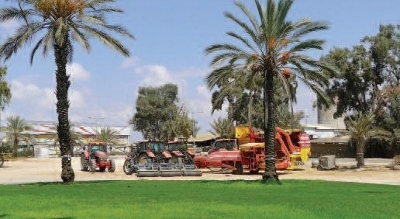 A view of Kibbutz Sa’ad 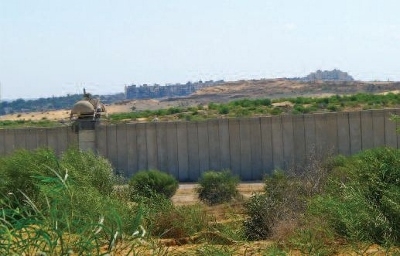 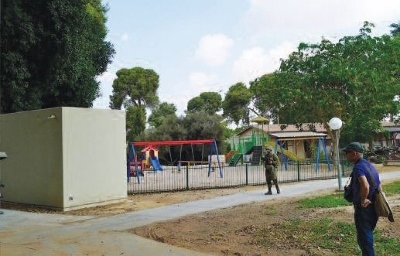 Kibbutz Nirim with a shelter in the playground

These buildings were all damaged by IDF shell-fire (see photo). There are walls and fences surrounding the moshav with security cameras and pill-boxes housing both cameras and machine guns controlled by remote controls in a separate operations center.

On this trip, we saw the homes, the agricultural lands and repaired buildings with the various communities returning to their lives. I came away filled with pride at how the members of all these communities have made the desert bloom and made successful lives under very harsh physical conditions and periodical wars. The expression "All Jews bear responsibility for another" very much relates to these communities, as does the feeling of belonging to The People of Israel, with the common goal of building the country.