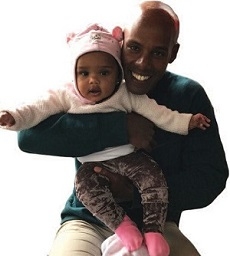 It's as if we'd come full circle. Let me explain. Those of you who know me may remember that my children grew up in ESRA, visiting with me the tens of social programs in the afternoons, hearing me talk about their importance, and how we were changing lives. Nineteen of these programs were in Netanya. Little did I know then that I would be living next door to two of the neighborhoods where ESRA was, and is, so active.

Now, more than ten years down the line, my daughter Sharon has joined a local running group which, to my great surprise, gets her out of bed three times weekly at 5am come rain or shine. She raves about the trainer, how he is supportive, intuitive, charismatic and so very positive. And then I met him and we chatted, and I too fell under his charm as I heard his story.

Thirty-three-year-old Asher, the youngest of seven siblings,was born in rural Ethiopia.He came to Israel aged seven and settled in Netivot. The family's journey to Israel was traumatic, including the kidnap and killing of the eldest brother, traveling from village to village to avoid authorities and gangs, and a year's wait in Addis. The trials they experienced seem to have contributed to mental health issues for his mother and three sisters in particular. During prolonged periods of family illnesses, it was Asher who from a young age stepped up as the primary carer. A heavy load for young shoulders.

During 7th grade, Asher discovered running and felt relief, freedom and a chance to excel.By 9th grade,he became Israel's champion. His trainer encouraged him to pursue sport and felt that he needed a supportive and stable life. So he arranged for Asher to go to Kfar Silver boarding school. Asher failed the interview, as the entrance exams revealed that he was illiterate and, in his own words had, "just been keeping a seat warm at school". With fantastic efforts by the headmaster and his staff, Asher completed matriculation and gained confidence as he continued to run. His army service was on the sportsmen track, including annual trips to Ethiopia for training.

Meanwhile, his mother died and the family's problems continued to mount. His sisters are single mothers and, in total, there are 27 nieces and nephews, all seeking a mentor or role model. Asher sees his vocation and steps up, going to parent-teacher meetings, checking homework and being the most positive role model he knows how to be. Today, four of the nieces and nephews hold BAs and another is studying.

Asher wanted to study but needed to work, so he combined both while taking university preparation courses, all of which he failed. Not deterred, he tried again and again. He graduated from Wingate in Sports Education and campaigned to be allowed to start the MA program, despite only having an average of 68. He just didn't give up, in the same way that as a child he was kept in 2nd grade for three years. He has also completed several courses including massage and reflexology, which he learned in order to relieve his mother's pain during her illness.

Asher's first year as an MA student was enabled by a grant through ESRA's Students Build a Community program. This experience of giving back to the community after receiving so much support from others in his life set him on a path to becoming a school P.E. teacher. ESRA showed belief and gave him the tools to become the role model he wanted in order to prove to the young children that everything is possible. Asher's many failures, endless determination, desire to be the best person he can be and, now, the best husband to Sassu, a student of Social Work, and father to 5-months old Yuli, are expressed in the widest of smiles and positive talk.

So, the circle has come around. Those ESRA once helped are now helping my family. Asher is inspiring my daughter and her fellow runners, showing that one can push oneself to new limits, work toward goals, discover inner strengths and commitment, and that all is possible. Running maybe the tool but Asher is teaching a lesson for life. He knows that life is a series of challenges, but he has a road map to steer his way through combining sport and soul.

I'm not sure that Asher has heard of Robert the Bruce but his words may resonate, "If at first you don't succeed try, try and try again".