Chatter and satisfaction at the Netanya Sewing Centers 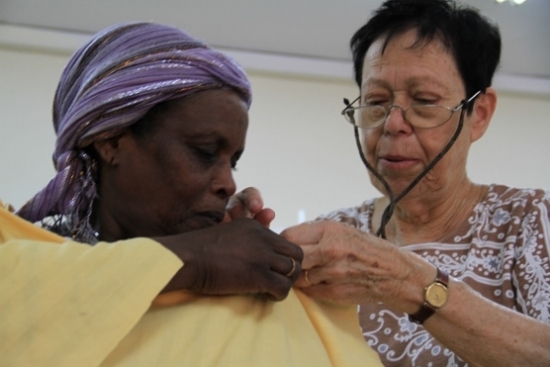 For the past two years I have been helping in the ESRA sewing center in Kiryat Nordau, Netanya, where a good majority of the population is Ethiopian. It has been in existence for 16 years and that is definitely thanks to the teacher, Varda Mendelson.

Once a week ten Ethiopian men and women meet there from 09.00 till 13:00 to learn to sew their own clothes and to mend their children's clothes. They sew their own pyjamas, nighties, dresses, skirts, shirts, pants and even ...gatkes

Some of the ladies from the group work on embroidery (for which they are paid) which is used for the hand towels, mezuzahs, and bags which ESRA then sells.

My job there is to pin and cut. Sometimes I need to unpick a scraggly seam or even sew the seam myself. And I mustn't forget Anita, a wonderful volunteer who comes from Canada every year for a period of six weeks, and who has been doing this for the last six years.

There is a range of ages at the center: young mothers, middle aged people and even 80- year olds.

They all love to come to the center, there's always a hum of chatter as they work, a bit of translation from Varda since some of them don't know any Hebrew and a lot of satisfaction when they see what they have produced.

There are enough machines for everyone, although some are very old and always need repairing. They have either been donated or bought through funds which were raised by ESRA. 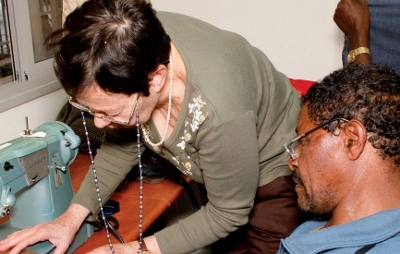 Now, that word 'repairing'! Well, we used to have a volunteer technician who was always on call, but now he has retired and we have to pay for repairs, so if you happen to know of someone...

The material too is all donated by private people or factories.

A few words about Varda.

She is paid to teach the people at this center, but this is only one of her roles.

As a teacher, I have seen her explain something over and over again with great patience.

I have seen her praise someone for her work even if it is only a simple straight seam. And when she sees that one of her pupils has truly progressed, she will encourage her or him to try their hand at a more complicated pattern.

Then there are her roles as: social worker, mother, comforter and problem solver.

This is a population with many problems, but with scant knowledge of to whom they should turn if the need arises. So they revel in the emotional support and the general guidance that Varda gives them.

She will organize a doctor's appointment for one of the ladies. She will take time to listen to the family problems of another.

When we took the sewers to Bar Ilan University for eye checkups, I watched Varda fuss over each and every one of them like a mother hen to make sure they were all tested and fitted with glasses.

Varda often tells me she's pleased everyone is willing to come to the center and learn, but of course, they also come because they know she's there and she cares.