Candles Lit for Those Who Perished 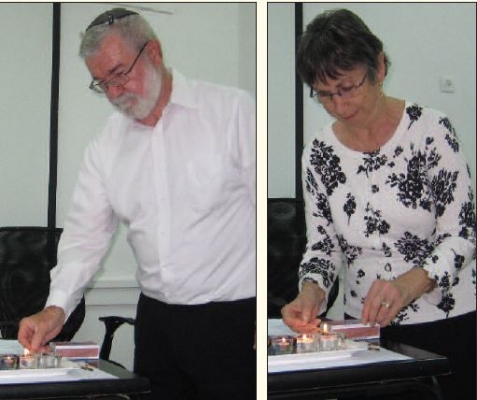 Second generation Holocaust survivors Zvi Berkovitch and Judy Goldstein each light memorial candles at the Modiin ceremony in memory of the six million Jews who perished at the hands of the Nazis (Photos: Flori Cohen, Sruly Cooper, Avraham Rotstein)

The Holocaust was an atrocity carried out by a monster of evil, Adolf Hitler. May we never forget.

The Modiin Anglo community's Commemoration of Yom HaShoah was arranged jointly for the second consecutive year by ESRA Modiin and the Hadassah-Israel Levonah Chapter in cooperation with the Modiin Municipality, in a show of unity to mark the somber occasion.

On Monday evening, April 24, some 120 people from both organizations attended the event, and were welcomed by Rivkah Cooper, Co-President of Hadassah-Israel Levonah Chapter and Jackie Klein, former co-Chair of ESRA Modiin.

The evening featured speakers whose presentations were especially selected to honor the lives of the six million Jewish men, women and children who were murdered during this horrific period of Jewish history.

Shlomo Pazzy, Deputy Mayor of Modiin-Maccabim-Reut, a history scholar, elaborated on the tragedies of the Holocaust, and spoke of his admiration for the youth of Modiin and the high percentage of volunteers and volunteer organizations in the city.

A particularly moving portion of the evening occurred when Ruchama Berkovitch, Hadassah board member, invited six people to light the six memorial candles, divided equally between Holocaust survivors and second-generation representatives, in remembrance of the six million.

Dr. Shantall provided a forceful and passionate overview of the human spirit's will to survive under the direst circumstances.

She recalled how, through Frankl's teachings, she was able to help the many survivors overcome the horrors and tragedies of this period and to rise from such unfathomable depths of suffering.

In her courses on Logotherapy, Dr. Shantall continues her work in helping many from all walks of life.

Gerry Wine related to the Shoah by reading two poems written by survivor Alexander Kimel, who was born in Podhaje, Galicia, in the late 1920's.

In May 1943, Kimel managed to escape from the Rohatyn (Rogatin) ghetto before it was destroyed. He lived in surrounding villages and forests until reaching America.

Here is a short excerpt from one of his poems:

The Action in the Ghetto of Rohatyn, March 1942

Do I want to remember?

The peaceful ghetto before the raid:

Mothers searching for a piece of bread

No, I don't want to remember, but how can I forget?

Do I want to remember, the creation of hell?

The shouts of the Raiders, enjoying

Cries of the wounded, begging for life

Faces of mothers carved with pain

No, I don't want to remember, but how can I forget?

Such inhumanity as described here is difficult to read and even harder to comprehend. 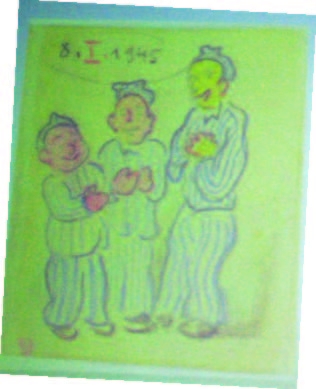 Found in a ghetto ... a hand-drawn birthday card, now at Yad Vashem 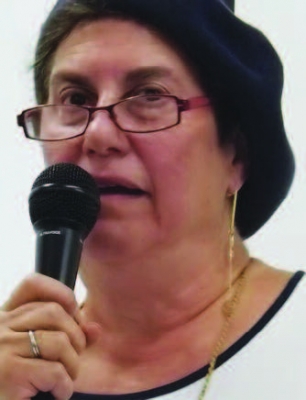 Sara Shor reviewed just one artifact (among the thousands at Yad Vashem) by way of illustrating the exhaustive measures that are invested to discover the names, stories and circumstances of the lives of Jews who perished.

The item in question was a beautiful and creative hand-drawn birthday card that was presented to the Museum by someone who had found it in one of the ghettos.

The recipient's name was not included, only those of three people who had signed it. Sara described how important it was for them to scrutinize even the minutest detail. After much time and effort, they were able to decipher the place and connect the givers to the recipient, although further investigation was still required.

Yad Vashem is a 'must-have' and a 'must-see' to ensure that the horrors of the Holocaust will never be forgotten or happen again.

​Dedications in memorial were read out by Carol Lipman, Membership Chair of ESRA Modiin, and was followed by the presentation of certificates to the speakers and presenters by Harriet Spitzer, Co-President of Hadassah-Israel Levonah Chapter.

This impressive and moving evening was concluded on a brighter note with the very lovely voice of Cynthia Barmor's granddaughter, Achinoam Rotstein, leading participants in the singing of Hatikvah.