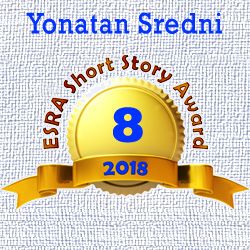 "It won't be so bad," my brother-in-law had assured me when he handed me a Sports Illustrated magazine he had picked up in the US for me to read on reserve duty. "It doesn't really get that hot in the South until August, and you're going to be there in May. You'll be fine." How I wished he could've changed places with me. He had never even been to the Ketziot base. I doubt he even knew where it was. We were closer to Egypt than to Beer Sheva.

I slithered out of my army-issued sleeping bag and carefully eased my way out of the bed, careful not to bang my head against the top bunk – again. I stripped off my red 49ers sweatpants and changed into a pair of brown shorts. I took off my blue Lufthansa sweater (my dad traveled so much we had a dozen of them) and put on my olive-colored army undershirt. I removed my socks and reached under the bed for my San Francisco Giants flipflops. My mom had bought them on her last trip to the Bay Area for $4.99 at Macy's – a real bargain.

I stepped outside the barracks and stretched my arms way over my head. The Negev heat was out at full force and it was barely 11am. My last guard shift ended five hours before and my next one would be in three. What the hell were we guarding anyway? Sometimes a stray camel would approach the fence – very exciting.

I considered taking a shower, so I grabbed my Coca Cola beach towel and my shower kit, but as I approached the bathroom I could see that two of the stalls were occupied and the third wasn't working at all. Welcome to the Israeli army.

I went to the mini kitchen / supply closet, looking for something to tide me over till lunchtime at one o'clock. Flies buzzed around the old fridge which contained a couple of Israeli yogurts, four green apples, and some 'mystery meat' resting on a green army salad platter. I closed the fridge and rummaged around the cardboard boxes looking for a lone cracker, a forgotten cookie, a discarded croissant, anything.

I considered opening a can of luf, the Israeli army's version of spam, but then thought better of it. I kind of liked luf, but was ashamed to admit it. Luf was for emergencies only, but I liked canned meat. I inspected the can, which had a cartoon on it of a soldier pointing a finger in the air. Then I realized I didn't have a can opener, so I went back to the fridge and grabbed the least disgusting apple I could find and took a bite. I sat down on the bench outside my room and watched Danny and Itzik, who were in the midst of yet another game of backgammon.

They had been playing for hours. Itzik would toss the dice and Danny would pick them up before his opponent could consider his move. Itzik was deliberate, but Danny, a huge bear of a man, played fast.

Danny was a bus driver from Eilat. On reserve duty he was a jeep driver. I never learned how to drive a stick shift, so I was a guard. Danny often drove me to the guard tower on the far side of the base, always taking the bumpiest route possible.

My most vivid memories of playing backgammon were associated with family summer vacations in Lake Tahoe when I was a kid. My dad bought a backgammon set that came in a leather briefcase. During that summer, he taught my sister and me how to play. We'd take that case to the shore of the lake and play for hours and hours. I think that backgammon briefcase is still in a closet in my parents' basement somewhere.

Meanwhile, Fishinzoin was sitting on a bench struggling to read a Hebrew newspaper. He was a tall, pale, skinny, blond Russian kid, maybe 19 years old – 20 tops, with coke bottle glasses. He looked like an albino, but I couldn't prove it. I never actually saw him out of uniform. He even slept in his army boots. Wearing his little green army cap he looked like either Forrest Gump or Gomer Pyle; I could never decide which. Itzik, my bunkmate, had decided that he looked like a nerdy character in some 1980's Israeli cult movie entitled Alex Choleh Ahava, named Fishonzoin, so that's what he called him. He had told us his real name the first day we arrived at the base, but for the life of me I couldn't remember it. It was definitely a Russian name. I was sure it would come to me if I started alphabetically – Alexander? Boris? Dimitri?

Fishinzoin had said the reason he was there was to raise his army profile. The army said he'd have to spend three weeks in a closed base doing guard duty and then they'd reevaluate his situation. I tried to figure out what kind of medical or psychological condition one could have which could only be remedied by staying on a closed base – homesickness perhaps?

Fishonzoin always guarded the nishkiya where all the guns were kept. Somehow to the Israeli military it just made sense to have the weirdest guy possible guard all the ammunition on the base.

But what was his name? Igor? Mikhail? Nikolai?

Danny and Itzik both smoked constantly. I never smoked in my life, and at 26, I was probably too old to start. I didn't even know how to hold a cigarette.

At 11:45, after losing four straight games to Danny, Itzik got up from the picnic table and went to make himself another cup of coffee.

"Get back here, loser!" Danny called after him.

"I've got to go guard now. Go find yourself another sucker," he called back.

Danny scratched his hairy chest and adjusted the Jewish star around his neck.

"Fishy!" He called out to Fishonzoin. "You want to play? Or do you Russians only know how to play chess?"

Fishonzoin shook his head. "I also have to go guard soon."

Danny turned his head and spat. "Well, Fishy, if you're not going to play, go make me some tea with nana!" he barked.

Fishinzoin rose, adjusted the strap on his M16, draped it around his neck and headed off to wherever one might find nana (mint leaves).

I felt bad for him. Sergei? Shasha? Vadim?

Danny then set his eyes on me.

"No, I don't think so. I haven't played shesh-besh in years."

In the Israeli army, and especially during reserve duty, you either pick your own nickname or have it chosen for you. Since I was from the San Francisco area, Itzik and Danny had dubbed me "California", which was fine with me. Well, not really, but it could have been worse.

"Nu, California?" Danny was getting impatient. He pronounced the word with a sharp K. "Just one game."

"OK, just one game," I reluctantly agreed. I had nothing else to do.

"Just one game, I swear." He licked his lips as he quickly set up the board for a new match.

He slapped a die into my palm. "Throw it!" he ordered.

I tossed a four. He tossed a six. "I go first, California," he smiled and proceeded to blow a cloud of smoke into my face. I tried not to cough, but couldn't.

Danny moved fast, at least too fast for me. He would roll, and then quickly palm the dice before my brain could register what he got.

He moved his pieces around the board with surprising agility for a man with such stubby fingers. He grew impatient with me as I would slowly figure out my moves, counting spaces with my fingers.

"Here and here!" he pointed angrily. "THIS is the best move for you." Sometimes he even moved my pieces for me.

He gave me advice on what NOT to do. It was obvious he was annoyed playing against such an amateur. Itzik and Danny had played three games in the time it took us to get halfway through our one game.

"Just to teach you a lesson," Danny scolded as he captured one of my pieces I had left unprotected. Danny was already starting to take out his pieces while my piece was still stuck on the bar.

"If I get all my pieces out before you get any out, it's called a gammon," he laughed as he took two more pieces off the board.

Danny was so busy gloating, he left one piece unprotected. Somehow, I captured it and sent his piece back to the bar.

"A minor setback, California, you still don't stand a chance."

Slowly and methodically, I started taking my pieces off the board. A double six netted me four pieces, a double three another four.

But Danny wasn't worried. He soon managed to move all his pieces off the board save one.

"Nice try, California, but too little, too late." He chuckled.

I tossed the dice and rolled a pair of fives. I slowly took my last four pieces off the board.

Danny stared at his lone chip. It was just a mere three spaces away from joining its brothers off the board.

With my adrenalin pumping, for a brief moment I actually considered it. After all, I had beaten him once already. But I had to ask myself one question: Did I feel lucky?

The alarm on my watch beeped twice - high noon.

I shook my head. I carefully and quickly got up from the picnic table, stuck my hands in my pockets, turned, and started to walk away.

"What's the matter? Are you afraid?" he called out from behind.

Was he actually calling me 'chicken'? When did this turn into a Western?

But this "Frisco Kid" kept on walking.

I stopped, but did not turn around.

When a pitcher hits you with a high and inside heater you have two choices: you can either charge the mound or walk to first. I chose to walk.

I shook it off and took another few paces, determined to "take my base".

I stopped and turned around.

He smiled. I smiled. He quickly started setting up the chips for another game.

He was about to say something, but I was quicker on the draw. I pulled my index finger from my pocket like a real luf soldier and pointed it right at him.

He froze. My finger was aimed at his nose.

I went back to my room and stretched out on my bed and picked up the Sports Illustrated.

I smiled behind the magazine and leisurely flipped through the pages till I got to an interesting article about Ron Hunt. Hunt was a baseball player who made a career out of getting hit by pitches. He rarely charged the mound. If he got hit, he just turned the other cheek and trotted off to first base.

Fishinzoin came back with the nana for Danny. I took the nana from him and patted him on the back.

Out of nowhere, it had hit me. Victor! His name was definitely Victor.

"California!" Danny screamed from outside.

Suddenly the heat wasn't so bad.