Bureaucratic Hurdles After the Death of a Spouse 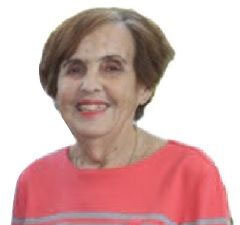 Annice Grinberg who passed away in July 2018

When my wife, Annice, passed away we had been married two months shy of 58 years; my loss was (and still is intense). From the very beginning, it was necessary to cope with Israeli bureaucracy, attending to the many things that were related to her passing.

There were four specific issues and I would like to share them with readers so they will know what to expect and to help mitigate some of the pain during this stressful period. We shouldn't know from such occasions.

My wife died on Friday, July 13, 2018 at Harzfeld Medical Hospital, Gedera. The funeral was on Sunday, July 15 in the Rehovot cemetery.

At Harzfeld (and no doubt at other hospitals throughout the country) there is an organization (or person) that can make practically all of the arrangements needed with the Chevra Kadisha. On that Friday after we were called by the Hospital to inform us of the tragic news, we arrived at Harzfeld and, among other things, were asked if we wanted to avail ourselves of that service. We agreed, and two people from a Kiryat Malachi organization arrived and made most of the arrangements so that all we had to do was to arrive at the cemetery on Sunday 15 minutes before the scheduled time for the funeral. (The latter was agreed upon by telephone with the Rehovot Chevra Kadisha.) The cost for this service was NIS800.

Prior to the funeral we received several telephone calls from the Chevra Kadisha on July 15 relating to questions and giving the options of a single grave, reservation of the adjacent plot for myself or for the double grave, one on top of the other, as well as religiosity and preference for which section of the cemetery will the grave be located, as well as other questions such as year of aliyah, etc., - all at a very stressful time for my immediate family and me.

Incidentally, if we requested the "religious" area, we were told that we would need a letter from the rabbi of our shul – no extra charge for this location.

Families should discuss these matters well before the need arises; the less stress on the surviving spouse or children, the better.

The death certificate is automatically issued by the Ministry of the Interior (Misrad HaP`nim). It can be obtained in three weeks from the local Ministry of the Interior. I went to the Rehovot office after three weeks and two days, bringing my wife's ID (and mine as well). I asked for and received 10 copies. The clerk also changed my status from "married" to "widower".

As we had not received a release form from Harzfeld Hospital where my wife had died, I drove there the next day to try to get this document indicating the cause of death. After finding the right person for the request, I was told that I had to bring or fax a copy of my wife's will (to make sure that I was the heir, I guess). I returned to Harzfeld with the Will and received an original of my wife's release form, which included the cause(s) of death. That, in itself was extremely traumatic for me to read how the disease had spread from its original right-lung location.

Armed with the release form, I returned the next day to the Ministry of the Interior, and asked if they would include the cause of death on an amended certificate, emphasizing why I needed its inclusion. The clerk checked with a superior, and said that they would submit the request (with the Harzfeld release form to the Jerusalem head office for consideration, and that it could take up to one month. However, within one week, I received a telephone call that the revised certificate (containing the cause of death) was available, and I was able to get 10 original certificates.

At some time following my wife's death, a letter arrived from the Ministry of Transportation addressed to the heirs of the deceased, indicating that the heirs are entitled to a partial refund of the fee paid for my wife's driver's license. The accompanying table showed that the refund would be NIS 93. To get the refund, the heirs needed to complete the enclosed form and attach a copy of the "succession order or probate order, as the case may be," along with a photocopy of a voided blank bank check. This meant waiting several months until my wife's will was probated. I guess that I could have brought a copy of her will (from 1983), but they might think that there could have been a more current one that differed from this.

When I went to the local branch of the Ministry of Transportation to submit the form for my driver's license renewal, I asked the clerk about the procedure for the NIS 93 refund. She confirmed that I would have to submit the probate order.

On a later date, in checking my bank transactions, I noticed a NIS 31.35 credit (one of three), relating to driver's license. Could this be the same NIS 93 for which I supposedly need the above-indicated documentation?

Some other Bureacratic Issues

If you and the deceased have joint bank accounts, you will still have access to the account for "normal" activities, but not for "major" transactions. That is, until the will of the deceased has been probated in court, which can take from six to eight months.

Major action on jointly-held property must also await probate of the will of the deceased, e.g., apartment, automobile.

I have yet to cancel my wife's subscription to her portable telephone (012), but it appears that this can be done on-line.

Ira Grinberg has indeed endured some stressful experiences which must have intensified his grief during this period of mourning. I offer my deepest condolences.

Having gone through this myself when my husband David passed away in July 2017, I can add that dealing with the insensitivity of the system at Bituach Leumi significantly added to the stress and amount of paper-work.

The Ministry of Interior automatically informs Bituach Leumi and sends them the death certificate. If the deceased was receiving any benefits, home help, reductions in Arnona and road taxes etc, all these benefits are immediately cancelled, as is the Social Security State Pension.

It then takes them up to two months to adjust the surviving spouse`s pension to include 50% of that which had been received by the deceased. In addition, Bituach Leumi reimburse the basic funeral costs, approximately 8,600 shekels, a procedure which also takes up to two months.

If the deceased had received disabled drivers' rights, parking, discount on road tax, etc, they must be notified personally and those rights are cancelled immediately.